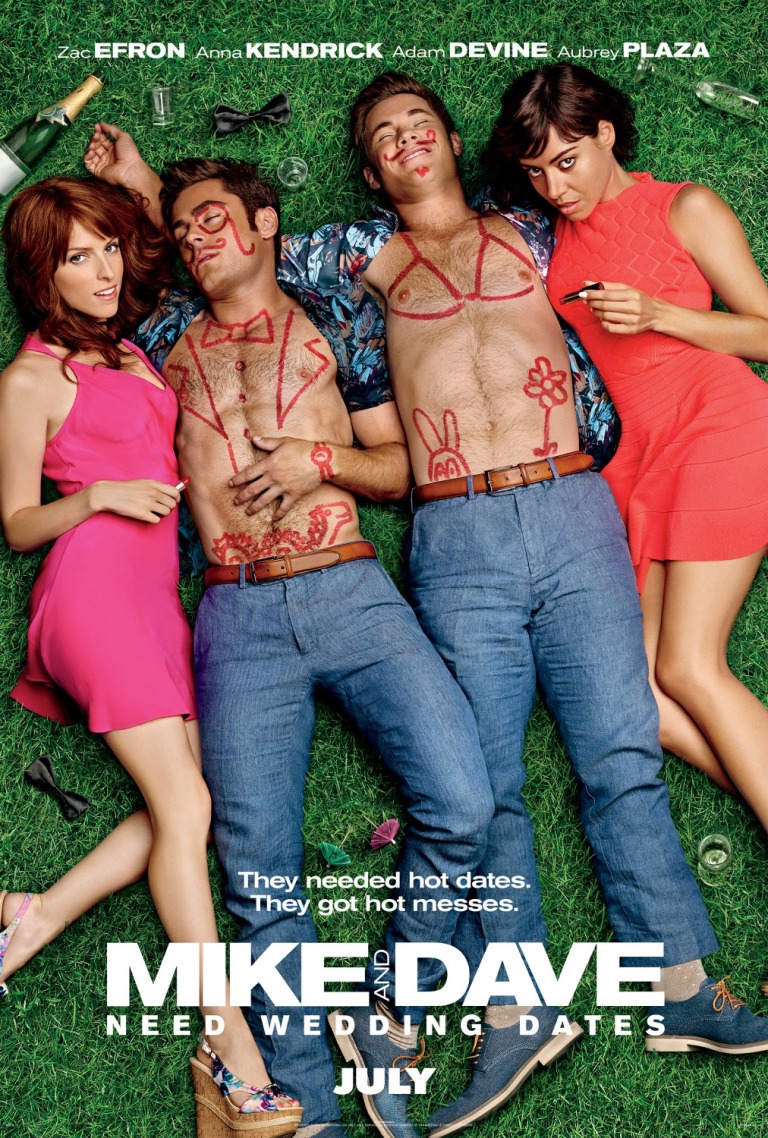 Mike and Dave Need Wedding Dates is another raunchy comedy hitting theaters, but will this one break the mold and be both funny and a good movie?

Mike (Adam Devine) and Dave Stangle (Zac Efron) are brothers who have a penchant for ruining family get-togethers with their wild antics. So, when their sister, Jeanie (Sugar Lyn Beard), plans a destination wedding to Eric (Sam Richardson) in Hawaii, the Stangle parents, Burt (Stephen Root) and Rosie (Stephanie Faracy), demand that Mike and Dave secure wedding dates to keep them in line at their sister’s wedding. The boys will do anything for their little sister, so they agree. They proceed to put an ad out on Craigslist and get a string of women looking for a free trip to Hawaii. When they appear on the Wendy Williams Show, they are seen by Tatiana (Aubrey Plaza) and Alice (Anna Kendrick), two young women who just got fired from their waitressing jobs and can safely be identified as alcoholics. The girls decide they’re going to trick Mike and Dave that they’re “good girls” and get them to take them to the wedding. Their plan works and as the façade falls away a bit more each day, Jeanie’s wedding becomes more and more of a disaster.

Written by Andrew Jay Cohen and Brendan O’Brien and Directed by Jake Szymanski, Mike and Dave Need Wedding Dates is inspired by true events—yes, Mike and Dave Stangle are real people—but that doesn’t change the fact that the premise is really, really stupid. “Hey, bring these complete strangers to your sister’s destination wedding!” Right, that would happen. Still, there are several hilarious scenes in this film. If you like raunchy comedy, you will definitely be laughing throughout. The biggest problem for the film, and this has been an ongoing problem with several comedies as of late, is that any emotional moments in this film are completely unearned. Tatiana is a completely remorseless party girl who instantly turns on a dime and starts feeling bad about her actions simply because the script says it has to happen. I’ve seen Aubrey Plaza get a little weepy on Parks & Recreation, but she totally misfires on selling it in this film. It’s probably because her character is a complete caricature and the filmmakers are trying to turn her into a real person right before our eyes. I had the same complaint with Tina Fey’s character in last year’s Sisters—another funny film that utterly failed in selling anything more than wacky comedy. The best comedies are either completely absurd (Anchorman, Airplane, Caddyshack), or are funny while retaining some believable dramatic elements (Superbad, Ferris Bueller’s Day Off, 40-Year-Old Virgin), but when you go for a completely absurd film and then try to shoehorn in dramatic elements it almost never works—and I’m only saying “almost,” because there may be ONE example out there of it working. So, Mike and Dave falls into this last category and it hurts the film. At times, it feels like Efron and Kendrick are in a completely different film from Plaza and Devine. Efron and Kendrick have great chemistry together and feel like they’re in a more traditional romantic comedy in certain scenes, while Plaza and Devine are in the crazy/absurd movie. The two don’t mesh very well, though the leads do have good chemistry together. I think the filmmakers had to make a decision on what they wanted this movie to be and they couldn’t come up with anything, so the audience gets a funny, but unfulfilling mess.

The cast is good for what they’re given. Efron is turning into a reliable comedic performer, while Devine brings his manic, man-baby energy from Comedy Central’s Workaholics. Plaza brings her usual great deadpan performance, but it grates when the script needs her to “get real.” Kendrick’s character is the only one who has a real reason to be completely screwed up—her fiancée left her at the altar—and she plays the dopey Alice very well. That’s also because Anna Kendrick is a gifted performer and can do pretty much anything she wants—Hollywood, more Anna Kendrick, please, but no more Pitch Perfect films. I liked Sugar Lyn Beard and Eric Richardson in their roles, but to be totally honest, I wish Richardson had been given more to do. I think I liked him mostly because every time I saw him on screen, I was reminded of his fantastic performances as Richard on HBO’s Veep. Beard also shares a fantastically funny scene with Kumail Nanjiani as a masseur. Alice Wetterlund has some funny scenes as Mike’s rival, Cousin Terry, but at times, it felt like the filmmakers were trying too hard with her.

Overall, like a lot of comedies lately, Mike and Dave Need Wedding Dates can be very funny, but it is far from a good movie. Being that it’s a comedy, the laughs have to outweigh the emotions, but you may walk away thinking, “It was funny, but….”