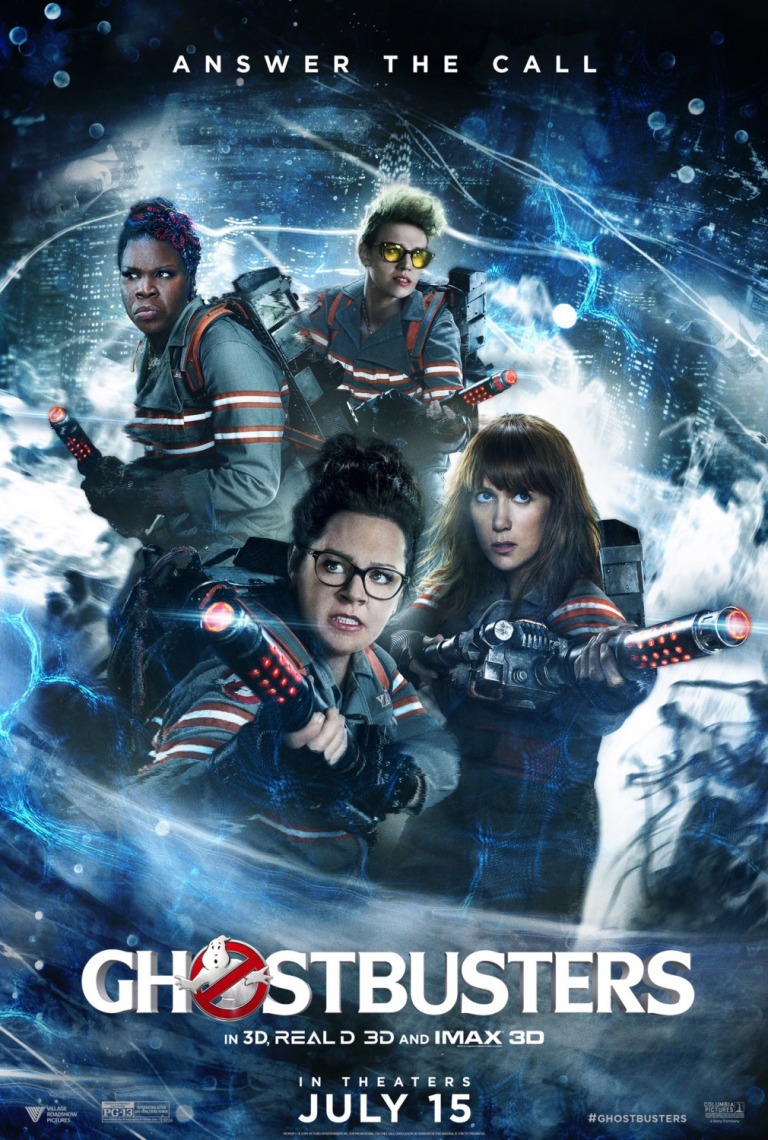 After a blizzard of “controversy” and an ocean of fanboy tears, Director Paul Feig’s Ghostbusters reboot is finally here. The only question that matters is, is it any good?

Erin Gilbert (Kristen Wiig) is a professor at a prestigious university working on attaining tenure. A speed bump arises in a book Erin wrote with her childhood friend, Abby Yates (Melissa McCarthy). The book was about ghosts and is frowned upon by her superiors. So, Erin goes to see Abby to get her to remove the book from online stores, which she is reluctant to do. Abby feels Erin is selling out their beliefs, while she and her colleague, Jillian Holtzmann (Kate McKinnon), are still studying and working with the paranormal. When the three of them encounter an actual ghost, Erin is back on board and the Ghostbusters are born. The team is rounded out when an MTA worker, Patty Tolan (Leslie Jones), joins the group after having her own ghostly encounter in the subway. The final member of the staff is lunkhead Kevin (Chris Hemsworth), the team’s receptionist. While the Ghostbusters do their thing, hotel bellboy/janitor/evil mastermind Rowan (Neil Casey) is setting up devices all over New York City, trying to amplify paranormal energy and unleash a horde of ghosts, because he feels, you know, stepped on by life. So, why not destroy the world? Can the Ghostbusters stop Rowan’s plans while also winning legitimacy from the media and public?

When the trailers first came out for Ghostbusters, no one was really sure what it was. Was it a remake? A sequel? A reboot? Why re-do one of the Top Ten comedies of all time? Well, money, of course, but the problem that comes from making this film is the inevitable comparison to the far superior original, and let’s put this out there right now, the new Ghostbusters is an inferior product.

Now, before anyone gets on me for hating on this film because the cast is female or because the filmmakers are “destroying my childhood,” it must be understood that neither of those reasons are why the film didn’t work for me. Separate from Ghostbusters, I really like the actresses who play them. Also, no matter what the film did, the original still exists, so no worries about ruined childhoods. And let me also be totally clear on this—the film is not a total disaster like I might be making it sound. It definitely has its moments that made me laugh out loud and there were some very cool effects sequences. The best joke is a priceless exchange between Wiig and Andy Garcia, who plays the Mayor of New York.

The problems with Ghostbusters are problems that plague a number of films. The film’s story didn’t work for me at all. It felt like the movie was two different episodes of a television series smashed together. The first part features the formation of the Ghostbusters, while the second is the plot of the movie, which feels almost like an afterthought. In correlation with a plot that feels tacked on, the villain, Rowan, is extremely weak. He’s trying to create a supernatural threat, but beyond the fact that he feels stepped on, he’s barely developed. With his similar tech to the Ghostbusters, I wonder if the filmmakers were going for an “anti-Ghostbuster” thing with Rowan, but it doesn’t come across clearly. Another issue with the story is that there is no real narrative flow to the movie. There are some weird edits and scenes that suffer from what I like to call, “Improv Fail,” where it’s obvious that the cast is improvising and the dialogue is neither funny, nor does it move the story forward. This happens a lot in comedies, but some of the scenes here really stick out. Why do we need multiple scenes of the team testing their gear when one really funny scene would do the trick? It’s overkill and bloats the running time. It also doesn’t help that a lot of the humor is lowest common denominator stuff, which is a shame because these filmmakers are capable of and have done better in the past.

Aside from the weak story, the biggest issue I had with this film is that everyone and everything is cranked up to eleven—including the bit characters. Everyone comes across as, “I’m in Ghostbusters, I need to be wacky and goofy,” when the truth is, they needed to be much more grounded to make the film work. The film is already a stretch because of the supernatural element, so the movie works if the characters are grounded and believable. Take, for instance, Garcia as the mayor and Cecily Strong as his Public Relations Officer. Both these characters smack of, “We’re in a comedy!” The mayor should feel like…a mayor to the audience, while Strong’s performance is way over the top as if she were doing a character on Saturday Night Live. Both needed to be way more subtle to be believable. The issue is, almost all the characters are like this. The whole endeavor is far too cartoony. The original film worked because it felt like these supernatural events were happening in a real world with real characters. Not saying that the characters in the original film are especially deep, but at least they felt like real people and not cartoons.

As I said above, I like all the ladies who were cast as the Ghostbusters, but their performances here are hit and miss. I liked what McKinnon was trying to do as Holtzmann, but she was the most cartoonish character of all—she didn’t feel real at all. Jones has some very funny scenes, as does McCarthy, but both fall back on their standard shtick at times and it feels stale. Wiig is good too, but her character arc kind of peters out as the film goes on. Kind of a bad thing to happen considering she’s the main character. Hemsworth is clearly having fun here, but his character is so stupid, it’s impossible to believe that he’s real at all. And mostly, he’s not funny stupid, he’s just annoying stupid. Then there are the shoehorned cameos. Every living member of the original film—save Rick Moranis, who wisely stayed away—shows up in this film. Some of the cameos (Dan Aykroyd, Ernie Hudson) are better than others. The absolute worst, though, is Bill Murray’s. His character as a ghost debunker is set up as a potential foil for the Ghostbusters and then he’s casually tossed away in a painfully unfunny improvised scene. In fact, there are far too many callbacks to the original film from characters to situations. I felt that the film would have worked so much better if they had truly gone their own way instead of trying to appease fans, while starting something new. It’s a tough balancing act. Also, there were too many winking references to the commotion that blew up around the film. Rowan himself comes across as simply an internet troll, which is why he’s a terrible villain—there’s no depth to internet trolls, so there’s no depth to the character either. So, it’s a real mixed bag.

Overall, Ghostbusters just isn’t a good movie. It is definitely funny in parts, but when you’re trying to relaunch a franchise—because that’s what Sony is clearly doing here—on the back of one of the funniest movies of all time, you really have to bring your A-game and Paul Feig and company didn’t do that. If you really need to see it, wait for home release or just watch the original 1984 classic.