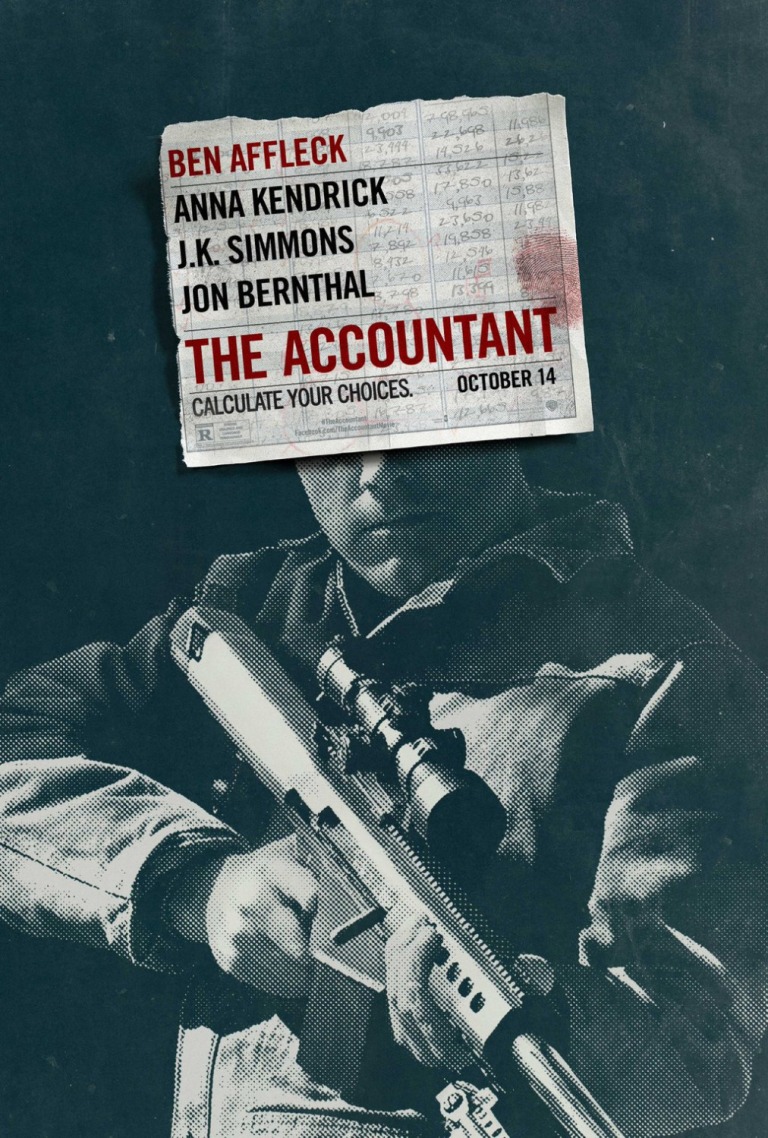 When I saw the trailer for Director Gavin O’Connor’s The Accountant, my immediate thought was, This could either be really good or a complete disaster. So, which is it?

Christian Wolff (Ben Affleck) is a forensic accountant whose clients include some very scary people. He’s also an autistic mathematics savant, which makes the complex math that much easier for him. The U.S. Treasury Department, led by Ray King (J.K. Simmons), is opening an investigation into Wolff, even though they don’t know who he really is, just that he exists. King recruits Marybeth Medina (Cynthia Addai-Robinson) to help in the investigation and they set to figure out the riddle of the Accountant. Meanwhile, Christian takes on a clean client in order to diversify his clientele and make it all a bit more legit. He selects a robotics company founded by Lamar Black (John Lithgow) and agrees to un-cook their books to find a large sum of money that has gone missing over the years. The company assigns Dana Cummings (Anna Kendrick) to assist Christian and once he uncovers the millions of dollars missing, that’s when people start dying.

The Accountant is a taut, highly entertaining action film that only suffers from a plot that is just a bit too overcomplicated for its own good. However, this is not a slam-bang action flick. The Accountant actually has story and a character-driven narrative built around Affleck’s Christian. It’s also clear that the studio—Warner Brothers, in this case—has earmarked this for a potential series, which may be part of the reason why the plot gets overly complicated. Maybe shoehorning the elements to set this up for a franchise hurt the overall narrative? We may never know. It doesn’t hurt the film too much, but it does prevent it from going from really good movie to a great one. It’s definitely a solid film, though, and should be seen. There are quite a few twists and turns that I’m reluctant to give away. Just bear in mind that this film has both action and is a slow burn. The screenplay by Bill Dubuque really takes its time in explaining why Christian is the way he is and why he does the things he does. So, don’t get frustrated if the gunplay doesn’t start until later in the game.

The cast, which is absolutely stacked, does a really nice job here. Affleck is excellent as Christian. He doesn’t overplay the character’s autism and he does a fantastic job of capturing his awkwardness in social situations. He’s also not that bad with the action stuff, but he is, after all, Batman. Kendrick is great as usual and she makes it totally believable that Dana cannot believe what is happening to her. Simmons is also really great here and you will find yourself wondering if he is someone you should be rooting for. Addai-Robinson is a nice foil for Affleck in that he character is just as driven to complete her mission as he is at solving problems. She also plays off of Simmons really well. Robert C. Treveiler is very good as Christian’s father as is Seth Lee as young Christian. There are plenty of flashbacks, so you get to see quite a bit of those two actors. However, the flashbacks are neither tedious nor intrusive. One actor I would have liked to have seen more from is Lithgow, but you can’t always get what you want. He does well with what he’s given. There are some great cameos throughout that I won’t spoil, but Jon Bernthal is another standout as a security expert.

Overall, while The Accountant is a very solid action-thriller, it ties itself up a bit to prevent itself from being a classic. I definitely wouldn’t mind seeing another film in this world. The lead, as played by Affleck, is compelling and fun to watch. Definitely check it out.