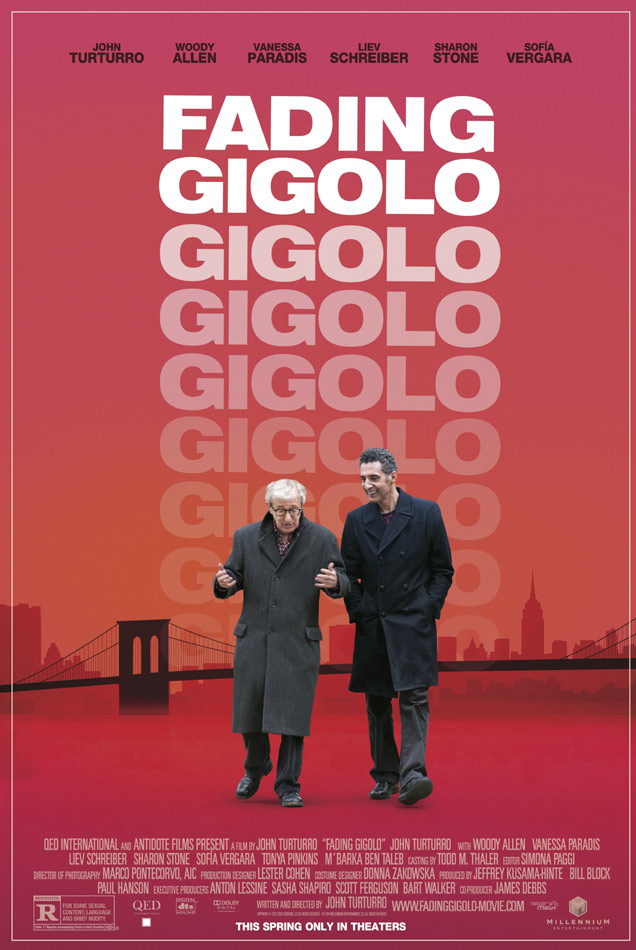 John Turturro writes, directs, and stars in Fading Gigolo, the story of a man and his pimp. But, is there any chance for love for a fading gigolo? Read on to find out.

As a title, Fading Gigolo is a little misleading as it leads the audience to believe that Turturro’s character, Fioravante, has been a gigolo his whole life, but it’s really just something he falls into at the suggestion of his friend, Murray (Woody Allen). Both are strapped for cash and when Murray’s dermatologist, Dr. Parker (Sharon Stone), discusses wanting to have a threesome, Murray offers up Fioravante’s services—all before checking with him, of course. So, the two go into business with Fioravante providing the service and Murray handling the money. However, when Murray comes across a lonely widow, Avigal (Vanessa Paradis), she impacts their business venture in ways they couldn’t anticipate.

Much of the appeal of Fading Gigolo is built on the chemistry and comedic timing between Turturro and Allen. The scenes they have together really pop. There are several hilarious moments throughout the film, but the core story didn’t completely ring true for me. I felt that the relationship between Avigal and Fioravante developed too quickly and too easily, especially for such an orthodox character as Avigal. Also, it’s a running joke that Fioravante is a jack of all trades type of character, but I wasn’t clear on how far into the reality of the story that trait went, particularly in his initial meeting with Avigal where he poses as a masseur. Beyond that, there is a plotline with the Hasidic Jewish community—Avigal’s late husband was a rabbi—that while it had some funny moments, it seemed to exaggerate their power in New York. All these elements made it hard for me to totally buy into the story.

The performances are topnotch. As mentioned above, Turturro and Allen have great comedic chemistry and I’d love to see them work together again. Sharon Stone is great and looks fantastic as Fioravante’s first customer. Sofía Vergara is also great as Stone’s friend Selima, the other piece of the threesome puzzle. Paradis does fine as Avigal, but at times it was tough to tell what was going on in her character’s head, especially towards the end of the film. Liev Schreiber puts in a good turn as a neighbor of Avigal’s who is smitten with her and looks to disrupt her relationship with Fioravante and by extension, Murray.

Overall, Fading Gigolo is a fun film that could have used one more polish on the script or maybe another ten minutes added in. There were moments when I felt like a scene was skipped and it threw me off a bit. In the end, though, the film accomplishes what it set out to do—making people laugh. Audiences should check it out for the great performances alone. Here’s to hoping they will, or at least will seek it out when it comes to cable.