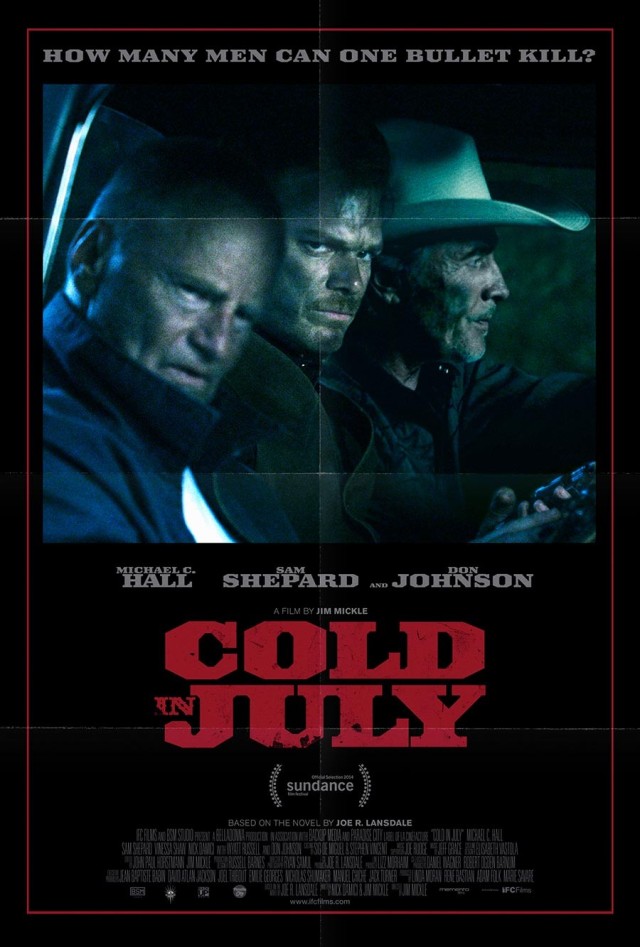 Cold in July is a strange film. On the surface, it is a plain and simple revenge thriller, but there are a couple of twists that definitely throw the viewer for a loop. Unfortunately, these twists also come with an unraveling of the story’s internal logic, ruining what could have been a great movie and undermining some very good performances.

Based on the novel of the same name by Joe R. Lansdale, the film, directed by Jim Mickle, focuses on Richard Dane (Michael C. Hall), a local Texas small business owner who kills a home invader late one night. He is told by the lead detective on the case, Ray (Nick Damici), that the man Richard killed was the son of an ex-con, Ben Russel (Sam Shepard). The film becomes a cat-and-mouse story as Russel delivers veiled threats to Richard and threatens his family. The police finally capture him, but something doesn’t sit well with Richard. He sees a wanted poster for Russel’s son, Freddy (Wyatt Russell) and begins to question if he killed the man the police tell him he killed. He begins to look into the situation and eventually teams with Russel, who has escaped the cops and Russel’s private detective/pig farmer friend, Jim Bob (Don Johnson) to find Russel’s son as well as who it was Richard really killed.

As I mentioned, there are a couple of twists that Mickle throws at the audience, and they are not inherently what derails this film. I can roll with twists, but what ends up happening is that Richard slowly ceases to be the main character in the story and I began to question why he was even there at all. He was always about protecting his family, but then he starts to run off and play vigilante when new twists in the story pop up. That’s a good way to leave your son without a father. Also, it’s never explained why Richard and his family are basically used as bait to lure Russel and we’re never told how far the police corruption goes. Beyond that, the guy that Richard killed at the start of the movie becomes an afterthought. It’s just a poorly put-together script that is more intent on shocking the viewer than it is in telling a good story. It felt like two different episodes of a television crime drama stuck together with the third episode in the middle missing. Richard’s motivation is completely lacking and it makes him a character that the audience can neither understand nor empathize with.

Despite all that, the film is not a total disaster. Hall puts in a decent performance as the in-way-over-his-head Richard, while Shepard is better when he’s menacing Richard’s family, but is decent the rest of the way. Vinessa Shaw is good as Richard’s wife Ann, though she’s underused. The real star of the movie, though, is Johnson as Jim Bob. His character is bigger than life and really makes the second half of the film pop when the audience has no idea what’s going on.

Overall, Cold in July is an entertaining film, but it has a lot of flaws in the script to make it more of a head-scratcher by the end. The first half is really good and tense, but then it goes off the rails and fails to answer important questions that were originally the basis of the film.