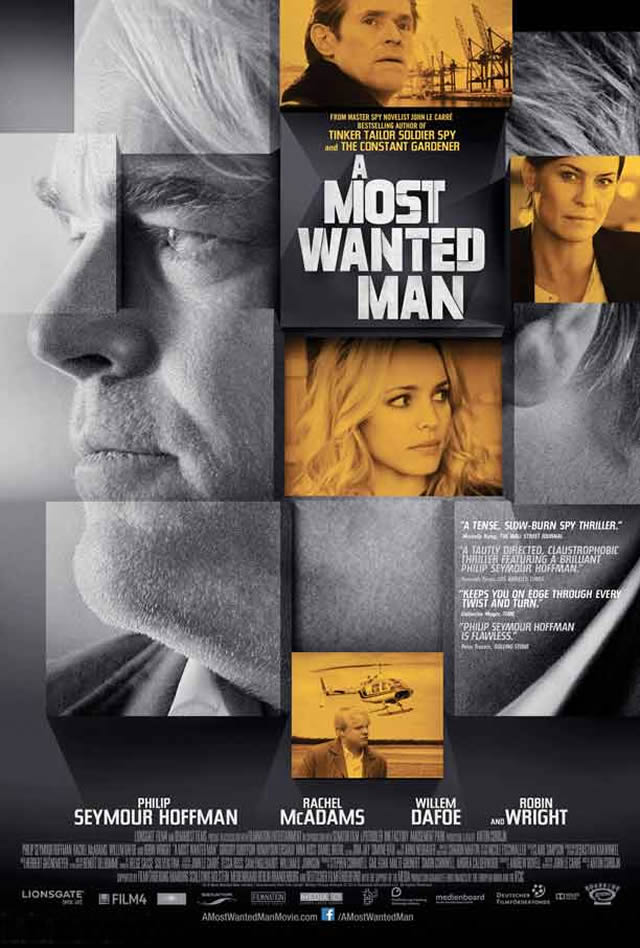 A Most Wanted Man made me angry. Don’t get me wrong, Director Anton Corbijn’s adaptation of John le Carré’s novel of the same name is a fantastic film, but it’s also the final film Philip Seymour Hoffman completed before his death of a drug overdose last year. I’m angry that we won’t see him lead another film.

The story focuses on Günther Bachmann (Hoffman), a German spymaster who runs a team of operatives with the objective of turning potential Islamic enemies into allies so they can use them as intelligence assets to work their way up the chain to bigger threats. Bachmann is on the trail of Dr. Abdullah (Homayoun Ershadi), a philanthropist that Bachmann suspects is funneling money to terrorist organizations. While Bachmann is doing that, a half-Chechen, half-Russian Muslim man, Issa Karpov (Grigoriy Dobrygin), comes across his radar. Karpov is a fugitive seeking to claim his birthright, which brings him into contact with an idealistic lawyer, Annabel Richter (Rachel McAdams) and a banker, Tommy Brue (Willem Dafoe). All of them will collide as Bachmann goes to work, fighting off elements of his own government as well as members of the CIA, represented by Martha Sullivan (Robin Wright).

Much like the last adaptation of a le Carré novel, Tinker Tailor Soldier Spy, A Most Wanted Man is a tightly-wound spy flick that focuses more on espionage than on action-packed theatrics. However, the story of A Most Wanted Man is not nearly as intricate as Tinker Tailor Soldier Spy. That doesn’t mean it’s inferior, it just means that you don’t have to feel like you need to absorb every detail on the screen for fear of being lost down the road. Tinker Tailor is a great film, but it is also very, very dense. Andrew Bovell’s screenplay for A Most Wanted Man is very tight with a lot of wry humor throughout. The script helps Hoffman shine all the brighter. Corbijn’s direction is also on point. He’s come a long way in his evolution from photographer to music video director to feature film director.

The cast is absolutely superb, but this film is Hoffman’s vehicle all the way. Bachmann is a gray character in a world where his allies would like to only see black and white. I don’t know if le Carré has any more Günther Bachmann novels in his backlist, but I know I would have loved to have seen more of Hoffman as the character. All the other actors do fine work here, though I was baffled at times by McAdams’ accent. Daniel Brühl is almost an afterthought as one of Bachmann’s tech guys, which shows just how stacked this cast is. One of my favorites is Nina Hoss as Irna, Bachmann’s right hand woman. Their relationship is a little bit of a mystery, but the tightness of the story’s focus leaves little room to explore it.

If you enjoy slow-burn spy films, A Most Wanted Man is for you. It’s also for you if you enjoy a taut, well-made film with fantastic character work. If anything, you should see it for Hoffman’s great, nuanced performance. It’s one of the best films of the year and it deserves to be seen.