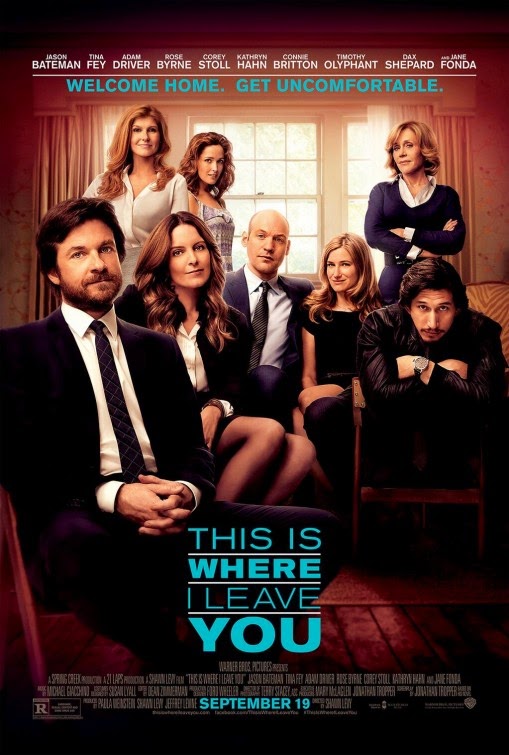 This is Where I Leave You, Director Shawn Levy’s adaptation of Jonathan Tropper’s novel of the same name, is a funny, touching film with a knockout cast. However, a film adaptation might not have been the best way to tell the story.

The film focuses on Judd Altman (Jason Bateman), a radio producer who catches his wife Quinn (Abigail Spencer) cheating with his boss, Wade (Dax Shepard). A few months later, Judd’s father passes away. When he reunites with his family for the funeral, his mother (Jane Fonda) reveals that their father’s final wish was for the family to sit Shiva—a week-long mourning period. Judd’s siblings, older brother Paul (Corey Stoll), sister Wendy (Tina Fey), and younger brother Phillip (Adam Driver), all join him and his mother and all the conflicts and secrets between them come to light.

The drama and comedy work equally well, which makes sense considering the high caliber of the cast. This is a very funny film. The problem, and it’s interesting because Tropper wrote the screenplay as well, is that aside from Judd, all the other characters feel under served by the story. In a film with a great cast and compelling characters, it would have been nice for them to receive equal time. I know that’s not always possible, but my biggest complaint about the film is that the characters don’t receive the same amount of attention. It felt like the story would have been better served being told in a longer format like television, especially with the seven-day mourning period. Also, the problem with the compressed running time of a movie is that some of the scenes where Levy and Tropper try to give the other characters some time feel a little contrived and unnatural. The story definitely should have been given more room to breathe.

The cast is absolutely fantastic and a large part of the film’s quality goes toward the likability of the cast. Bateman is at his exasperated and deadpanned best as Judd and his scenes with the equally great Tina Fey feel like real conversations between real siblings. Adam Driver and Corey Stoll continue the great work they’ve been delivering lately, while Rose Byrne charms as Judd’s childhood friend, Penny. Fonda is good as the matriarch of the family, but I was disappointed at the minimal usage of Timothy Olyphant as Altman neighbor, Horry. His story with Tina Fey suffered the most, I felt.