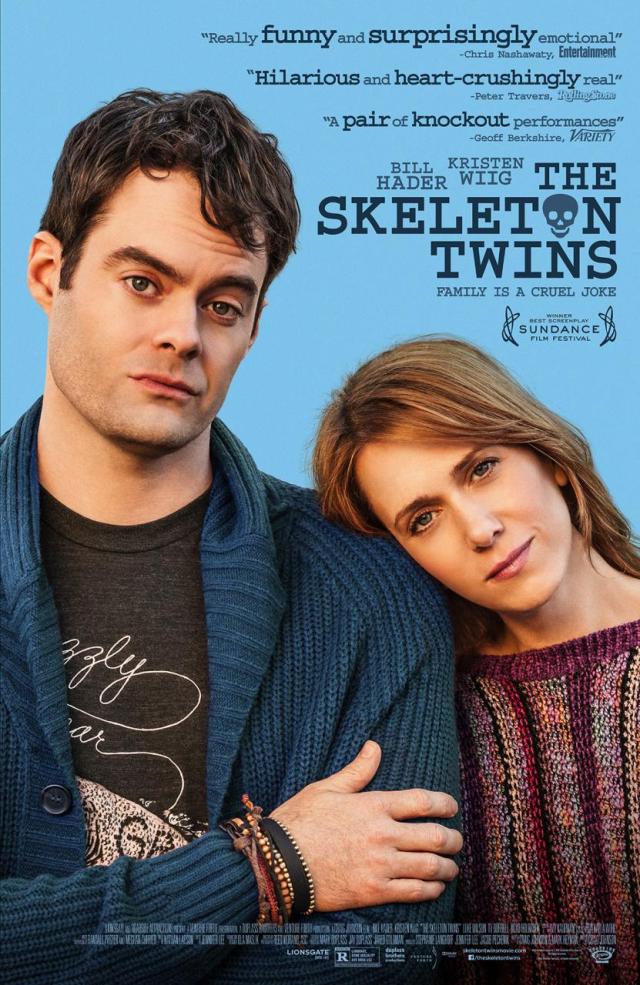 Indie dramedy The Skeleton Twins comes from Director Craig Johnson and stars Bill Hader and Kristen Wiig, who both channel the chemistry they honed on Saturday Night Live to create a funny, touching story of siblings trying to find their way in the world.

The story begins with Milo (Hader) attempting suicide in Los Angeles. Across the country in New York, his sister, Maggie (Wiig), gets the call just as she’s about to swallow a bunch of pills. Yes, this is a real cheery one. Maggie takes Milo in to live with her and her affable husband, Lance (Luke Wilson). The two siblings haven’t spoken in ten years and the story unfolds slowly as they learn more and more about each other in the intervening years. Milo, who’s openly gay, goes to see an old acquaintance, Rich (Ty Burrell), who isn’t totally thrilled to see him, while Maggie deals with an uncertain future in the confines of marital bliss. It’s a character study of these two people as they come to grips with who they really are and how they can help each other heal.

With the unflinching look at suicide, the film can be a little tough to watch at times, but the performances of Hader and Wiig really make the film. Despite its dark and tough subject matter, the film is absolutely hilarious when it needs to be and heartfelt when it calls for that. I was impressed with both Hader and Wiig’s dramatic range. They really sell these characters and make them real people with real problems. Luke Wilson is also great as the good-natured Lance, while Ty Burrell deviates significantly from his role of Phil Dunphy on Modern Family.

I don’t want to tell too much because the joy of the film is unraveling these characters along with the flow of the story. It’s just a very well-made movie that will make you laugh and tug on your heartstrings. If you can find it in your area, definitely check out The Skeleton Twins.