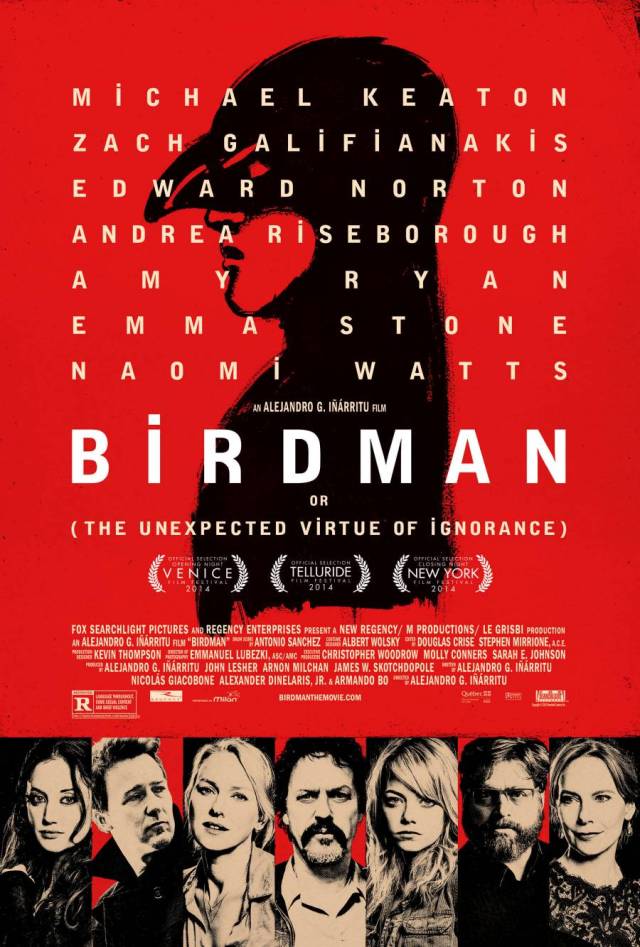 Director Alejandro González Iñárritu’s latest film, Birdman or (The Unexpected Virtue of Ignorance), is a weird, funny, technically inventive picture and a showcase for star, Michael Keaton. However, while the film got a little too weird for me at times, it’s still one of the better films this year.

The film centers on washed up actor Riggan Thomson (Keaton), who is best known for starring in three “Birdman” superhero films before walking away from the fourth. Now, he’s staging a comeback by writing, directing, and starring in a play adaptation of Raymond Carver’s short story What We Talk About When We Talk About Love. The film’s timeline takes place over Riggan’s preview week leading up to opening night. Thanks to an accident, Riggan’s best friend, lawyer, and producer, Jake (Zach Galifianakis), brings in a Broadway star, Mike (Edward Norton), to fill a major role in the play. Of course, the arrogant Mike instantly clashes with Riggan, causing more problems. On top of that, he’s dealing with financial troubles—he’s sunk all his assets into the play—his girlfriend Laura (Andrea Riseborough), who stars in the play, is feeling neglected, and his just out of rehab daughter, Sam (Emma Stone), is teetering on the edge. Oh yeah, and Riggan is also haunted by a voice in his head that has taken on the Birdman persona and berates him every chance it can get.

This film is wickedly funny. It won’t be for everyone, as is usually the case with dark comedies like this, but I laughed a lot at this one. It was also kind of a no-brainer to cast Keaton in this role. The parallels to his time as Batman are very clear, even more so that the Birdman in his head reflects the Batman in the retired Bruce Wayne’s mind in The Dark Knight Returns graphic novel. Also, the film bends reality when Riggan is alone, leaving the audience wondering if he’s going crazy or if his delusions are actually real.

The big focus on Birdman is how Iñárritu filmed it to appear that the entire film is shot in one take. There are no hard scene breaks. At times, the camera will turn away from the action for a soft scene break or time shift, but it’s all continuous. It’s an impressive technical achievement, but I felt these little cheats dulled the impact a little bit. Also, I found the lack of hard scene breaks a little taxing as I watched the film—the audience never really gets a chance to catch its breath. Clearly, that’s what Iñárritu was going for, especially with combining this filming technique with the constant score consisting mainly of drums by Antonio Sanchez. Riggan’s mind is a feverish place, so I admire what Iñárritu did here, but could have used a break here and there. Also, when the action shifts away from Riggan, the single shot technique is stretched a little thin. When it works, though, it’s pretty incredible. Another plus to this approach is that it gives the film a very theatrical feel. I almost felt like I was watching a play within a play instead of a movie at times.

The cast is fantastic here and really powers the production. Keaton is at the top of his game here and gives an amazing performance of a man at the end of his rope. After years of playing supporting parts in bigger movies, it was great to see Keaton in the driver’s seat again. Galifianakis is hilarious as Jake and Norton is really great as Mike. Norton and Keaton have a great adversarial relationship that only deepens as the movie progresses. Naomi Watts is very good as first-time Broadway actress, Lesley. Emma Stone is good in her role as Riggan’s daughter, but I felt her storyline kind of went nowhere. The story is really all about Keaton’s Riggan, though, so everything else is really in service to his narrative.

Overall, I really enjoyed Birdman. It’s definitely a very weird and at times challenging film, but it’s also very funny and features an award-worthy performance from Keaton. If you like dark comedies, check out Birdman if it’s playing near you.