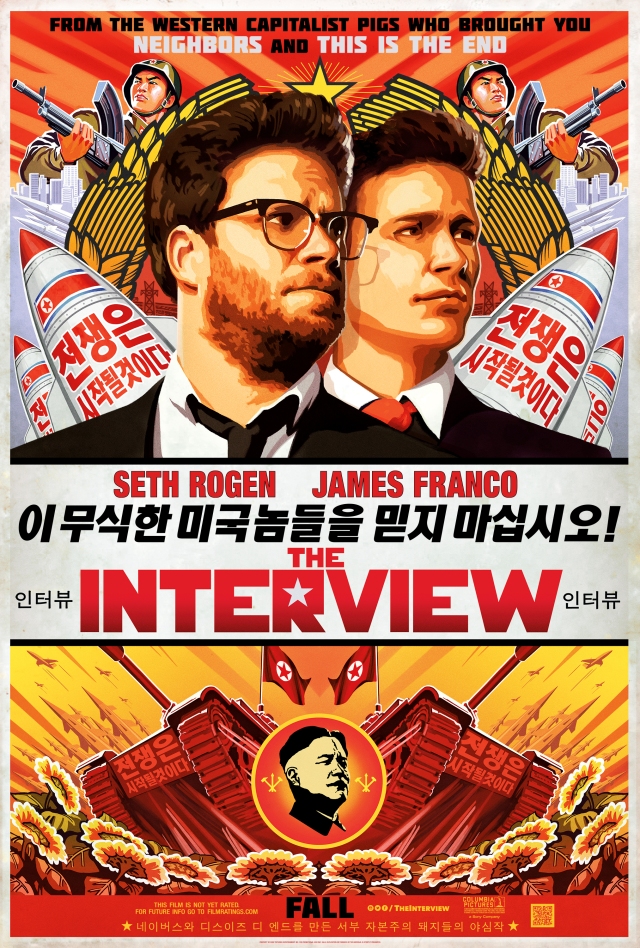 It’s hard to see why there’s such a furor over The Interview. Yes, it’s a story about Americans trying to murder a sitting head of state, but similar to the old adage about trees falling in forests, if the offended population will never see the offending movie, does it really matter?

If you’ve seen the trailer, you know the story of The Interview. Vapid celebrity interviewer Dave Skylark (James Franco) discovers that North Korean leader Kim Jong-un (Randall Park) is a big fan and he convinces his longtime producer, Aaron (Seth Rogen) to set up an interview with the dictator. Aaron has been longing to return to hard news again and he convinces himself that this opportunity is the best of both worlds—though that talking himself into it is very quick and totally unrealistic. Once the interview is secured—under an arduous and quite funny process—the CIA comes calling in the form of Agents Lacey (Lizzy Caplan) and Botwin (Reese Alexander). The Agency wants to use Skylark and Aaron to assassinate Kim, who has finally developed a nuclear missile that can strike the west coast of the United States. Let’s leave out the part that due to the shorter range, the first place North Korea would probably try to hit would be Hawaii—poor Hawaii, everyone forgets you until they need to go on vacation. The boys aren’t given much choice in the matter, but ultimately agree to serve their country. Unfortunately, they are laughably inept in the endeavor.

Beyond the setup, the plot of The Interview is fairly predictable. There are no twists or intrigue in this one. It’s crude and tasteless, but very funny, as we’ve come to expect from Rogen, Franco and Evan Goldberg. It does drag in some spots, but I was never bored. It’s just a stupid comedy that is more about the celebrity-worshipping culture of America than a political satire. Would the people of North Korea be offended by this film? Almost certainly, but as I said in the opening, they’ll never see it because of the strict control their government has on what they are exposed to. That’s why it’s sad why all this kerfuffle has kicked up over it. The film is just okay. It’s very funny in parts, but it’s a typical comedy. It’s not like this was a scathing political commentary—saying Kim Jong-un is a bad guy is not exactly going out on a limb.

The cast does a great job here with what they’re given. Franco is at his arrogant best as Skylark, an interviewer who is beyond imbecilic. Rogen is also good as Aaron, but as it usually the case with Rogen, it feels like he’s been just given his lines right before he steps in front of the camera in some scenes. Caplan is always a welcome addition to any production, but she’s not exactly given a meaty role here. She pops in from time to time and the CIA is predictably inept as they are in many comedies—and some would argue, in real life. Diana Bang is great as Kim’s communications person and object of Aaron’s affections. However, the best of the bunch is Park as Kim Jong-un. He plays him as an unhinged, but dopey guy who is positively star struck by Skylark. His performance is hilarious. There are also several great cameos throughout.

Overall, should you see The Interview? If you’ve liked Rogen and Franco’s previous collaborations, then yes, check it out. Personally, I didn’t find this film half as clever as 2013’s This is the End, but I definitely laughed a lot. Just don’t expect a quick-witted political satire here. It’s more an indictment on American culture than anything else and it does a great job at pointing out the hollowness of Hollywood.

The Interview is available on YouTube, Google Play, and XBox