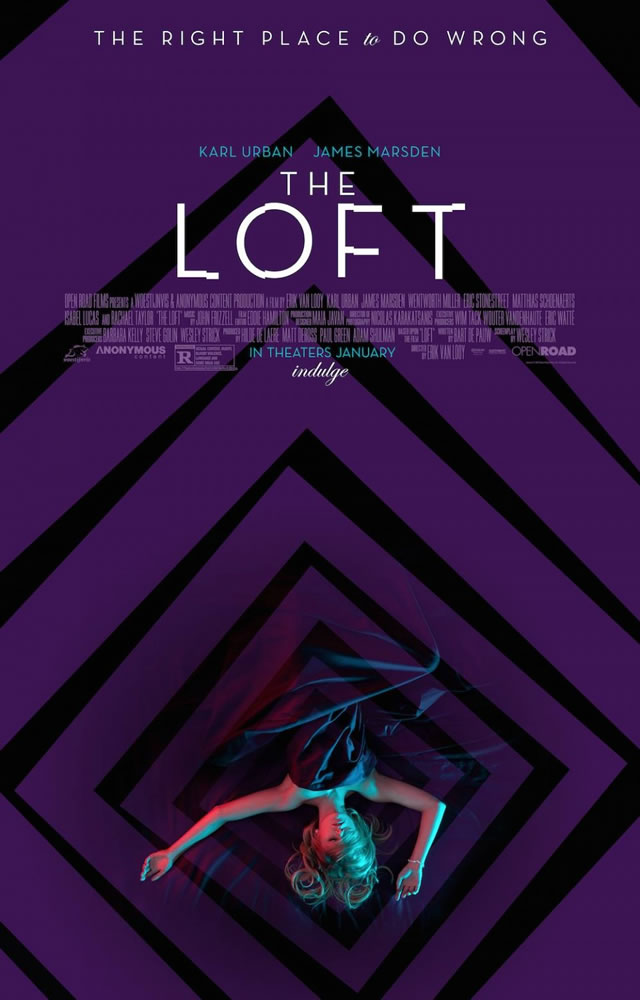 Saw this on a lark. I want my free movie pass back.

The Loft, from Director Erik Van Looy, is a film that could have been good, if it wasn’t so terrible.

Five wealthy married guys decide to share a loft where they can cheat on their wives. The fact that only one of them balks at this idea is a pretty big hurdle in actually liking or caring about these characters. A girl turns up dead in the loft and the scamps need to figure out what happened, since there are only five keys. There are twists upon twists upon twists, but none of them are very compelling. The plot is totally incomprehensible and the characters are wildly inconsistent. Everything is amped up to 11 and way too over the top. It’s hilarious when all the plotlines inexplicably come to a head at the same party. If all the characters had a real reason to be there, fine, but it felt like things just “kind of” happened all at once, solely for expediency’s sake. It’s weak storytelling.

The film is a remake of Van Looy’s Belgian original that was released in 2008. I don’t know how good that one is, but it can’t be much worse than this. The director doesn’t help things with his extreme close-ups of the actors while they’re being interrogated by the police at various points through the story. I know these shots are meant to make the viewer uncomfortable and get into the characters’ heads, but they just come across as amateurish.

The cast is completely slumming it here. Karl Urban must have been thinking, I thought Star Trek would help me! James Marsden looks completely bored, while Matthias Schoenaerts, who plays his brother and reprises his role from the original, plays a slightly compelling psycho and also seems to be popping up in films all over the place now. The quintet is filled out by Wentworth Miller and Eric Stonestreet—traditionally television actors who are probably just happy to be on a film. Miller is gay in real life and it seems that everyone suspects his character of the same—for no reason whatsoever—while Stonestreet plays gay on Modern Family and the filmmakers of The Loft go way out of their way to scream, “HE’S STRAIGHT.” Rhona Mitra also looks like she’s wondering how she ended up in this piece of crap as Marsden’s wife.

I’m not going to waste a lot of time on this one. It’s really bad. There are some unintentionally funny moments throughout, but nowhere near as hilariously bad as The Boy Next Door. The implausible elements just pile up until your eyes are rolling out of your head. And for a movie about five guys cheating on their wives, there’s not even a lot of nudity in this piece of crap! Skip it.