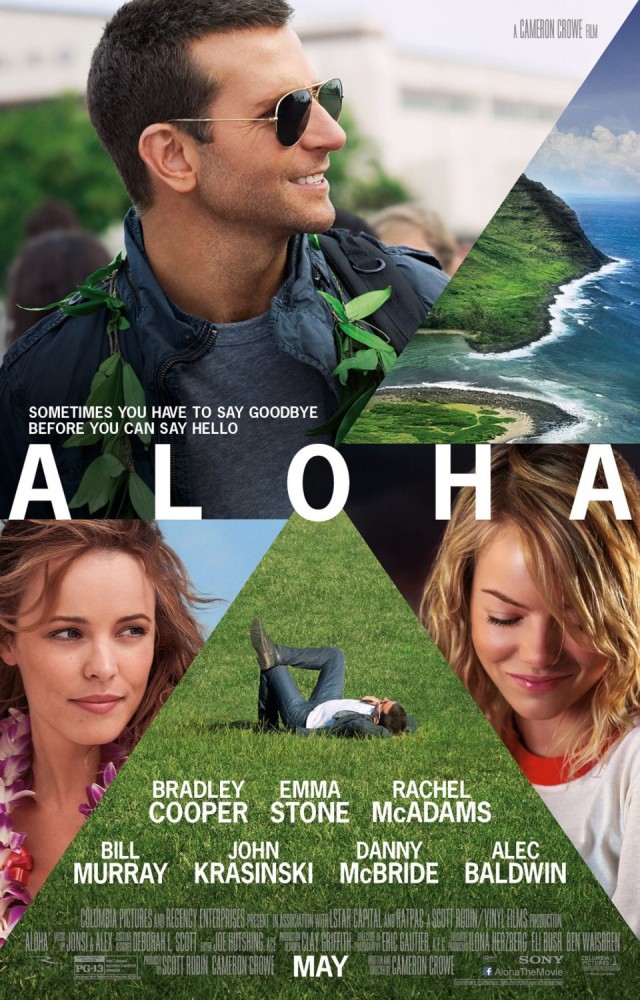 After seeing the trailer for Writer-Director Cameron Crowe’s Aloha, I was really excited to see a really well done adult comedy/drama about a guy trying to restart his life and win back his old flame while taking nuggets of advice from his eccentric boss. It’s too bad that the movie that ended up on the screen is nothing like that.

Now, let’s be clear, I’m not saying that I want a trailer to tell me everything about a film to the point where it can no longer surprise me. What I am saying is, though, Cameron Crowe’s Aloha is the biggest bait and switch I’ve seen since 2013’s Dead Man Down. The only thing that saves this film is the incredible cast that probably received their scripts and then issued a collective, “Huh?”

SPOILERS THROUGHOUT – Like you’re going to see this anyway.

In Aloha, Bradley Cooper does indeed play Brian Gilcrest, a military contractor trying to get his life back together by going back to work for his old boss, Carson Welch (Bill Murray), at his old post in Hawaii. Welch is one of the billionaires involved with privatizing the space program and Gilcrest has been recruited to smooth things over with some locals to complete a land deal. As soon as Gilcrest arrives in Hawaii, the audience is thrown a ton of information. The pilot who brought him in, Woody (John Krasinski), is married to his ex-girlfriend, Tracy (Rachel McAdams). As soon as Tracy sees Gilcrest on the tarmac, she introduces him to her children, Grace (Danielle Rose Russell) and Mitchell (Jaeden Lieberher). Mitchell is instantly drawn to Gilcrest, even though he has his own father, and Grace is a shy twelve-year-old. Oh, did Tracy mention that she hasn’t seen Gilcrest in thirteen years? Yes, she does, immediately after revealing Grace’s age. Try and put that one together, moviegoers. Hold on, though, the tarmac introductions aren’t finished yet! No, Gilcrest is also introduced to his liaison/handler Allison Ng, a woman with an Asian name played by the white as can be, Emma Stone. All of this happens in, literally, about five minutes of screen time at the start of the film, when we’re still trying to sort out Gilcrest’s narrated introduction that sort of explains what he’s doing in Hawaii in the first place. It was a whirlwind of information in a film that definitely had time to spare to make sure its audience was up to speed.

It’s clear from the get-go that Ng is smitten with Gilcrest, as she has read his file and she has a bit of hero worship going on with him. The problem is, the best romantic comedies work when the characters destined to get together start out not liking each other. It doesn’t work as well when one is already in love with the other. Also, this leaves Rachel McAdams’ Tracy in a weird place. There’s kind of a chance that she’ll get back together with Gilcrest, because she and Woody are having problems, but the only real problem the audience gets between them is that Woody, literally, barely speaks. It’s a funny bit, but when your wife is about to walk out on you because you don’t communicate, you’d best damn say something. Of course, the non-drama of whether Grace is Gilcrest’s kid or not hangs over the movie as the most obvious plot twist in a while. So, while McAdams does her best with the choppy script, her character is almost kind of a non-entity as it is established fairly quickly that this story is going to be about Gilcrest and Ng.

Now, if that plot isn’t suitably complicated enough, can I interest you in a rogue nuclear weapon? Wait, what? Yes, it turns out that Gilcrest’s boss is both lovably eccentric and completely sinister. Welch is looking to exploit a loophole in a global treaty and as a private contractor, he plans to put a nuclear weapon in orbit as an extra part of a satellite. This way, he can “protect America.” We also learn some disturbing information about Gilcrest very late in the movie that doesn’t jibe with the sweet romantic comedy we thought we were watching. All of this comes out of nowhere and you feel like you’re watching a completely different film. The problem is, this is the plot that will prove if Gilcrest is the person Ng thinks he is or the selfish asshole that everyone else thinks he is. It’s a severe case of movie whiplash. That’s not to mention that a lot of the other scenes throughout this film, while good, don’t seem to line up correctly to tell a proper story. The script is really all over the place and I had to double check to make sure this wasn’t based on a novel or something and Crowe just couldn’t fit it all into the movie, but no, it’s an original screenplay.

The cast is the only thing that saves this thing from being a complete bomb. Cooper is good as Gilcrest, but when his character is divided by the schizophrenic plot, it’s tough for him to give a truly complete performance. Stone’s character is very strange and she has some nice scenes and good chemistry with Cooper, but overall, her character kind of annoyed me. She seemed quirky just to make her quirky. She’s already a female fighter pilot, maybe work with that first before making her eccentric. Murray kind of phones this one in, probably because he wasn’t sure how to play his character: eccentric billionaire or megalomaniac. In the trailer, he looks like he’s dispensing wisdom to Gilcrest about his romantic life, but at that point in the film, he’s really threatening him—see what I mean about a bait and switch? Krasinski is good as Woody, but since his character really doesn’t speak, we don’t get enough time to learn about him as a person. This also hampers McAdams, since the main drama in her character’s life is her failing marriage. So again, we get some nice scenes with both of them, but none of them really amount to anything. The best part of the film for me was Alec Baldwin’s hotheaded general, but his screen time is so limited, his appearance can only be called a cameo at best.

Overall, Aloha was a huge disappointment. The trailer sold me one movie, but I got two or three completely unrelated ones when I went to the theater. With a cast this stellar, I was so looking forward to this one and it just failed to deliver on every level. It felt like it needed more time to really develop the plot(s), but then again, the thing is such a trainwreck, do we really want to see more? There are some really nice scenes throughout, but nothing to write home about.