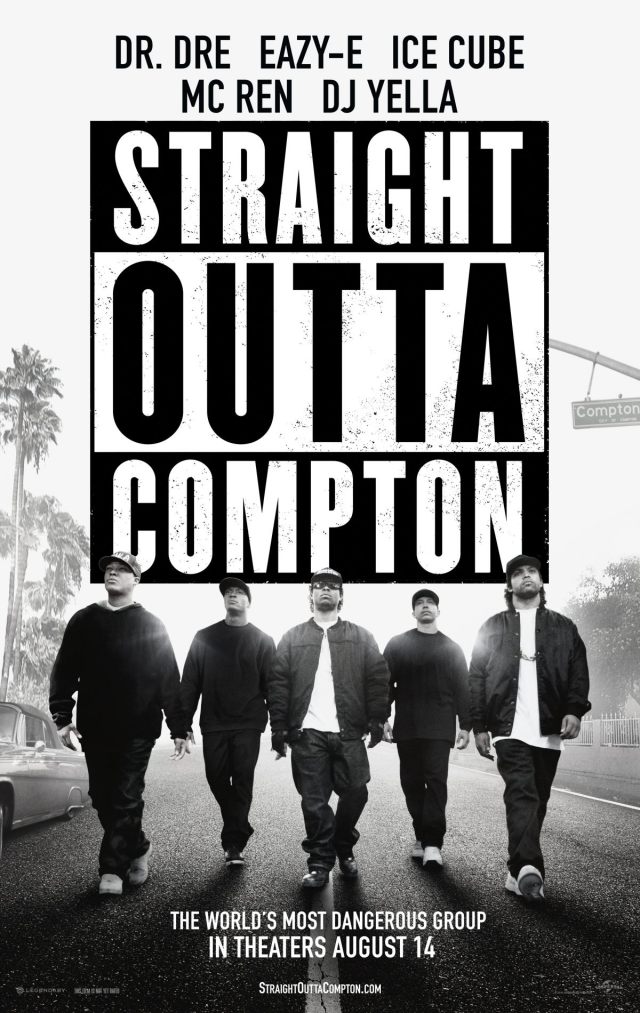 For a music group labeled at one time, “The World’s Most Dangerous Group,” the biopic for legendary rap group N.W.A. plays things surprisingly safe. But, does that make Director F. Gary Gray’s Straight Outta Compton a bad film?

The film documents the rise and fall of the group cited as being the start of the “Gangsta Rap” movement in hip hop, though the members of N.W.A. (Niggaz wit’ Attitude) would frequently call their music “reality rap”—reflective of their lives living in Compton, California. The film tells the story of how Eazy-E (Jason Mitchell), Dr. Dre (Corey Hawkins), Ice Cube (O’Shea Jackson Jr.), DJ Yella (Neil Brown Jr.), and MC Ren (Aldis Hodge) all came together to transform the landscape of music in the late 1980s. It documents Eazy’s criminal past, Dr. Dre’s desire to make something of his life, and Ice Cube’s desire to sling rhymes and be treated as an equal. DJ Yella and MC Ren are painted as just being along for the ride in most cases, but I’m sure that’s not true to life. The whole history of the group is told here from its beginnings on the hard streets of Compton in 1986 all the way through to Dr. Dre and Ice Cube’s current dealings in the worlds of music and film. The bulk of the story, though, focuses on 1986 to 1995. We meet music manager Jerry Heller (Paul Giamatti), who befriends Eazy-E and then attempts to take the group mainstream, and we also meet Suge Knight (R. Marcos Taylor), a sociopath who wanted in on the hip hop game. Another element that plays a crucial role in the development of the group is the Los Angeles Police Department (LAPD) and its never-ending harassment of African-American kids in Compton. However, what eventually tears the group apart is the same old thing: money. Ice Cube was the first to go, suspecting Eazy and Heller weren’t being so forthcoming with his royalties, (they weren’t), especially considering he wrote most of the lyrics of their smash-hit debut album from which the film takes its name. Dre was the next to depart, but he ends up founding Death Row Records with Suge Knight and wonders if he has gone from a bad situation to a worse one. I don’t want to lay out everything that happens, because it would ruin it for the uninitiated, but know that N.W.A.’s story is told effectively with a real emotional punch.

As is usually the case with biopics, much of what happens is simplified to streamline the story. In reading up about N.W.A., I realized that former member Arabian Prince isn’t even mentioned in the film. Also, a confrontation with the LAPD immediately leads to the group’s signature hit, “Fuck tha Police.” It all feels a little too neat in places, but again, that’s typical in biopics, musical ones especially. Though I’m not a rap fan by any means—unless it’s Run DMC or the Fat Boys—I really enjoyed the music in this film. N.W.A. was the kind of old school rap group that I respect and I had no idea what a great lyricist Ice Cube was. As someone who only knew the group by reputation, it was great to actually learn their story—I was shocked at how short their time was together. However, the film isn’t by any means a “warts and all” affair. If you watch Straight Outta Compton and never read about the group again, you’d think that Dr. Dre was a musical saint, but do just the smallest bit of research and you’ll find that he’s been convicted of beating women. Not including it in the film makes the movie as a whole feel a little disingenuous. I guess it pays to be a producer on the film of your life story.

The cast does a fantastic job in bringing the members of N.W.A. to life. Jackson has a leg up on the others being that he’s Ice Cube’s son, but he is the spitting image of his father. Hawkins is very good as Dre, but I always felt that he looked a little too young—Dr. Dre has perpetually looked forty-years-old his entire life. Mitchell is great as Eazy and captures a lot of the film’s emotional core, especially toward the end. Giamatti is very good as Heller, but I think I would have liked a bit from his point of view considering he comes to the group as a friend and leaves as a villain—it all felt a little one-sided. Another great performance, though it is brief, is Keith Stanfield’s dead-on take on Snoop Dogg later in the film.

Overall, while it may sugarcoat some of the more unflattering aspects of N.W.A.’s story and sanctifies its subjects to a degree, Straight Outta Compton is well worth your time. Definitely check it out.