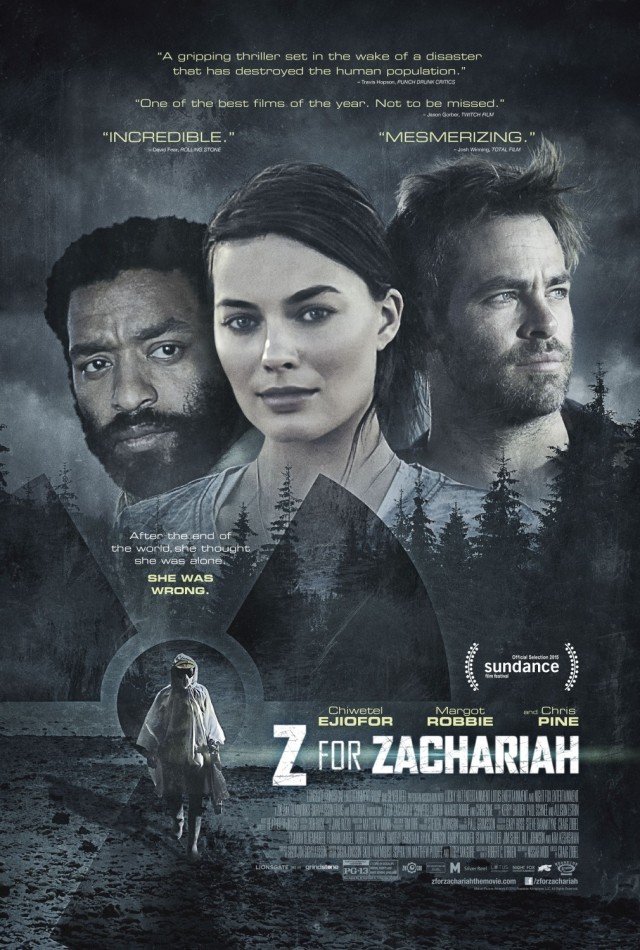 Adapted from the novel of the same name, Z for Zachariah wraps up the summer movie season not with a bang, but with a very slow burn in one of the most tension-filled films of the year.

Set in an undetermined year, Ann (Margot Robbie) lives alone in an idyllic mountain valley in the wake of a nuclear holocaust. Somehow, her piece of land has remained unaffected by the fallout of the war. As far as she’s concerned, she’s the last person on Earth. That is until she comes across Loomis (Chiwetel Ejiofor), a scientist who has wandered into her area. She encounters Loomis while hunting one morning and she spies him in a modified radiation suit and lugging a large closed wagon of supplies and such. When Loomis reads no radiation in the valley with his Geiger counter, he immediately strips off his suit and howls in triumph. He then goes for a swim…in a lake fed by a waterfall that is sourced outside of the valley. Ann gets him out of the water and takes him into her home, helping him get over the effects of radiation poisoning. As Loomis heals, he and Ann develop a tenuous relationship as they get to know each other and feel each other out. All that changes though when another man, Caleb (Chris Pine), appears. Ann is ready to help this newcomer as readily as she was to help Loomis, but he is far more cautious, not ready to trust another with his and Ann’s paradise.

That’s all I’ll reveal of the plot, since the real thrill of this film is watching how these three people interact and the sparks that fly between them. And if you’ve read the Robert C. O’Brien novel that the movie is adapted from, don’t be so sure you know how it’s going to turn out—the Caleb character was created especially for the film. I will say, though, that once Caleb arrives on the scene, the tension is thick from then on. I was on the edge of my seat for much of the film, as you’re never completely sure about Caleb or Loomis and what they mean for Ann. There is a lot of religious allegory that doesn’t feel too heavy-handed as you get sucked into this strange situation with these people. Ann is very small town with her unfettered optimism and naiveté and Loomis is a bit more erudite and worldly, while Caleb is a little bit of both. The combination of personalities makes for interesting drama as these people try to negotiate life after the end of the world. I did think that Ann might have been a little too naïve, but they never really tell us how old she is. Also, she is deeply religious—something that plays into the plot of the film as well—so it would make sense that a good Christian girl would think the best of all people. The ending is also left very open-ended, which was frustrating to a degree, but it also ends up being the whole point of the film—how far would you go to keep Eden alive?

The three actors do a great job with this material. Ejiofor is always fantastic, but Pine and Robbie surprised me a bit. I’ve only seen Robbie in two films—she was very good in both—but Z for Zachariah shows her on the complete opposite end of the spectrum from her roles in Wolf of Wall Street and Focus. Pine also shows great range here. I’m really only used to seeing him in action fare, so his measured performance here was a delight. Also, kudos to Director Craig Zobel and Screenwriter Nissar Modi. They did a great job crafting the story at a deliberate pace, but I would have liked just a little indication of how much time had passed through the story—we’re never really given a definitive passage.

Overall, Z for Zachariah is a film that you should seek out. It was released in limited release this weekend, but is also available on iTunes and Video on Demand. Definitely check out this gem, but if you’re not a fan of slow burn stories, you might get frustrated with the pace.