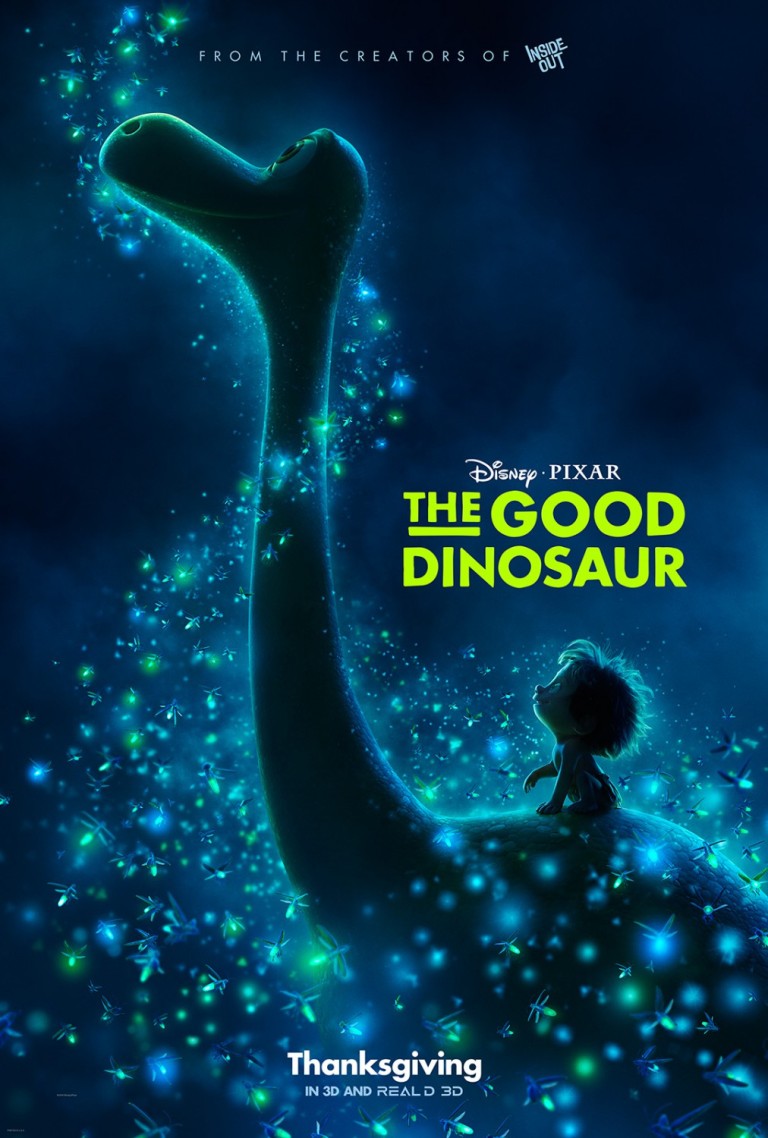 With The Good Dinosaur, we’ve finally found out what Pixar can’t do: release two great films in one year.

The Good Dinosaur, from Director Peter Sohn, posits the question: What if the asteroid that wiped out the dinosaurs never hit the Earth? Set millions of years after that fateful non-event, the film shows a world where dinosaurs are still the dominant creatures on the planet, but they have evolved to performing very human tasks like farming and herding cattle. The story focuses on a young Apatosaurus named Arlo (Raymond Ochoa), who doesn’t quite fit into his family. He’s not the strongest dinosaur out there and farm living is not easy. He’s also very fearful of pretty much anything and anyone. Poppa (Jeffrey Wright) preaches patience, knowing that Arlo will find his place and “make his mark”—quite literally—someday. However, Arlo is not coming along as quickly as his brother and sister, Buck and Libby, so Poppa gives him a job: capture and kill the critter that is getting into the family’s corn silo and eating their stores. The critter turns out to be a human boy, Spot (Jack Bright). Of course, Arlo’s gentle and fearful nature will not allow him to carry out his father’s wishes, so Poppa takes him out in a storm to track Spot down, an expedition that ends tragically. Later, Arlo sees Spot again and chases him down, eventually getting swept away by the river. Now, lost and alone, Arlo must overcome his fears to face the dangers of the world and find his way back home to his Momma (Frances McDormand) and family. Along the way, he’ll meet allies and enemies, and he’ll forge an unlikely friendship with the person who got him into his predicament in the first place: Spot.

The Good Dinosaur is an extremely cute film, but it is not of the quality of Pixar’s best like this past summer’s Inside Out. The script just isn’t good enough. The film famously had some behind the scenes difficulties—it was supposed to be released last year—and I think that comes through in the final product. The script felt like it was “dumbed down” for kids, but if Pixar has proven anything in the past, it’s that they never have to dumb anything down. Pixar films are at their best when they entertain kids, but also have themes and humor that resonate with adults and there’s really none of the latter here in The Good Dinosaur. Also, the script was a little too “on the nose” in that there was no subtlety at all. When I say that Arlo needs to “make his mark,” he literally needs to make his mark—a muddy footprint—on the family silo. The lack of subtlety fades as the film progresses, but it rankled me at the start. I’d expect that from any other animation studio, but not Pixar.

The animation, on the other hand, is absolutely gorgeous. The backgrounds and environments look almost photo-realistic, but that makes the highly stylized dinosaurs look even more out of place, unfortunately. I liked most of the dinosaurs, though. The pterodactyls led by Thunderclap (Steve Zahn) serve as the main antagonists on Arlo’s journey, though the main problem Arlo needs to conquer is his fear. He also meets a comical Styracosaurus named Forrest Woodbush (Peter Sohn) as well as a trio of Tyrannosaur cowboys that help him along the way. The relationship between Arlo and Spot is similar to that between a boy and his dog, but with the roles reversed in this film. They make a great pair and they provide the emotional thrust of the film, but everything else is so lightweight it loses its impact.

The voice cast is fine here, but it’s important to mention that one of the things that changed in the course of the behind the scenes troubles was that the majority, if not all, of the original cast was scuttled and recast very late in the game. I’m almost wondering if it was a mistake to have two child performers carry the weight of this film in Ochoa and Bright. Pixar could have easily gotten some more seasoned adult voice actors to carry the load. I know they like to cast kids as kids, but look at The Simpsons—adults have been voicing children on that show for over 25 years. My favorite characters were the Tyrannosaurs, though. Sam Elliott plays their leader, Butch, while Anna Paquin and A.J. Buckley play Ramsey and Nash. Since the T. Rexes are supposed to be like cowboys, that’s how they’re animated—when they run they look like cowboys riding horses. It’s a nice touch that shows that the dinosaurs have evolved and it adds to the whole western feel of the film.

Overall, The Good Dinosaur is just that—good. It’s not Pixar’s best but it is most certainly not their worst either. I think that the major production problems they ran into just tainted the film. The producers admit that the problems were story problems and that is evident in the final product. Sometimes, a good idea isn’t strong enough to support an entire full-length film and that may have been the case here. Your kids will love it, but you may be wishing you were watching Inside Out instead.