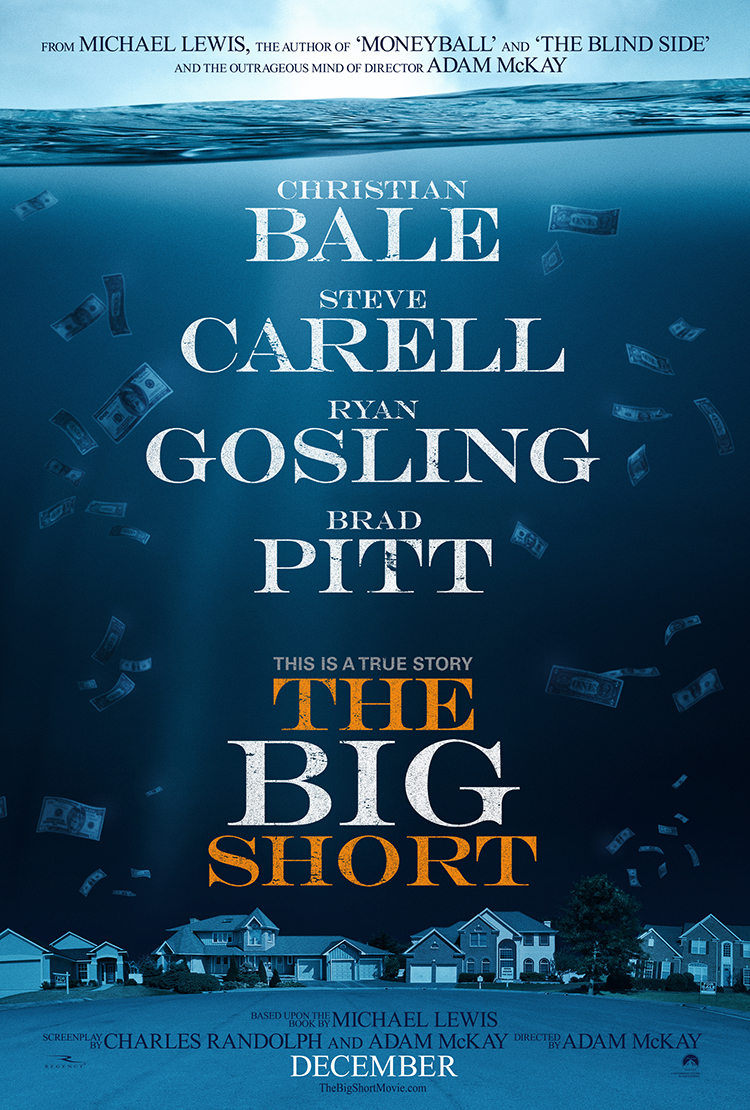 The Subprime Mortgage Crisis was a devastating blow to both America and the world in 2007 through 2009. It wiped out citizens’ financial security and futures and nearly collapsed the world economy. Many countries are still digging out of the rubble of the disaster. Who else to make a film about this subject than the guy who directed Anchorman and Step Brothers?

Based on Michael Lewis’ book of the same name, The Big Short focuses on a handful of financial outsiders who saw the warning signs of ruin and bet against the lousy mortgages that banks were duping their customers into buying. If the collapse came as they all predicted, they would all reap the benefit while millions of Americans would lose their homes and savings. The first to spot a problem all the way back in 2005 was Dr. Michael Burry (Christian Bale), a hedge fund manager with a mind for numbers. He came up with the idea of credit default swaps and put all his fund’s money into betting against the housing market. Banks took his money because they believed, like everyone else, that the housing market was rock solid. Jared Vennett (Ryan Gosling), a Wall Street trader, gets wind of Burry’s plan and goes out in search of partners to get in on the action himself. A wrong number gets him hooked up with a hedge fund run by Mark Baum (Steve Carell), a man so full of righteous indignation, he makes it his mission to make the banks hurt if he can since all they do is rip people off. On the outside of this, two young investors, Charlie Geller (John Magaro) and Jamie Shipley (Finn Wittrock) hear about the credit default swap game, but they need an established player to stake them in the game. This leads them to an old associate of theirs, Ben Rickert (Brad Pitt), a retired banker who has grown disillusioned with the financial industry. They convince Rickert to get involved and they’re off to the races, however, Rickert reminds them of what will happen to others if they are right in their belief that the housing market will crumble. His observation lends a large helping of soberness to a very funny film.

Director and Co-Screenwriter Adam McKay does an excellent job with this adaptation. He has a great way of balancing the dramatic elements with the absurdity of the whole thing. The Big Short is very much a comedy, but it will definitely make you angry by the end. The crime perpetrated by the big banks is unconscionable and they got away with it. It’s infuriating. Luckily, McKay has given us a movie that we can laugh at. He also has a fantastic gimmick for explaining all the complicated financial jargon and rules that created this mess. He brings in various famous people—identities that I will not spoil here—and has them take a time out to explain some arcane financial information or define a term that becomes a lynchpin in the film. It’s a brilliant device and works expertly. McKay has truly proven with The Big Short that he belongs in the big leagues now and not just making “dumb Will Ferrell films.” I put that last bit in quotes because I know how hard comedy is and I find many of Ferrell and McKay’s collaborations to be quite brilliant.

My only issue with the film, though, was that by the end, I was still a little confused on how these guys got rich. Who was buying up all their credit default swaps while the economy was tanking. I was never totally clear on that and I think we needed one more scene of explanation to get that across. I still don’t completely understand what happened with the economic crisis and I think that’s the point of the film: no one knew what the hell was going on, but everyone was making a ton of money, so they just kept piling on until the whole thing collapsed.

The entire cast is absolutely stellar, so much so that the Academy is going to have a tough time deciding who gets nominations. Christian Bale continues his excellent work as Burry. Though it’s not said outright, Burry clearly has some Asperger’s going on with him and Bale captures his eccentricities and brilliance in a fantastic performance. Steve Carell is the passion in this thing. His Mark Baum sums up what all Americans felt after the crisis hit, but he was that way beforehand. He balances being a straight-shooter with some hilarious lines with some good dramatic work as Baum suffered a tragedy that he hasn’t fully dealt with when the events in the film occur. Brad Pitt is very good as Rickert, but he’s more of a supporting player in this one. Rickert is a guy who walked away from the industry and lives off the grid, so the role gives Pitt some fun stuff to play with in his limited screen time. Ryan Gosling continues to impress. He plays Vennett as the typical slimy Wall Street vulture. He also has a lot of the film’s best lines. He’s absolutely hilarious in this film, something he proved in Crazy, Stupid, Love. Be warned, though, you may find yourself squirming a bit in your seat if you start rooting for any of these characters. While they never do anything directly to hurt the American people, they do profit from their pain. These guys aren’t heroes, they just played the game the way Wall Street set it up. The supporting cast also does a great job and includes Marisa Tomei, Jeremy Strong, and Melissa Leo. Just an amazing ensemble collected here.

The short story is that The Big Short is one of the year’s best films. You may not completely understand what happened by film’s end due to the financial arcana involved, but you’ll be thoroughly entertained nonetheless. The cast and McKay do an amazing job of relating the material to the audience. Definitely check this one out while the kids are at Star Wars.