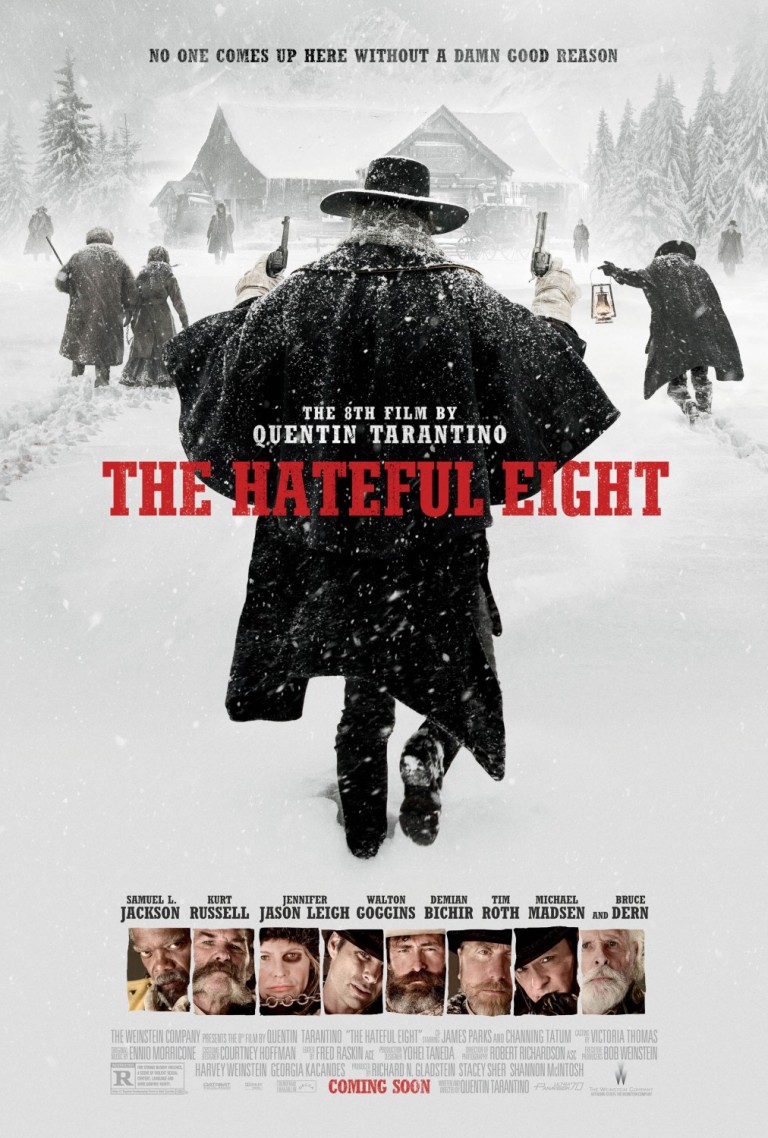 Writer-Director Quentin Tarantino is back with his eighth film, The Hateful Eight, which had a bit of a rocky road to theaters—the script leaked a while back and Tarantino initially vowed not to produce the film due to the leak, but he clearly revised his position. Does this one recall the Tarantino magic, or has the seasoned filmmaker begun to fade?

The story focuses on eight individuals (duh) that find themselves stranded by a blizzard in Wyoming five or six years after the Civil War. Those individuals include John “The Hangman” Ruth (Kurt Russell), a bounty hunter who always brings his bounties in alive; Major Marquis Warren (Samuel L. Jackson), a former slave and Union cavalryman and current bounty hunter who prefers to bring his bounties in dead; Chris Mannix (Walton Goggins), the supposed new sheriff of Red Rock, where Ruth is headed; Oswaldo Mobray (Tim Roth), the hangman of Red Rock; Bob (Demian Bichir), a Mexican watching over the haberdashery where everyone is holed up; General Sandy Smithers (Bruce Dern), a former Confederate general; Joe Gage (Michael Madsen), a rancher on his way home to see his mama, and Daisy Domergue (Jennifer Jason Leigh), Ruth’s bounty that’s worth $10,000 to him. Ruth distrusts everyone around him, thinking at least one of them is in cahoots with Daisy, lying in wait to free her, or looking to collect his bounty. Is Ruth right or just paranoid?

The Hateful Eight plays out a lot like an Old West Reservoir Dogs. There is a lot of great dialogue that reveals the histories of all the characters and it all climaxes with an explosion of violence. While the film is well-written and well-directed, there isn’t a lot new here. Tarantino’s fans will enjoy the film, but it likely won’t win him any new converts. At nearly three hours, the film could have lost a few scenes to tighten up the proceedings a bit. While the dialogue is great, some of the scenes feel like they go on a little too long. Another thing that bothered me about the film was all the casual violence towards women. They beat Daisy up A LOT. Violence never really bothers me in movies, but this was just so nonchalant that it became disconcerting.

The cinematography by Robert Richardson is gorgeous and the score from Ennio Morricone comes across more like a horror score than a western, but it works. There was at least one moment where Tarantino inserted his trademarked anachronistic song into the soundtrack, but it didn’t work for me, considering he wrangled a legendary composer like Morricone to do the score in the first place.

The best thing about The Hateful Eight is its magnificent cast. No one it really a good guy in this film and it allows the actors to have so much fun bringing these characters to life. They are all compelling in their own way. Russell is perfectly gruff as Ruth, while Sam Jackson steals many of his scenes. Jackson’s main monologue is absolutely priceless. Goggins is a definite highlight of the film. He brings a ton of energy to his role and has some hilarious lines. It was also great to see Jennifer Jason Leigh back on screen again. Hopefully this will signal a resurgence for her because she’s really great as Daisy. The rest of the cast is topnotch, but these four were the standouts. If Tarantino knows one thing, it’s how to cast his films.

Overall, The Hateful Eight is definitely a film to see, but it is far from Tarantino’s best. Some of the proceedings have a “been there, done that” feel to them, but that doesn’t mean that the film should be ignored. In most cases, even a just okay Tarantino film is better than most directors’ best—unless it’s called Death Proof. No one wins with that one.