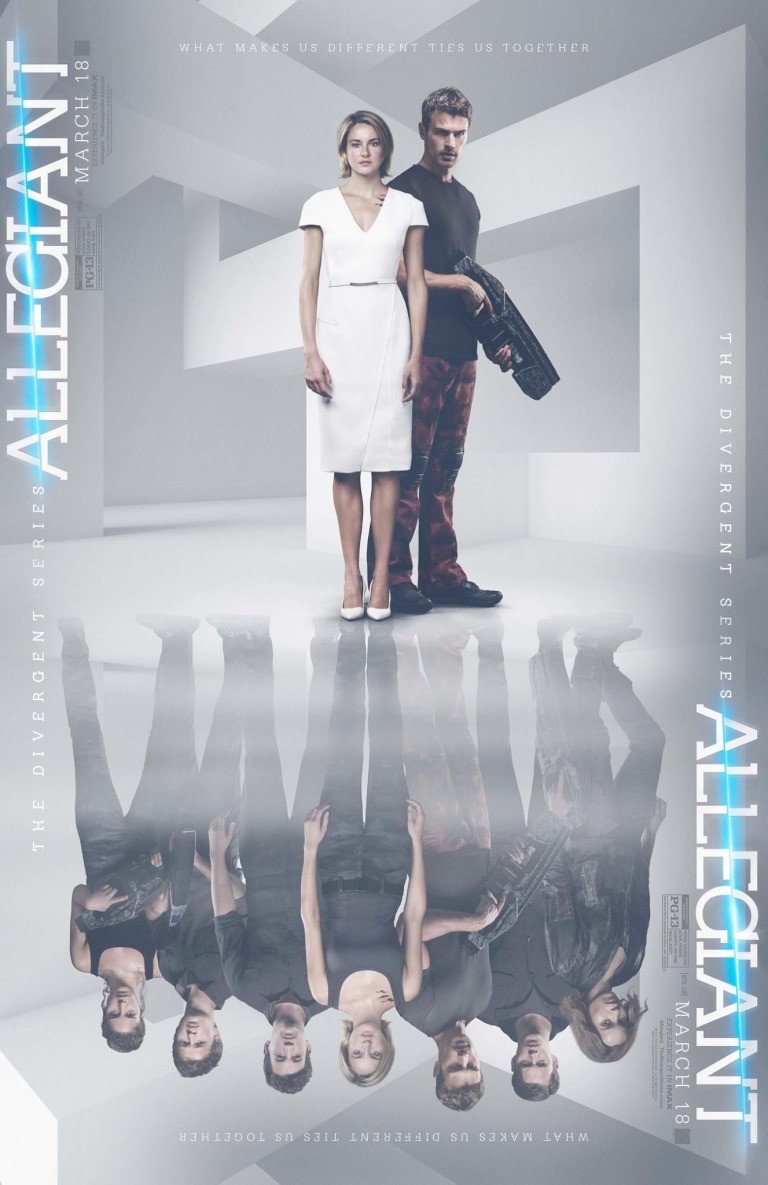 I have to be honest with you. I watch these Divergent films and I wonder how these books are so popular. Allegiant has some interesting sci-fi concepts in it, but it’s everything else that brings the production crashing to the ground.

The story picks up right where the last film, Insurgent, left off. Evelyn (Naomi Watts) and her soldiers have toppled the government and the faction system in Chicago. The people of the city know that there are humans beyond the wall (shocker, I know). However, Evelyn, being paranoid, locks down the wall and begins holding trials for the people who were loyal to Jeanine (Kate Winslet). The sentence is usually death. This puts off Johanna (Octavia Spencer) and her group, which comes to be known as the Allegiant, splits off from Evelyn’s. A civil war is brewing. Meanwhile, Tris (Shailene Woodley) is more curious about what or who is on the other side of the wall. She recruits Four (Theo James), Tori (Maggie Q), and Christina (Zoe Kravitz) to help her get over to the other side. Along the way, they free Caleb (Ansel Elgort) from his imprisonment and Peter (Miles Teller) worms his way into the group. After escaping Chicago and surviving the wasteland that greets them beyond the wall, the group is met by a squad of soldiers with some highly advanced weaponry. They are then transported to a futuristic city in the middle of the wasteland and Tris is taken to see David (Jeff Daniels), the leader of the Bureau of Genetic Welfare. David claims that in the past, humans messed with the genetic code, trying to purify it, which eventually led to nuclear war. Chicago was set up as an experiment by the Bureau to see if they could basically breed a genetically “pure” human. Apparently, Tris is the only one in 200 years. Of course, the city is divided into where “pure” and “damaged” people can go. As Tris works more with David, it drives a wedge between her and Four, who is working with the military. When he joins the soldiers on a run into the wasteland, Four learns a terrible secret about the Bureau and tells Tris he wants them to return to Chicago. Tris resists, saying that David and the Bureau are doing important work. Four is essentially exiled from the city and he returns to Chicago, where Evelyn’s people brand him a traitor. While all that is going on, Caleb has been assigned to monitor what’s going on in Chicago and as the people there near war, Tris decides to lead her group back to where she feels they can do the most good and to save Four.

That sounds like it might be a pretty good movie, no? It’s not. Allegiant is absolutely terrible. As is the trend with these types of Young Adult adaptations these days, Allegiant is only one half of the story of Veronica Roth‘s novel Allegiant, (the other half, Ascendant, will be released next year). The problem is, for a movie that’s supposed to be one half of an adaptation of a single novel, Allegiant really skimps on the details. There are a lot of scenes of people talking and telling you what’s going on instead of showing you. The best parts involve Four, because he actually goes and does things while Tris just sits around looking pretty. It just feels like Director Robert Schwentke wasn’t sure where the focus of this film should have been. Do you stay with Four and tell a more action-packed story or do you stick with Tris and tell a brainier sci-fi tale? I know, let’s half-ass both and make a shitty movie! My experience with these split film adaptations has been that the first film is chock-full of set up for the finale, but Allegiant feels like they tried to make a complete film with only half the story. So, instead of really ending on a cliffhanger like they probably should have, everything gets wrapped up. There is clearly a fight brewing on the horizon, but damned if I can tell you what it’s about. In looking at the synopsis of the novel, I have no idea where the filmmakers go from here. Apparently, some key characters from the novel have been left out of these films, so it’s a complete mystery. The movie is also dreadfully dull. I was bored and the cast looked bored filming the damn thing. Everything was so lifeless. The problem is, there might have been a good sci-fi story in here – if I gave a shit about any of the characters.

The romance between Four and Tris is typical YA pap – a chaste “love affair.” She probably only clings to him because he’s the only interesting character in the whole damn series. I will say, though, it was hilarious to see Shailene Woodley in a car at one point with James, Elgort, and Teller – her three boyfriends from her films for the last few years. The romance between Han Solo and Princess Leia isn’t some hot and heavy sex fest either, but at least in the Star Wars films, you care about those characters, so even a look and a wink has deeper meaning. Here, everyone is just a drone, spouting out dialogue. Teller is the only actor who gets any lines that differ from the boring future speak of the other characters, but the problem is, they are too cliche and on the nose for the “asshole” of the group. You can see Teller knows that his role is garbage as he delivers the lines with zero sincerity. His dialogue was painful to listen to. Don’t even ask me what Zoe Kravitz is doing in this film, when she’s even in it. Her character went from Tris’ best friend to barely onscreen. A complete waste. I love Shailene Woodley as an actress, but the look on her face in this film totally conveys the old Arrested Development trope, “I’ve made a huge mistake.” Like I said, the only character worth giving a damn about here is Four and even Theo James looks like he can’t believe he’s in this one.

I could go on and on about how terrible this film is, but just know that you should avoid it like the plague. I was planning on seeing the rest of these films for completion’s sake, but I’ll probably skip the last film. I just have no investment in these characters. Like I said, there are some interesting ideas here, but I feel like we’ve already been beaten over the head with them in the first two terrible films. As I go to the theater and see all of these YA adaptations, it’s clear that Harry Potter is truly the gold standard. None of these other films has yet to capture the imagination as completely as Harry and his friends. Hunger Games started out strong, but it devolved into garbage to the point where Jennifer Lawrence was much like the actors in Allegiant – bored and not afraid to show it.