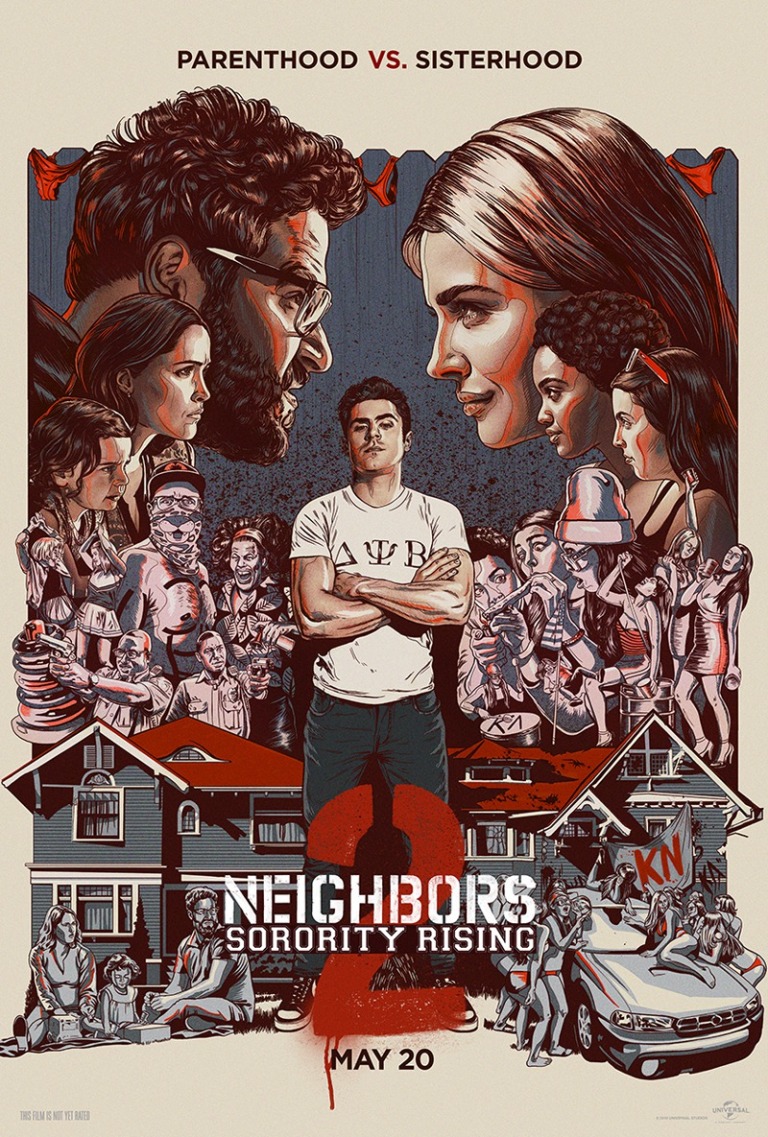 The first Neighbors movie had a lot of laughs with protagonists that were barely likable. Its sequel, Neighbors 2: Sorority Rising is…well, I think I at least like the protagonists better this time around.

Mac (Seth Rogen) and Kelly (Rose Byrne) are ready to move out of their house and into a bigger place far away from potential frat house neighbors. The only wrinkle? Their house is in escrow for thirty days, which for the purposes of this film means that the buyers can pull out at any time for any reason. The reason this is a problem for Mac and Kelly is that a brand new sorority, Kappa Nu, has moved into the old frat house next door. Why is there a new sorority neighbor? Well, Shelby (Chloë Grace Moretz), Beth (Kiersey Clemons), and Nora (Beanie Feldstein) decide to start an independent sorority when they find out they can’t smoke weed wherever the fuck they feel like. Oh, and apparently only fraternities can throw parties, which inevitably become rape factories by the end of the night. Mac and Kelly try to reason with the girls, asking them to just hold off on partying for the length of their escrow, but the girls need their parties to raise money to pay their $5000/month rent. So, like in the first film, Mac and Kelly go to war with the rowdy college kids living next door. However, the sorority has a secret weapon: Teddy (Zac Efron). Teddy’s life has been completely derailed thanks to the events of the last film—well, that and he’s a moron—and he wants revenge as well as a place to live. The sorority can give him both. Who will win in this Clash of the Idiots?

I’m completely baffled by the number of positive reviews I’m seeing for this film. It definitely has some funny scenes, but nothing as good as the first movie. For the majority of the film, the script is a disjointed, unfunny mess. Scenes feel rushed and pasted together. There’s one bit involving mobile phone sabotage that is built up over a couple of scenes, but everything about it is absurd and unrealistic in a film where the biggest obstacle is very reality-based real estate issues. Also, the feminist angle feels tacked on and hollow. It’s a nice message to have women unite and work together against a sexist society, but it kind of falls flat when the inception of the movement is that Shelby can’t toke up at a sorority rush meeting. Would you just light up a cigarette in someone else’s house? No, of course not. Then, why would smoking a joint be okay? It’s completely ridiculous. If the Kappa Nu founding members had just reacted to the rape house—I mean, frat house—I might have been able to get behind them. But, not being able to get high and drunk wherever you want doesn’t mean you’re being oppressed.

The cast does a good enough job with what they’re given, but the script isn’t nearly as good as the last film. Rogen and Byrne went from unlikable characters to annoying. Efron is fine and Teddy is apparently really suffering from the legal ramifications of the last film, but that angle is tossed away with one line and never really explored. Moretz is good as Shelby and I really liked Clemons as well. She was great in Dope and I’m looking forward to seeing more of her. Feldstein shares a funny scene with Ike Barinholtz, but overall, I was disappointed with how he was used in this film considering he was one of the highlights of the first one. He does make a really scary clown, though.

Overall, Neighbors 2 needs to be marked as a disappointment. I’m not sure what I was expecting considering I had such a mixed reaction to the first one, but at least that one was consistently funny. This one has its moments, but is mostly a meandering, muddled, mess. Skip it.