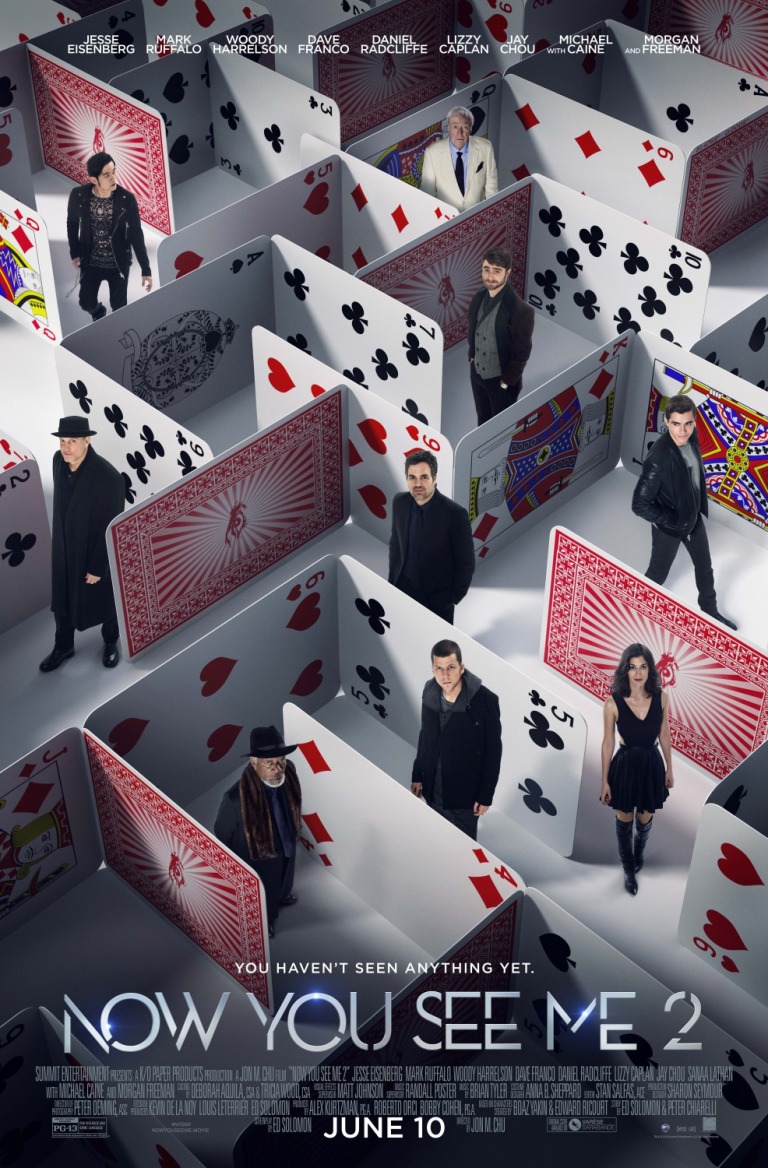 2013’s Now You See Me was a fun little caper movie with likable characters that might have been a nice watch on cable on a rainy afternoon. Its sequel, Now You See Me 2 is none of those things.

I really don’t want to delve into the plot of this film, because the script by Ed Solomon is so completely nonsensical my brain might explode from having to relate the tale, but I’ll give it a shot. A criminal believed dead, Walter Mabry (Daniel Radcliffe) uncovers the Horsemen (Jesse Eisenberg, Woody Harrelson, and Dave Franco), who have been in hiding since the last film, and tells them to steal a super-powerful computer chip or he’ll kill them. The Horsemen—short a member since Isla Fisher wisely sat this one out—have been waiting for instructions from the secret magic organization called the Eye. From watching this film, you’d think that the Eye is essentially the Avengers, but instead of superheroes, they recruit two-bit crooks and sleight-of-hand artists to save the world. If that doesn’t sound completely stupid to you, then you might just like this movie. Meanwhile, the Horsemen’s leader, Dylan Rhodes (Mark Ruffalo)—the guy who apparently joined the FBI sarcastically in the first film, but turned out to be some master magician’s son—tries to find the Horsemen after Walter kidnaps them. He is forced to work with his nemesis, magic debunker Thaddeus Bradley (Morgan Freeman), who goes through such a massive character retcon in this film, that it renders the first film completely worthless. The whole film ends with a citywide magic show in London that has already been ruined by the trailers for this film. Lizzy Caplan replaces Fisher as a new character, Lula, but I couldn’t tell if she was a twelve-year-old in an adult body or just really, really, really excited to be a part of the team. Basically, just take the plot of Ocean’s Twelve and add infinitely less entertaining characters and you have Now You See Me 2.

If you couldn’t tell from my snarky recap of the plot, I really did not like this movie. The whole concept is just so unbelievably stupid it’s impossible to take it seriously on any level whatsoever. Also, because the end of the last movie made zero sense, we’re already on shaky ground from the start. The Eye is a completely ridiculous concept. If those who ran the organization—because it seems like there are, like, three people involved—showed the Horsemen that magic was actually real, that might have been cool and added a nice fantastical element to the film, but no, instead of that, they show that they can plan any situation down to a tee and they know some card tricks. Also, the Horsemen are treated as if they are the most popular rock stars on Earth. NO magician is that popular. Like everything else in this film, it’s completely unbelievable.

Another major problem with the film is that the characters just accept anything any other character says at face value with no analysis whatsoever. Case in point, at a job the Horsemen are pulling at the start of the film, a faceless voice outs Dylan to the FBI and the agents immediately move to arrest him, just on the word of an electronically-altered voice coming out of a video screen. Seriously? The FBI turns on their own agents that quickly? Okay. There are other instances of that throughout the film, but that’s the most egregious one. Let’s also talk about Morgan Freeman’s character. As usual, Freeman does a great job with what he’s given, it’s just that what he’s given is fundamentally ridiculous. To discuss this, though, I’ll have to delve deep into SPOILERS—as if anyone cares.

In the last film, Dylan blamed Thaddeus for his father’s death and he framed him to put him in prison. Now, in this film, it is revealed that not only were Thaddeus and Dylan’s father friends, they were partners in the magic business. Oh, and of course, Thaddeus is the head of the Eye. When Dylan asks Thaddeus, “Why didn’t you tell me?” I half-expected the reply to be, “Well, they hadn’t written this script yet.” It is a 180-degree switch from what Freeman’s character was in the first film that it completely undermines the first film.

There are a few humorous moments in the film, but they are few and far between. The cast gives it their best shot, but they all come up woefully short. It’s not their fault, though, as none of the characters are compelling enough to take an interest in. I complained that when the Horsemen were not featured in the first film, the pace slowed to a crawl. Well, the opposite is true here. The Horsemen are just empty vessels for the crappy dialogue to ooze out of them. They are not beloved as the movie so desperately wants us to believe. Harrelson has an interesting wrinkle in that he plays two characters, but the second is, much like everything else in this film, too over the top to take seriously in any way.

Overall, you have to mark Now You See Me 2 down as a dud. While the first film was a light diversion with an ending that made absolutely no sense, it ruined any potential sequels because the foundation was not sound. If there had been an ounce of creativity involved with the making of this film, the filmmakers could have made an interesting movie, but there isn’t and they didn’t. Skip it.