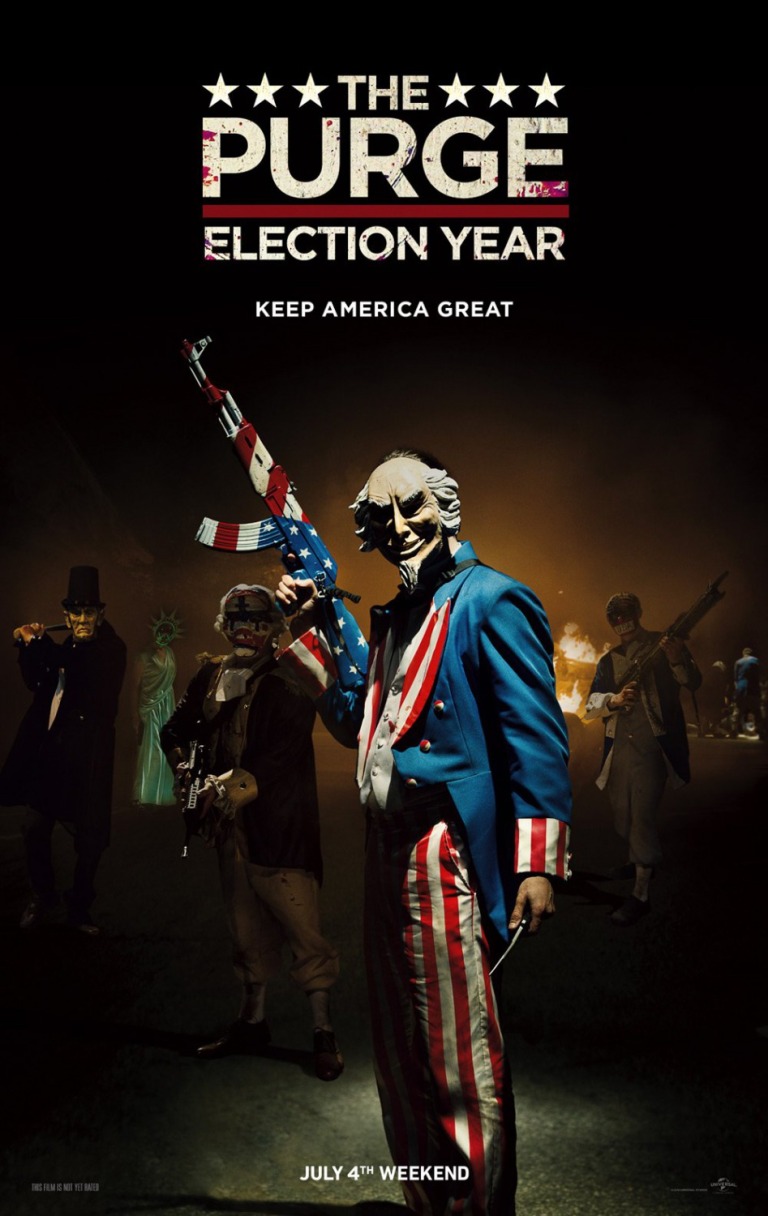 It’s the third Purge movie in four years, but can the Purge: Election Year elevate its game enough to become a movie you won’t be ashamed to like?

Senator Charlie Roan (Elizabeth Mitchell) is running for President of the United States. Her platform? The eradication of the annual “Purge,” which was invented by the party in power, the New Founding Fathers of America (NFFA), to allow Americans one night a year to commit any crime imaginable in order to “Purge” their demons. Oh, and to kill poor people, the Purge was invented to kill poor people. In order to deal with Senator Roan, who lost her family during the Purge several years back, the NFFA decides to lift the protection on high-level government members and they hire a white power militia to kidnap her. Unfortunately for the NFFA, Roan’s head of security is Leo Barnes (Frank Grillo), the former police officer who kicked all kinds of ass in the last film, The Purge: Anarchy. While Barnes and Roan hunker down, deli owner Joe Dixon (Mykelti Williamson) plans to spend Purge night protecting his business when his insurance company raises his rates right before the Purge. At the same time, revolutionary Dante Bishop (Edwin Hodge) is planning to cause some havoc on Purge night. Might all these characters’ paths intertwine? Yes, of course they will.

The Purge: Election Year is by no means a good movie, but it is a fun one and is actually the best Purge film yet. So, it seems that plot-wise, Writer-Director James DeMonaco is getting better. Where he is not improving is the script department. There is zero subtlety in this movie. Characters still recite lines that make the actors saying them look terrible at their craft. Also, a lot of the dialogue is corny and just too on the nose. I can’t even begin to describe just how direct a lot of the dialogue is. It’s like DeMonaco is writing a rated-R film for five-year-olds. So, the script still sucks, but I have to say that this might be the best story we’ve gotten in the Purge series. The topic is very timely, but not just because 2016 is a presidential election year. It’s because the world of The Purge is a nightmare mirror version of ours. The NFFA is nothing but ultra-right wing nut jobs that seems just a nudge away from some of the far-right leaning Tea Partiers already in Congress today. The only difference is that in The Purge, religion and politics have truly merged in the NFFA’s puppet candidate, The Minister (Kyle Secor). The NFFA are definitely despicable, but they’re also way over the top in their villainy. Finally, the concept is still very dopey in that everyone immediately jumps to murder on Purge night. No one seems to have one shred of conscience and the ways people die have gotten ridiculously outlandish. At one point, people are killed with a guillotine in an alley. When the hell did they have time to set that shit up? It’s ridiculous, but we’ve reached the point where Purge movies are so bad, they’re good.

The cast is suitably hammy with the garbage dialogue DeMonaco is feeding them. Mitchell does a good job as Roan, but sometimes she does look lost (no pun intended). Williamson has some funny lines, but some fall flat as stereotypical “black character” lines. A few were downright cringe-inducing. Betty Gabriel has a few really good scenes as Laney, a former Purger-turned paramedic. Anthony Michael Hall lookalike Terry Serpico is also good as the head neo-Nazi. The one problem I had with his character—aside from the racism, of course—is that at the end of the film, he really has no reason to fight Frank Grillo, because his job had been completed and he even told his men, “Let’s go somewhere and wait the night out.” It’s another nod to the unsubtle nature of the screenplay—no one surprises with their actions. What would have happened if Grillo was set to fight Serpico and the latter just walked away? That would have been inspired. Speaking of Grillo, like the last film, this one really belongs to him. I loved Jon Bernthal as the Punisher on Daredevil this season, but if he ever decides to walk away from the role, Grillo is Marvel’s man. I don’t remember him having as much terrible dialogue as the rest of the cast, but it’s probably because he’s just so damn cool. I’d really love to see him breakout some more as an action star.

Overall, The Purge: Election Year is corny and not a good movie in the traditional sense, but it’s a ton of fun at the theater. Of course, if you hate violence in your movies, stay far away. Despite its flaws, I think we have the best Purge film yet, as dubious an honor as that is.