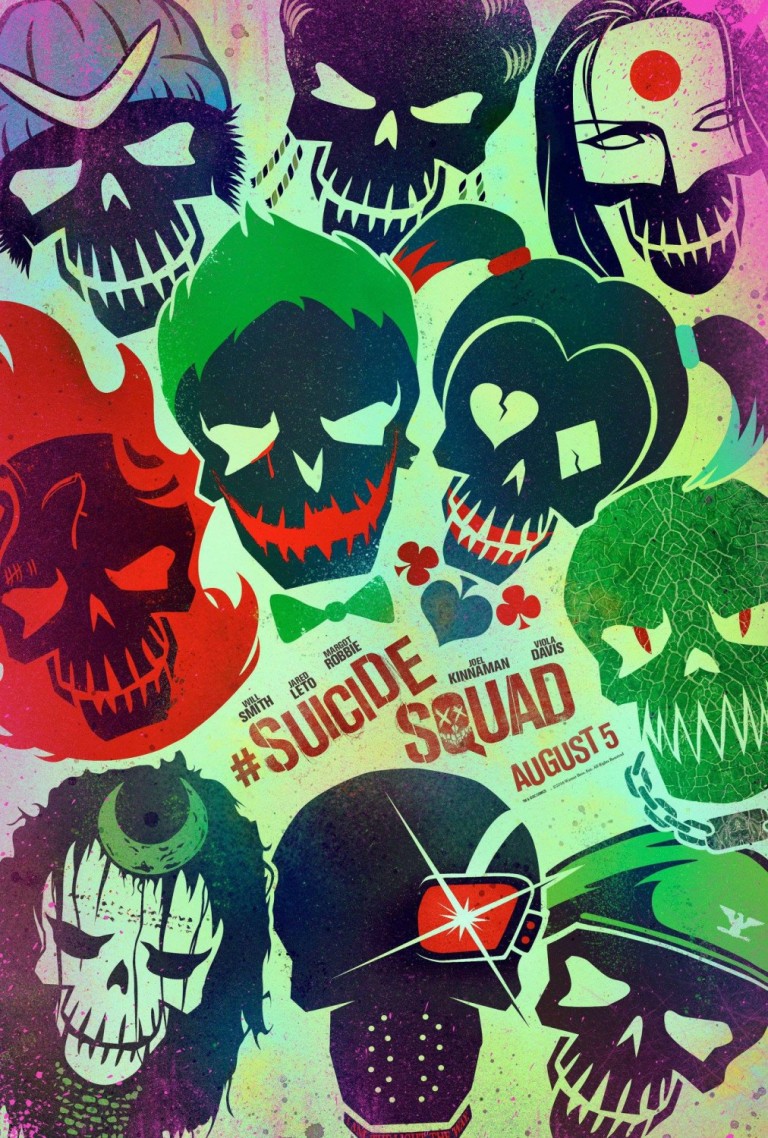 Back in March, Batman v Superman: Dawn of Justice took a beating from critics and while it made a ton of money, it wasn’t quite the runaway hit that Warner Brothers was expecting. All the film’s supporters said, “Well, just wait until Writer-Director David Ayer’s Suicide Squad! That will get the DC Extended Universe on track!” Yeah, about that….

In the wake of Superman, Amanda Waller (Viola Davis) has a plan to transform metahuman criminals into Task Force X, a team that will be beholden to the U.S. Government and stop metahuman threats when they pop up. The villains she recruits include: Deadshot (Will Smith), an expert marksman and assassin; Harley Quinn (Margot Robbie), former psychiatrist and main squeeze of the Joker (Jared Leto); El Diablo (Jay Hernandez), a former gangbanger with pyrokinesis; Captain Boomerang (Jai Courtney), a jewel thief who kills with his razor sharp boomerangs; Killer Croc (Adewale Akinnuoye-Agbaje), a killer with crocodile features and strength; Slipknot (Adam Beach), a guy who can…climb things; and Enchantress (Cara Delevingne), an ancient witch that has possessed the body of an archaeologist. Waller controls the team through two means—the explosive capsule each member has implanted in his or her neck and Rick Flag (Joel Kinnaman), a soldier on Waller’s payroll who holds the trigger to the explosives. Flag’s also sleeping with the Enchantress’ alter ego, June Moone, which makes him more than a little compromised. When the Enchantress escapes and frees her brother Incubus (Alain Chanoine), Task Force X is deployed to bring her down. Meanwhile, the Joker makes a nuisance of himself as he tries to free Harley from her indentured servitude.

The best thing that can be said about Suicide Squad is that it is definitely more fun than Batman v Superman, but that’s about all you can say about it. There are some very good performances here and some elements that would have worked better in a film with a stronger script, but what Warner Brothers has here is an absolute mess. The narrative is completely muddled with flashback after flashback filled with endless exposition prior to finally unleashing the Squad and then…they don’t really do much. The editing is also strange in that there are scenes that cover the same information and there is no natural flow to the narrative—it has been revealed that Warner Brothers had two cuts of the film and they apparently tried to smash them together with Ayer’s “agreement.” Something like that would explain why this film feels so haphazard. It’s amazing to say, but there is really nothing subversive about this movie—a film about supervillains. There is no real edge to it. And therein lays the problem with the concept as a whole. In the comics and other media, the Suicide Squad is an expendable black ops team that the government can dispatch and the government will have complete deniability. What this film is offering is a government superhero team that just spends its off time in prison—a government-sanctioned Justice League of sorts. The threat that the Enchantress presents is way too big for a team in which, really, only one guy has powers. Also, the Enchantress is neither interesting nor well-developed enough to be a compelling villain. The Suicide Squad is supposed to handle more grounded threats, which brings us to the Joker, who should really be the main villain of this film. The only problem is that Ayer and Leto seem to have no idea who the Joker is.

The Joker is supposed to be completely unpredictable and, yes, at times funny. What Ayer and Leto have presented here is just a murderous asshole. Leto’s Joker sounds like Heath Ledger’s crossed with Jack Nicholson’s with some growling thrown in for extra measure. His look is completely ridiculous with all his bling and tattoos, but if he actually did anything good with it, it could be forgiven. Unfortunately, this Joker is all style and no substance. He also has nothing to really do with the story here. He just shows up every now and then and shoots a gun. Ayer either should have made him the main villain—a threat that is more the Suicide Squad’s speed—or gotten rid of him completely. The problem is, if you’re going to have Harley Quinn in your movie, you kind of have to have the Joker in order to properly tell her origin. They get it about half right. Apparently, once you take a bath in toxic chemicals like the Joker, you can do it again whenever you want with no adverse effects, and if you just so happen to make your girlfriend jump in too, all it will do is bleach her skin with seemingly no pain. THE JOKER HAS NO SMILE. Oh wait, yes he does—it’s tattooed on his hand. What the actual fuck? Anyone who was afraid of Leto’s Joker unseating Heath Ledger and Mark Hamill as the greatest Jokers of all-time have nothing to worry about here. Hell, I would have preferred Leto just do a live-action version of Hamill’s Joker from the Animated Series and just call it a day, but no. Just pray to whatever power you pray to that this guy doesn’t end up in Ben Affleck’s upcoming Batman solo film. Then again, who knows? Maybe with a better script, Leto can redeem himself. After all, Ledger had the luxury of having Christopher Nolan as his Writer-Director on The Dark Knight. It’s an odd thing to consider Leto’s terrible performance such a huge problem with this movie when the Joker is barely in it, but one of the biggest selling points of this film was the return of one of the greatest villains in all of fiction and the filmmakers utterly fail in their presentation.

Amazingly, despite the script being a complete mess and Leto’s subpar performance as the Joker, I didn’t completely hate this movie. There is a lot to like here, especially when it comes to the Suicide Squad itself, and there is some really good humor throughout, but the whole endeavor just keeps getting derailed as it goes along. Case in point, seemingly inspired by 2014’s Guardians of the Galaxy, Ayer employs a very prominent pop soundtrack to Suicide Squad, but like everything else in this movie, it is done to overkill. There are some great songs on display here and they are used well…until you hear snippets of about five songs in two minutes. The beginning of the film is literally a pileup of songs that becomes jarring. Speaking of jarring, the CGI on Incubus is utterly horrific, and not in a good way. The character looks so bad, he sticks out like a sore thumb. It looked like the filmmakers pulled Incubus from some late 90s-early 2000s film and thought that people wouldn’t notice just how out of place he looked. It was bizarre and just gave what should have been a slick film a real shoddy look.

Aside from Leto, the rest of the cast does a fairly good job here. Will Smith is very good as Deadshot. His story is the most prominent of all the characters as he tries to redeem himself in the eyes of his daughter. Margot Robbie is great as Harley Quinn in one of the most perfect castings of all time. I wasn’t always sold on how she was written, but Robbie is clearly having fun with the role and that translates through to the audience. A surprise standout is Jay Hernandez as Diablo. Diablo is a villain who has renounced violence, so getting him onboard when the Squad finally goes on their mission is a nice little story within the film. Jai Courtney, whom I usually loathe, wasn’t terrible here and I actually laughed at some of Boomerang’s antics. However, he’s so underdeveloped, he never really has a chance to make a big impact on the film. The same goes for Karen Fukuhara as Flag’s ally, Katana. Katana is a cool character with a sword that steals the souls of those she kills, but she is completely underused here. Even her entrance into the story is ham-fisted and clumsy. Kinnaman does his best as the straight man, but a lot of his line deliveries are beyond flat. I don’t know if Ayer just used some bad takes or what, but Flag just felt “off” a lot. It’s not Cara Delevingne’s fault that Enchantress is woefully underwritten and she’s slinky enough in the role, but she really didn’t do much for me. She should have been more like Bruce Banner trying to keep the Hulk under control, but I never got that from her. I don’t know if that’s a case of her being a model turned not very good actress or if it’s more due to the script. While I liked the Squad—for the most part—for me, the performer who steals the show is Viola Davis as Amanda Waller. Now, the dodgy script reveals her plan to be pretty stupid, but Davis is ruthless in the part. She delivers on everything Amanda Waller should be and I really can’t wait to see more of her in future DC films. For me, she was the best part of the film and she carries most of her performance on just attitude alone. A great example of making the best of a bad situation.

Overall, Suicide Squad just isn’t that good. There are some real standouts in the cast (Smith, Hernandez, Robbie, and Davis), but the weak script and jerky editing doesn’t allow the film to really coalesce into a satisfying whole. I would definitely like to see these characters in a better film, but at this rate, I’m not sure that Warner Brothers has it in them. I’m hoping that Wonder Woman and Justice League right the ship next year, but my optimism just took a major hit.

One last thing and MINOR SPOILER: yes, he is in this movie and stick around after the first round of credits for a bonus scene.