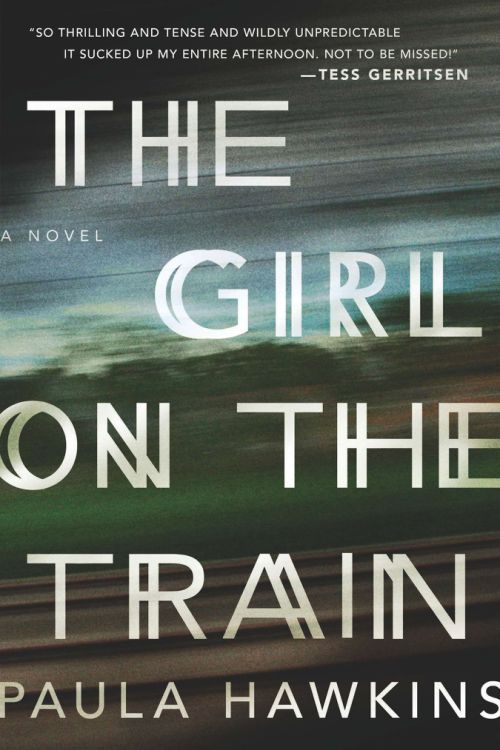 In preparation for the film adaptation being released in October, I decided to read the 2015 bestseller The Girl on the Train from author Paula Hawkins. Is this the next Gone Girl or is it just a weak knockoff?

Set in and around London, the novel is told in first-person from the points of view of three different women. The main character is Rachel, who has hit a bad stretch in her life. Her marriage has ended and she is drinking heavily. She takes the train every day to a job she no longer has, trying to keep up an appearance of normalcy. The train stops near her old neighborhood and she often sees a young couple living several doors down from her ex-husband Tom and his new wife, Anna. Rachel doesn’t know the couple, but enamored with their seemingly idyllic life, she has taken to calling them Jess and Jason. However, one day, Rachel sees something from the train that shatters her fantasy about Jess and Jason. Then Jess, really called Megan, disappears and Jason—Scott in real life—is suspect number one. Worse for Rachel, she has some missing time due to her drinking and she feels like she knows more than she’s remembering. Does she hold the key to Megan’s disappearance? Or worse, was she involved in some way?

Okay, let’s start with the positives. The Girl on the Train is definitely a page-turner. It’s a decent mystery that made me want to see how it all ended, even though I was pretty sure I had it figured out about halfway through. The problem is, most of the mystery comes from the way Hawkins tells the story. First off, there’s way too much telling going on in this book. Everything was told after the fact, which diminishes some of the tension. Now this isn’t simply a case of past tense storytelling, which is traditionally how novels go, it’s more a case of, “This is what happened yesterday.” Each chapter almost reads like journal entries by the characters. It became a repetitive device. Also, as a result of telling the story in first person, from three different points of view, the narration is very selective, artificially deepening the mystery. I’ve read stories with unreliable narrators before—see: Gone Girl—but these narrators are not simply unreliable, though that comes into play as well. Hawkins leaves out key information—names and such—that these characters know in order to keep the guessing game going. It feels like an author purposely withholding information just to maintain the mystery, which is not the same as the character discovering information as she goes. It’s lazy writing, plain and simple. So, while the mystery is decent overall, part of it is manufactured because of the way Hawkins delivers the information.

Now we come to the biggest problem I had with The Girl on the Train: all the main characters are completely detestable. I rooted for exactly no one in this book. While you do feel sorry for her on occasion, Rachel is a pathetic drunk and her antics get more and more exasperating as the story goes on. Characters with flaws are great, but when there’s nothing else really redeeming or interesting about your main character AND you have to spend the majority of the novel in her head, that’s a problem. The other point of view characters—Anna and Megan—are no prizes either. Anna is an insecure, hateful woman, while Megan is not likable at all. The men are no better, though. I’m trying to keep this review as spoiler-free as possible, but trust me when I say you don’t want to spend a lot of time with these characters.

Overall, while The Girl on the Train is a decent page-turner and mystery, Hawkins accomplishes this by not being honest with her audience. It is clearly trying to be the next Gone Girl, but doesn’t come close to being that messed up or good. That novel also had unreliable narrators, but I never felt like the author was intentionally hiding something from me. I have no idea how they’re going to turn this into a movie when much of the mystery early on is concealing someone’s identity by not mentioning that person by name. You can get away with that in a novel, but can’t pull that off nearly as well in a visual medium. If you liked Gone Girl, you may like The Girl on the Train, but it is a far inferior novel.