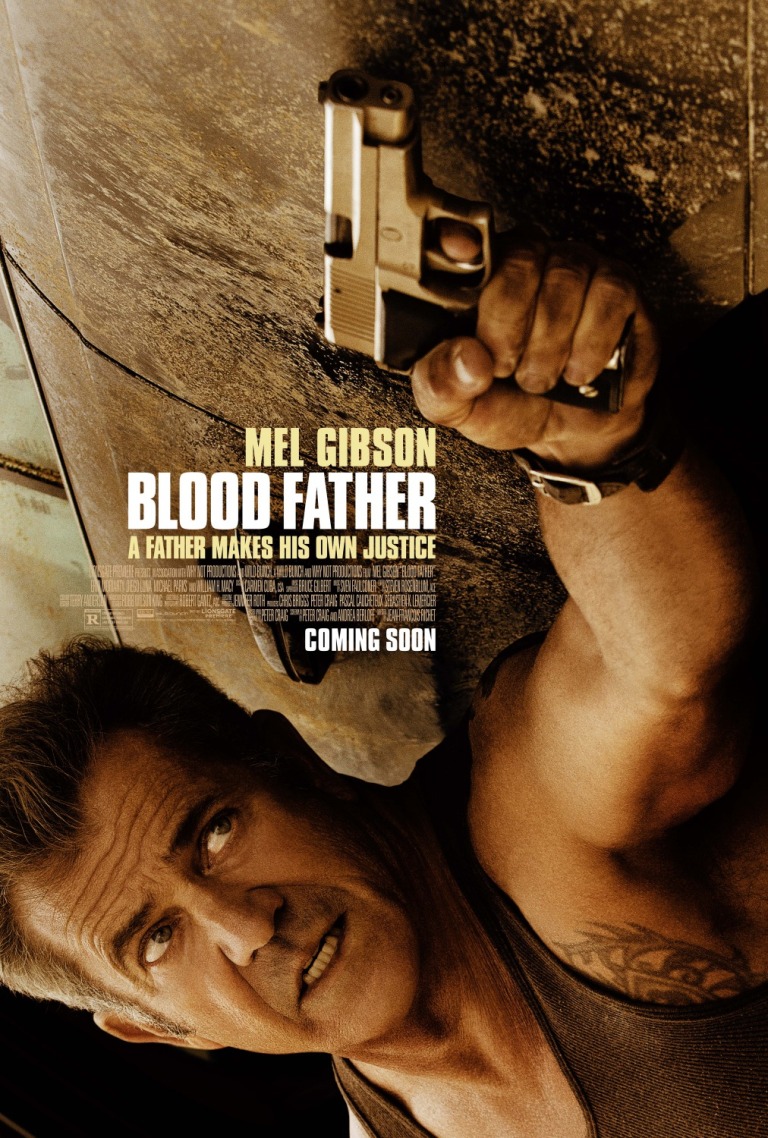 Based on the novel of the same name, Blood Father is a  pulpy chase movie with some nice sequences and and plenty of cringe-worthy dialogue. However, the only question on anyone’s mind is: Is this Mel Gibson‘s comeback?

Set in California, the story centers on Lydia (Erin Moriarty), a strung out seventeen-year-old runaway who is now on the run from her boyfriend’s gang. Her boyfriend, Jonah (Diego Luna), is a drug lord that is looking for people who have cheated him. So, when Lydia witnesses a murder and shoots Jonah, she runs. The person she runs to is her estranged father, John Link (Gibson). Link is a recovering alcoholic living in a desert trailer park as a tattoo artist. His best friend is his sponsor, Kirby (William H. Macy), and he has been searching for any scrap of news about his missing daughter since he got out of prison. Once Lydia crashes back into his life, Link feels himself slipping into his old violent ways in order to protect her. When Jonah’s men come looking for Lydia, they don’t realize what they’ve unleashed. Now Link and Lydia are in a fight for survival and it’s a fight Link intends to win.

Let’s get this out of the way right off the bat, Blood Father is not a good film, but I found it to be a highly entertaining one. There is a lot of nice action here despite the pulpy dialogue, which is laughably bad at times. We’re talking Sin City 2 bad here, folks. The story is very straight forward with very predictable twists and turns, but just as I said at the start, all anyone is really interested in here is how Mel Gibson does in this film.

The answer is, really well. Gibson is able to deliver a lot of the bad dialogue with sincerity and conviction. While the words themselves may draw grimaces, his performance will not. In fact, Gibson’s opening monologue comes across as a real-life apology from the actor about his own struggles with alcohol and the public embarrassment he suffered due to his despicable behavior a few years back. Despite his status as a pariah in Hollywood, that hasn’t diminished his talent as he delivers a really nice performance here. Moriarty, on the other hand, feels woefully miscast as Lydia. She has a lot of trouble with the pulpy dialogue and I never totally bought her performance, which is a problem considering she’s the co-lead. Macy and Luna do fine with their roles and Michael Parks puts in a good appearance as a former associate of Link’s.

Overall, while Blood Father wasn’t a very good film, it was definitely worth a watch. Mel Gibson turns in a good performance as he tries to work his way back from Hollywood Purgatory and the whole endeavor is a nice pulpy crime story. Catch it when it pops up on Netflix or cable, but don’t waste money seeing it in the theater.