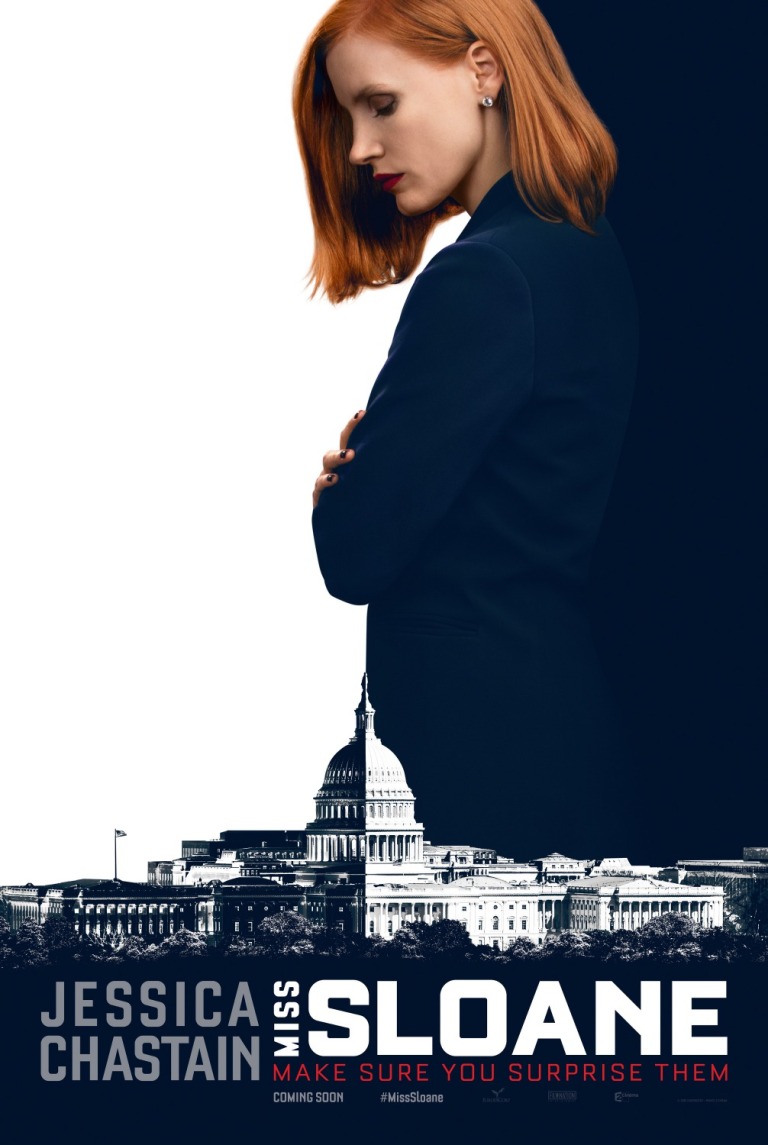 Director John Madden‘s Miss Sloane tackles the lobbying industry in Washington D.C. Is it possible for this movie to be anything but a bore? Luckily, the answer is yes.

Elizabeth Sloane (Jessica Chastain) is a masterful lobbyist in Washington D.C. She is always a step ahead of her opponents and she always plays to win. When her employer looks to work with the gun lobby on an outreach program to women, Miss Sloane balks, opting instead to work for another firm backing the opposition. The new firm is trying to pass a law calling for tighter background checks for firearms. Her former bosses, George Dupont (Sam Waterston) and Pat Connors (Michael Stuhlbarg) vow to destroy her, while her new employer, Rodolfo Schmidt (Mark Strong), has trouble trusting and controlling her. She connects on a personal level with one of her team members, Esme (Gugu Mbatha-Raw), and has her more carnal needs filled by a male escort, Forde (Jake Lacy). As Miss Sloane gets closer to success, her former employers collaborate with Senator Sperling (John Lithgow) to hold congressional hearings to indict Miss Sloane. Will her team succeed in passing the law or will Miss Sloane end up in prison before the race is even over?

Who knew lobbying could be so compelling? Screenwriter Jonathan Perera delivers a suitably twisty plot with a great main character. There’s plenty of tension as Miss Sloane works to outsmart her opponents and root out traitors and such. Watching her keep ahead of her adversaries is highly entertaining and she gets to deliver some great dialogue. However, sometimes she’s a little too prescient. It borders on unbelievable, even though there is a moment or two where she is surprised. Now, let’s talk about the law Miss Sloane is fighting for. The gun issue is a flashpoint for people in this country and I would imagine that a lot of folks won’t like this film because the main character is railing against the gun lobby. However, that’s not what the movie is really about. The movie is about the general corruption that is in Washington and how it perverts our system of democracy. So, if you can leave your hot-button prejudices at the door, you may enjoy a very good movie.

The entire cast does stellar work here, but it is all led by a knockout performance by Jessica Chastain. She commands the screen when she’s on it and her presence is felt when she is not. The best part is that Miss Sloane is an immensely compelling character. When you have a great lead character, it makes the movie all the more enjoyable. Waterston shows a side that I’ve never seen before: ruthless businessman. I’m so used to him playing the righteous Jack McCoy on Law & Order that I was taken aback by his portrayal, but I enjoyed it nonetheless. Stuhlbarg delivers as usual  and Mbatha-Raw gives an emotional performance as a woman whose life has been touched by gun violence. Alison Pill also puts in good work as Sloane’s assistant at her old job, while Lacy adds an interesting element as Sloane’s frequent sexual partner. Just a really great ensemble, but Chastain really carries the film on her shoulders.

Overall, I found Miss Sloane to be a thoroughly entertaining political drama/thriller. Chastain delivers a fantastic performance and portrays a fascinating character. Don’t let this one slip past you in the glut of Fall/Winter films.