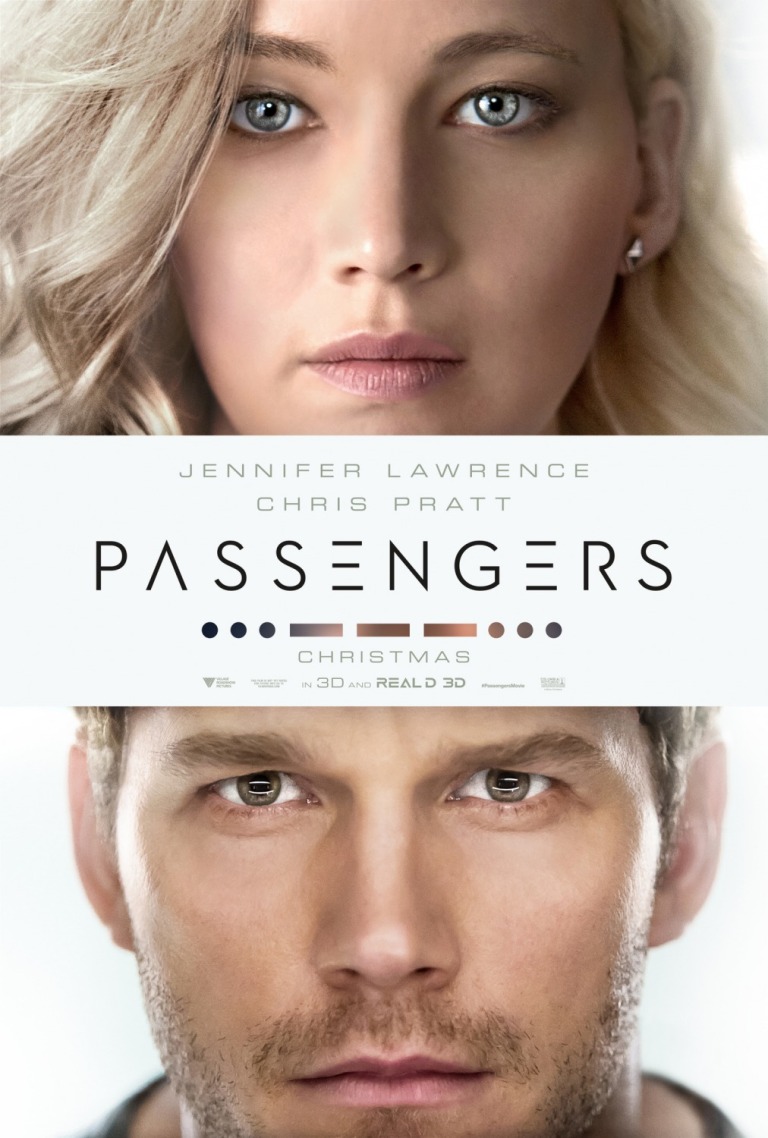 One of the most anticipated films of the year has arrived in Director Morten Tyldum’s science fiction extravaganza, Passengers. Does the film live up to the star power wattage of its two leads or does it die a quiet death in the depths of space?

There will be frequent SPOILERS throughout this review—it’s the only way to discuss it, I’m afraid.

The luxury star liner Avalon is hurtling through the cosmos on a 120-year journey to the colony planet Homestead II. Five thousand passengers and over two hundred-fifty crewmembers are set to make new lives for themselves on the colony. The ship and the colony are controlled by the Homestead Corporation and let’s just say that the company will have a hell of a lawsuit on its hands by the end of all this. About thirty years into the trip, a collision with an uncharted asteroid field causes a disruption in the ship’s operations and one of the hibernation pods opens early, re-animating Jim Preston (Chris Pratt). He is the only human awake on the ship and he’s ninety years early, which means he will die before the ship even completes its journey. His only companion is Arthur (Michael Sheen), the android bartender stationed on the ship. When Jim first visits the bar and Arthur, I got a real Shining vibe, but the film doesn’t go in that direction. No, what they do here is much creepier. Jim lives on the ship for just over a year before he starts contemplating suicide and feeling utterly alone. That’s when he sees Aurora Lane (Jennifer Lawrence) in her pod—yes, they literally called the “sleeping beauty,” Aurora. It’s love at first sight for Jim and thanks to the ship’s lack of anti-stalker laws, he is able to read up and watch interview videos of Aurora from before she went into hibernation. Aurora is a writer and, of course, she’s brilliant and Jim loves everything she’s written. They were made for each other! He wrestles with the decision whether to wake her up or not and finally succumbs to the devil on his shoulder. He wakes Aurora up and plays it off as if the ship malfunctioned again and woke her up—real classy move. By the way, when I say Aurora is a writer, we learn after her awakening that she’s a journalist—apparently not an investigative journalist, though, because she can’t put two and two together to figure out that Jim is responsible for her “accidental” re-animation. The two of them soon fall in love, but nothing lasts forever and as is usually the case in sci-fi films, the robot ruins everything. Arthur, unaware that Aurora is clueless, inadvertently reveals the truth and she reacts as you would expect—not well. She correctly accuses Jim of killing her and she cuts off communication with him. He tries to win her over again or at least explain himself, but she’s not having it. By now, two years have passed and systems on the ship are acting more and more erratic. Is the ship headed for catastrophe? And if so, will Jim and Aurora make amends before a fiery death? Will you even care?

Despite a pair of likable leads, great special effects, and an interesting premise, Passengers has a ton of problems with the primary one being Jim’s decision to awaken Aurora from her hibernation. As Aurora points out later in the film, he has essentially murdered her. There’s no coming back for him as a character from that point. He immediately goes from nice guy to creep and it permanently tarnishes his character. Actually, there’s only one way for Jim to redeem himself, but we’ll get to that in a moment. It surprised me that it took only a year for Jim to resort to condemning one of the female passengers to death. Granted, he had ninety years staring him in the face, but I felt there needed to be a longer period of time for him to have been alone before he made that fateful step. I can understand why Jim did what he did, but it doesn’t excuse it. It also doesn’t help that Screenwriter Jon Spaihts makes him come across as creepy as possible before he finally takes the plunge. The worst part about all this is that because the ship is having so many problems, there’s no reason why another malfunction could have woken Aurora up. Then, the film could have been more interesting. The filmmakers could have had the two of them hate each other to start, but then have them slowly come together—you know, a real love story. The way it is in the final product, you’re just waiting for the other shoe to drop and when it did, I couldn’t help but cackle. Jim should have known how Aurora would have reacted to the truth—she reacts the same way anyone would to finding out she had to spend the rest of her life with a creepy stalker—and knowing that should have given Jim even more pause. It’s just a terrible narrative decision, especially in light of the ending.

The movie’s ending piles one stupid element on top of another, completely ruining an already damaged film. You’ll feel like you’re giving your eyes a workout from how much you’ll be rolling them. So now I’m going to get into MAJOR SPOILERS in order to discuss the completely ridiculous ending to this thing—you’ve been warned. So, Aurora is understandably avoiding Jim when another ship malfunction opens another hibernation pod. This time it is crewmember Gus Mancuso (Laurence Fishburne) that wakes up. With Gus’ elevated access, Jim and Aurora are able to find out that the ship was damaged badly on that first collision before Jim woke up. Gus’ screwy hibernation pod leaves him in dire straits, so it’s up to Jim and Aurora to save the ship. They find that the engine cannot vent heat properly, which will inevitably lead to the ship’s destruction. Jim goes outside the ship—in a spacesuit, of course; it’s not THAT dumb—to open the vent from the outside. Unfortunately, he has to hold it open, but it’s okay, he brought a plastic/metal door from inside the ship to mildly protect him. When you see the fire that shoots out of the ship and engulfs him, you’ll wonder how he lives. Then, he has to deal with his suit getting punctured and his dwindling oxygen supply. By the time Aurora gets to him, he’s been out of air for several minutes. By the time she drags him over to the infirmary to scan him in the AutoDoc, it’s probably been—at best—a half an hour. That means that if the AutoDoc can resuscitate him, he’ll be brain dead at best. Nope! This science stuff is magic and Jim is good as new! Oh, and he and Aurora fall in love again and live happily ever after on board the ship as it cruises to its destination. No. Just…no. First off, the AutoDoc basically negates death altogether, so there’s nothing to say that Jim and Aurora can’t live forever, which destroys the entire conceit of the film. On top of that, the only way this movie could have ended properly is if Jim gave his life to save Aurora and the others. There’s no way this ends in a happy ending. It felt like a contortionist’s act just to get there. What started out as a neat premise is destroyed and left in ruins by the end of the film.

Pratt and Lawrence do the best they can with the material and they have good chemistry, which makes the early going bearable, but there’s just no way to overcome the grossness of the story to completely buy in. Fishburne is good for his short time on screen and Sheen is great as the android. This is Pratt and Lawrence’s show, though, and the script just utterly fails them.

Overall, Passengers may look good and it has two highly likable leads, but the script is not only offensive with its creepy stalker vibe, but in the third act, it just completely falls apart into ludicrousness. It’s clear that the filmmakers and studio had no idea what they wanted this film to be – Titanic in space? Sci-Fi Action-Adventure? Hard Science Fiction with questions on morality? – so, they decided to just smash all their wishes together and it resulted in a huge mess. It’s a shame, because there’s a good movie in here somewhere, but the attempt was completely botched. Catch it on cable if you want, but do not pay to see this one.