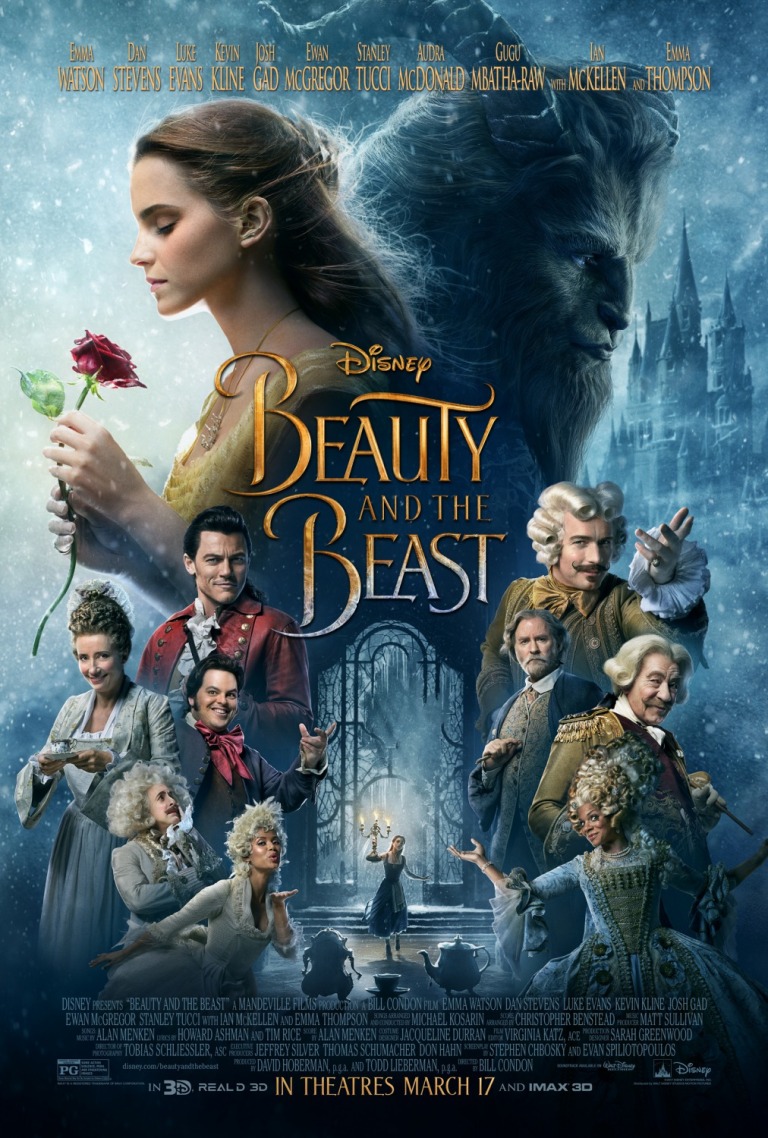 Confession time: I have never seen the animated Beauty and the Beast. Until The Lion King, I never got wrapped up in the second Disney golden age and I just never got around to seeing it. Does the new live-action adaptation work for viewers on which nostalgia for the original has no hold?

The answer is: yes…mostly. Even though I never saw the original, I know the basic story and all the big songs – though, I’m more partial to “See My Vest” than “Be Our Guest” – so, the new adaptation isn’t completely unfamiliar ground to me. Belle (Emma Watson) is a bookish young woman in a small French village where the villagers consider her odd. Her father, Maurice (Kevin Kline), is a widower that makes music boxes. Belle is forever being pursued romantically by the pompous Gaston (Luke Evans), who is always accompanied by his sidekick LeFou (Josh Gad). When Maurice goes missing on a business trip, Belle goes out looking for him and finds he has been imprisoned in a creepy, crumbling, but magical castle by the Beast (Dan Stevens), a cursed prince that has been magically wiped away from memory. Belle agrees to take her father’s place and the Beast’s servants-turned-household-items: Lumiere (Ewan McGregor), Cogsworth (Ian McKellen), Mrs. Potts (Emma Thompson), Chip (Nathan Mack), and Plumette (Gugu Mbatha-Raw) believe that Belle may be the one to lift the curse and transform them all back to human form before the spell becomes permanent. All they have to do is help these two would-be lovebirds that hate each other fall in love. No pressure!

The story is as old as time (sorry, couldn’t resist), but despite the cries of Stockholm Syndrome, I think Director Bill Condon makes it work. You really do see the Beast warm to Belle and Belle come to see the beauty inside the Beast. I will say, though, they could have made the Beast a little more monstrous-looking. His appearance is akin to Chewbacca with horns, and everyone loves Chewie! The other misstep Condon makes is using digital effects to animate the Beast’s face as opposed to practical makeup. The digital effect works sometimes, but in others, it looks odd and takes the viewer out of the film. Other than that, though, it’s a fine movie. The songs are good and well-performed, even if it feels odd hearing them sung by unfamiliar voices. The film does drag in parts though, but I’m not sure if that’s due to the extra material Condon and Composer Alan Menken, who crafted some new songs with Lyricist Tim Rice (the original Lyricist for the animated feature, Howard Ashman, sadly passed away in 1991), or if the story itself is just too flimsy to support a film that’s over two hours – the original is eighty-four minutes.

The cast is what really propels the film, though. Emma Watson owns the role of Belle and makes it hers. Only Hermione Granger could be the one to play Belle – it just fits perfectly – and Watson does a great job here. Stevens is good as the Beast, but again, the effects hamper his performance. Also, his human look is rather bland and uninteresting at the end. You almost imagine Belle asking him to transform back. Luke Evans is also pretty perfect as Gaston. He captures the pomposity and villainy of the character. The supporting cast is fantastic with McGregor and McKellen taking top honors. Stanley Tucci also appears as the harpsichord and Audra McDonald as his wife, the wardrobe. I really enjoyed Josh Gad’s LeFou as well. If you’ve seen any story about this film, you know that Gad played LeFou as a gay character and Condon claimed it was subtle, but if that’s subtle, I wonder what his obvious would be. He’s great as the comic relief and I just loved subversive nature of playing LeFou as gay. I cackled imagining all the tight asses who see this film and getting apoplectic about it.

Overall, I liked Beauty and the Beast, but I wasn’t blown away by it. The dodgy effects definitely didn’t help, nor did the more sluggish moments. It’s enjoyable and we can expect to see Disney make more of these unnecessary adaptions in the future.