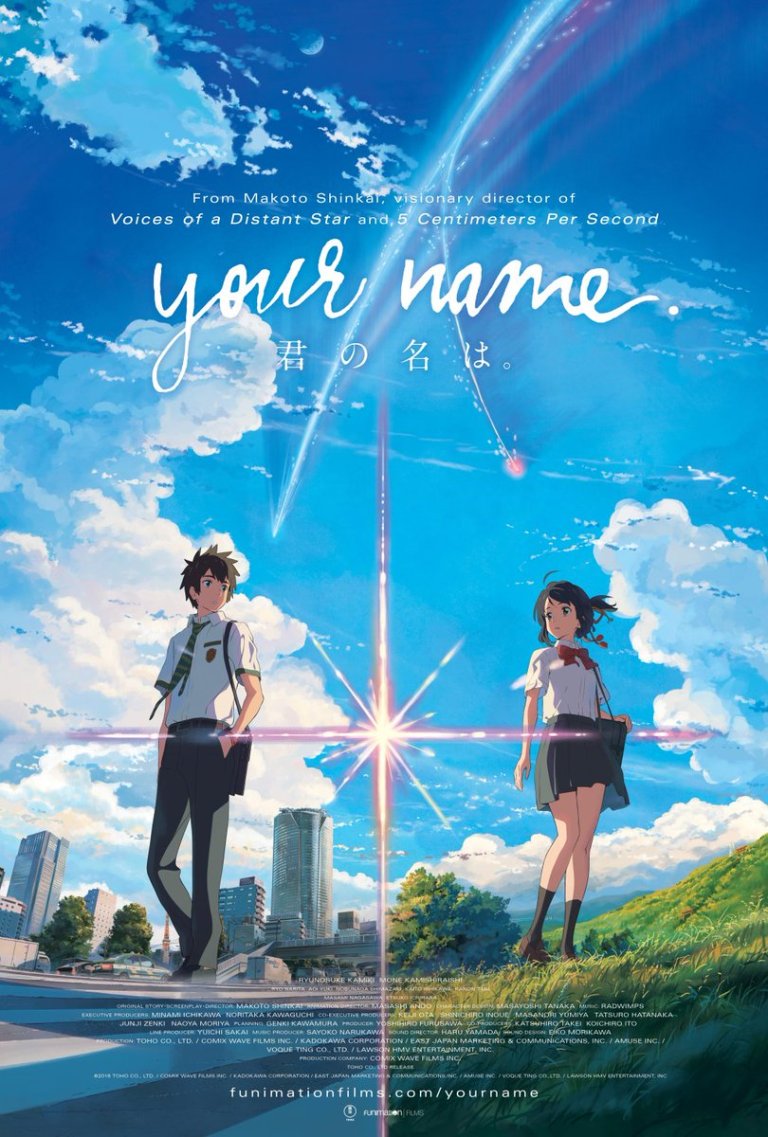 A comet streaks through the sky and suddenly, Mitsuha (Mone Kamishiraishi) and Taki (Ryûnosuke Kamiki) realize that they have switched bodies. Then, after a night’s sleep, they have swapped back with no memory of what occurred while they were switched. After that, the phenomenon continues to happen with no rhyme or reason. The two teens do not know each other, nor do they live in the same area of Japan – Taki lives in Tokyo, while Mitsuha lives in a more rural area. Being that the switch occurs randomly and they have no idea how to stop it, the two begin leaving notes for each other on how to conduct their lives so as to not screw up the other. As time passes, they form a strange kind of friendship as they try to improve upon each other’s weaknesses and try to understand how the other half lives.

Your Name is a beautifully-animated film with an engaging story. The film is funny, but as the story progresses, the tone becomes much more poignant and somber. There is a twist here that I won’t ruin, but it is absolutely heartbreaking. I don’t want to spoil a lot, because you really have to see the film and watch it unfold for yourself. There is a lot of bouncing back and forth between Taki and Mitsuha and the storytelling isn’t exactly linear, which was a bit more disorienting in this film than it would have been in an English language film. Also, at times, the dialogue moved too quickly for the subtitles to keep up, especially when there are also background subtitles from another source like a television or radio. Trying to keep up on the big screen felt a bit more difficult than it might on a TV screen. Also, when you’re at the movie theater, there’s no way to rewind in case you missed something. There were a few elements of the story that I found a little confusing and the lead up to the end, which I was ultimately happy with, was more than a little frustrating in order to ratchet up the tension. It felt like one step too far after the turns the story had already taken. That being said, the characters are likable and despite any minor confusion with the plot, the movie is very touching.

The voice work here is very good. The two leads do an excellent job changing their voices a bit when the other character is inhabiting their character’s body. It’s subtle, but I noticed it early with Taki who speaks a bit differently when he’s himself.

Overall, while I know anime isn’t for everyone, I highly recommend Your Name. It’s a really good story with nice performances and beautiful animation. Can’t ask for much more from an animated film. I had some issues with the film, but they’re minor in relation to the whole. Definitely check it out if it’s playing in your area, or if you don’t think you’ll be able to handle the subtitles on the big screen, check it out when it hits BlueRay.