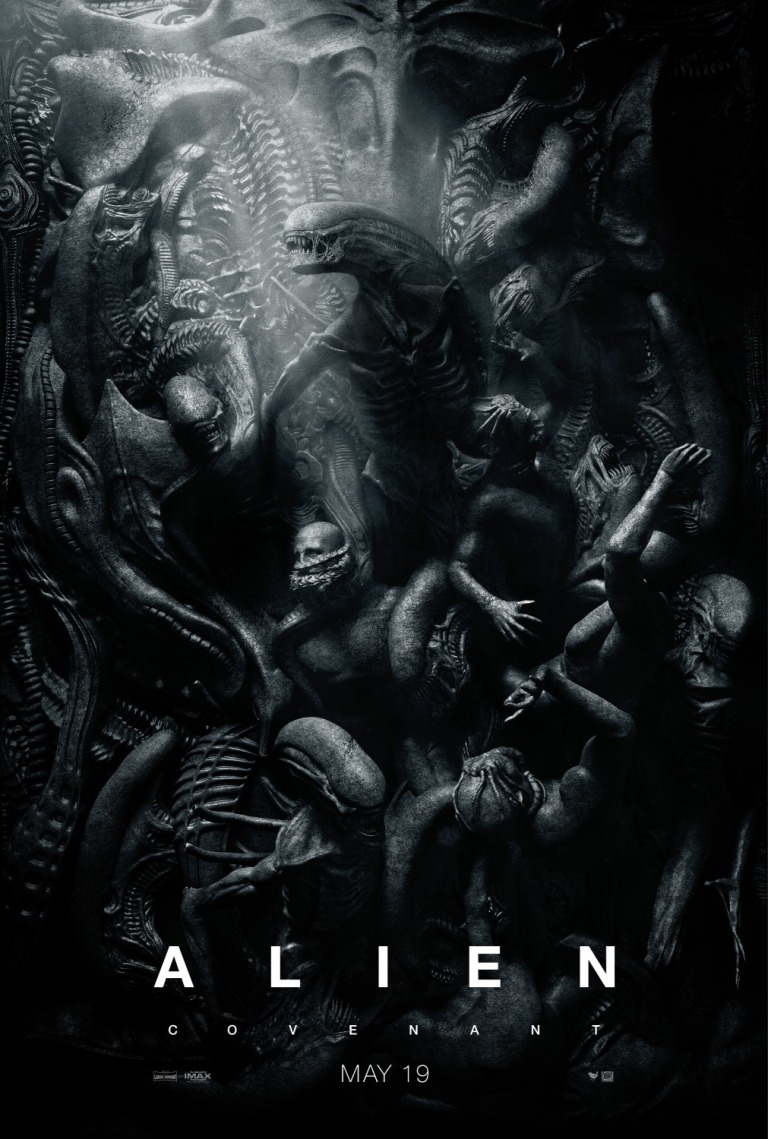 Director Ridley Scott launched the Alien franchise back in 1979 and then returned in 2012 to tell the back story with Prometheus. That film divided the fan base and Scott is back again to continue the story he began in Prometheus with Alien: Covenant. Does this latest film get the franchise back on track or make an even bigger mess?

The film takes place ten years after Prometheus and eighteen years prior to Alien. The colony ship Covenant is on its seven-year voyage to the planet Origae-6 with two thousand colonists in hyper-sleep as well as a thousand frozen embryos. There are fifteen crew members and they are awakened early by the ship’s synthetic, Walter (Michael Fassbender), when the ship is damaged by a neutrino burst. Walter is the latest model in a line of synthetics descended from Prometheus’ David (Fassbender). The Covenant’s captain is killed as a result of the accident, which puts the religious Oram (Billy Crudup) in charge. While making repairs, the ship’s pilot, Tennessee (Danny McBride), picks up a human transmission, which should be impossible. The transmission is traced to an inhabitable planet and Oram elects to go and check it out as a possible replacement for Origae-6 in order to cut down on the travel time, ignoring the fact that Origae-6 has been completely vetted and they know absolutely zero about this new planet. The only dissenting voice comes from Daniels (Katherine Waterston), the second-in-command and former captain’s widow. This being an Alien film, as soon as the crew makes the ill-advised trip down to the new planet, everything goes to shit. The crew is rescued by the reconstructed David—he was only a severed head at the end of Prometheus—and he claims that the ship he and Elizabeth Shaw (Noomi Rapace) escaped in at the end of the last film crashed on this new planet and unleashed a weapon that resulted in the vicious Neomorphs roaming around the place. Is David telling the truth? Is that a completely rhetorical question? Will the crew of the Covenant escape this hell? Will we ever find out how that Engineer ended up on LV-426—the planet in Alien?

So, let me get this out of the way first: I didn’t completely hate this movie, but it has a lot of problems. The cinematography by Dariusz Wolski is absolutely stunning as are the visual effects—this is a beautiful and beautifully-shot film. While the cast does the best with the material they’re given, Fassbender is the clear standout. He stole the film in Prometheus and is the star of Covenant. I also enjoyed Danny McBride’s performance for the most part and felt really sorry for Katherine Waterston, because she gives it her best, but the script does her no favors. The marketing and publicity is selling her as the new Ripley (Sigourney Weaver in the original films), but she’s not even close to being that heroic. Okay, with the praise out of the way, let’s get into what’s really wrong with this film.

Prequels generally suck. They just do. There are a few exceptions to that rule—X-Men: Days of Future Past, which is really half a prequel; the current Planet of the Apes trilogy—but for the most part, prequels are just a bad idea. In some cases, they can work, but most movie prequels almost always end in disaster. The films tend to ignore the characters in the service of telling a tension-free story, because the audience already knows where it all ends up, and without characters to root for, the audience tends not to care. Also, the filmmakers usually fail at the one job they have with a prequel and that’s to make sure that it links up properly with the film to which it is connecting. Prometheus was originally intended to be a straight up prequel to Alien and then Ridley Scott got the idea to make a headier science fiction film and he failed on both fronts. Things don’t get any better with Covenant. First of all, we’re still no closer to LV-426 and Alien, which is frustrating. I wish Dan O’Bannon, screenwriter of the original film, was still alive so that he could admit that Ridley Scott is really overthinking the origin of the Xenomorphs, who finally make an appearance in this film after being no-shows in Prometheus. What Covenant reveals—and this is a MAJOR SPOILER, so stop reading now if you don’t want to know—is that David is responsible for the Xenomorphs, the eggs with the face-huggers, all of it. He has been experimenting with the Engineers’ weapon and trying to invent the “perfect organism.” All he needed were some dumb humans to come along and test out his theories. And boy, are the people on board the Covenant dumb. Here’s the problem with making David responsible for all of it: how does the Engineer’s ship on LV-426 have David’s Xenomorph eggs on board when the Engineers didn’t invent them and based on what we see in Covenant, David has wiped out the Engineers on their home world? In his quest to make David the ultimate villain—read: Satan—Ridley Scott has moved even further away from the original film. Now, we’re supposed to be getting two more Alien prequels and maybe they’ll bridge the films properly, but I’m not hopeful for that. For Pete’s sake, this film doesn’t even answer the questions posed by Prometheus, much less Alien!

So, on top of essentially destroying the mythology created in the first two, vastly superior, films, Scott loads this film with a lot of tired tropes from the past Alien films—more specifically, the three films he’s directed in the series. The robot is evil—check. Using the airlock as a weapon—check. Drawn in by a distress beacon—check. It’s just all so “been there, done that.” Beyond that, the other tropes—specifically, the gestation period of the Xenomorphs—are not at all consistent, even within this single film! That is beyond frustrating as a viewer. It feels like Scott and his screenwriters are just making up the rules as they go along in order to do what fits best for the script as opposed to what has gone before in the films. Now, Covenant is not the first Alien film to play fast and loose with the gestation cycle, but it’s ridiculous when that cycle varies from character to character in the same damn film.

This movie is also not that scary as everything is completely telegraphed and the characters don’t seem to have a lot of terror in regards to the aliens. They seem far more interested in trying to solve a mystery than trying to survive. The film is certainly gory, but that does not equal terror. The sense of dread that permeated previous Alien films is completely absent from this film, at least until the very end.

So, a lot of what I’ve listed here has to do with structural elements of the film, but the specifics make the script even worse. As I mentioned, the characters are very stupid. This was a problem in Prometheus too—hey, maybe don’t play around with the weird alien creature that looks like a fucking cobra, okay? One particular scene stands out for me. It comes right before the audience finds out that David is behind the Xenomorph eggs and face-huggers. Oram finds out that David is either working with the Neomorphs—the alien incarnation prior to the Xenomorphs—or is at least not trying to stop them from killing his crew, and instead of immediately blowing David’s head off with the machine gun in his hands, he chooses to follow the mad scientist deeper into his lair, so he can “find out what’s going on.” Uh, your crew member just got decapitated and this robot is just standing around, letting it happen. Shoot that asshole in the face! Believe me when I say, that is only one of many stupid decisions made by the Covenant crew. Katherine Waterston seems to be the only character educated on how these stories work. She says from the jump that it’s a bad idea to go to this new planet when the place they have picked out is already cleared. Now, I understand that stories and conflict develop from characters making mistakes, but these are not the mistakes of intelligent characters, these people are just dumb. Plus, aside from David, the other characters are merely sketches and not fully-realized at all. Waterston gets the most development, but really only in relation to her deceased husband. Crudup’s Oram is religious, but it never really plays into anything, nor does Scott use that to explore the deeper meanings he clearly wants to get to in this film. Demián Bichir and Nathaniel Dean play a gay couple on the crew, but that barely plays into a prologue short that is not included in the final film, much less the actual film itself. It’s nice that Scott didn’t define them as “the gay couple,” but that at least made them unique.

Getting into story mechanics, David’s plan is very simple to figure out, but with the chain of events that leads up to the end of the film, it makes zero sense how he makes any of it work. I also can’t stand in prequels like this how the technology is light years ahead of the films that were made in the 70s and 80s. Yes, production values and movie technology has gotten better, so everything should definitely look different, but the ships in Prometheus and Covenant are clearly more advanced than the ones in Alien and Aliens and based on the time line of the films, that makes zero sense.

If you want my absolutely honest review of Alien: Covenant: just stay home and watch Alien and Aliens. They’re far superior films and tell more coherent stories. However, if you want to see the latest chapter in theaters, go to a matinee. This film, while expertly made from a technical standpoint, is not worth full-price tickets. The Alien franchise is much like the Terminator franchise—both probably should have stopped after the second film. However, if filmmakers want to continue telling stories featuring the Xenomorphs, at least have something new to say. As with Prometheus, Ridley Scott is trying to dig into deeper subjects like creation and destroying those creations—there are a lot of Paradise Lost references—but when you also have to make a monster movie on top of that, your big message may get a little lost. Points for trying, but if he doesn’t want to really be making Alien movies, he should just let Neill Blomkamp make his.