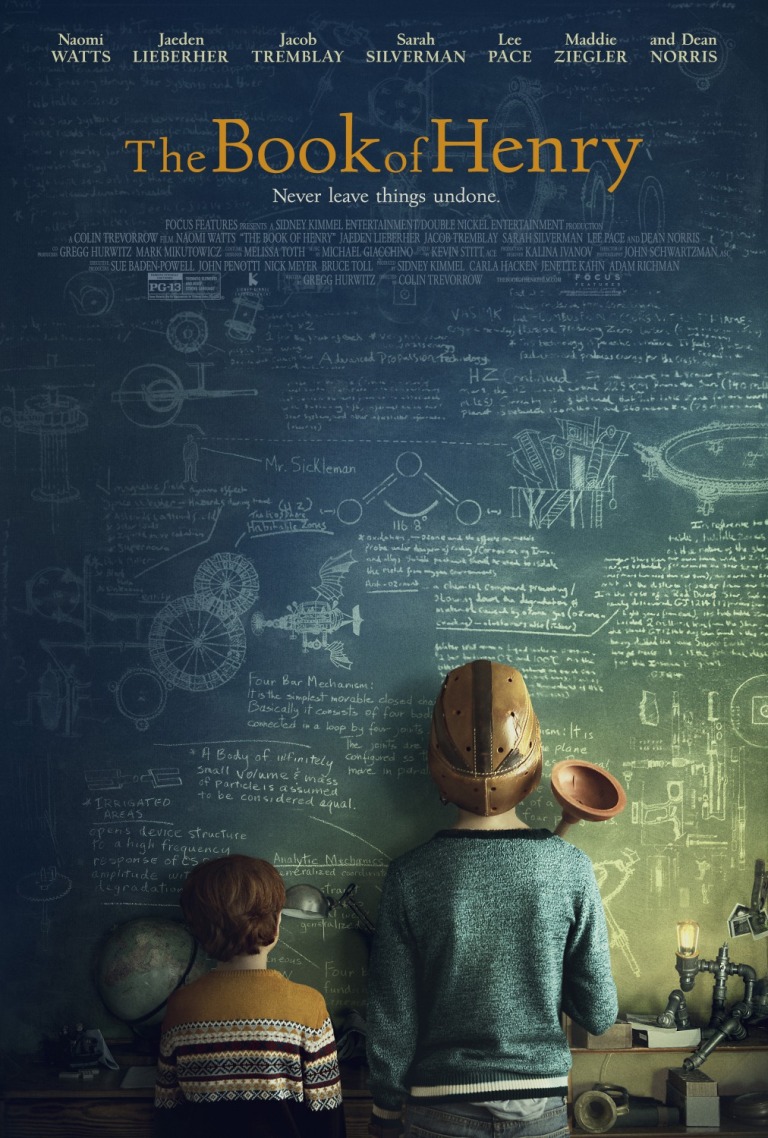 Directed by Colin Trevorrow, The Book of Henry is a strange film. When I left the theater, I felt that I liked it, but the more I thought about it, the more the film fell apart, despite the great performances from its young leads.

SPOILERS THROUGHOUT (it’s the only way to discuss the film, sorry)

Henry (Jaeden Lieberher) is an 11-year-old genius. Because his mother, Susan (Naomi Watts), is an immature mess, Henry is essentially responsible for running the household and raising his little brother, Peter (Jacob Tremblay). Henry is known for his inventions and his heavily detailed plans, which he uses to solve all manner of problems. The biggest problem Henry is dealing with is that he believes his friend and neighbor, Christina (Maddie Ziegler), is being abused by her stepfather, Glenn (Dean Norris). Henry would love to expose the creep, but one problem: the two families live in a small town and Glenn is the Chief of Police, where he wields a lot of power. Before Henry can solve his problem, he finds out he has an inoperable brain tumor. Henry passes away and now Susan and Peter have to go on without him. This would have been the opportunity to tell a sweet family drama about a mother and brother coping with the loss of Henry. However, the screenplay, written by Gregg Hurwitz, takes a major left turn when the audience finds out that Henry’s big plan—the one that he now needs his mother to implement—is that he planned to murder Glenn in order to free Christina from her living hell. And just as she did when he was alive, Susan follows Henry’s instructions to the letter. Wait, what?

So, the reason why I liked this film was solely because of the performances of Lieberher and Tremblay. They are both two fantastic young actors and I’ve enjoyed their work in the past. Lieberher is very talented and is a very mature performer for his age. Tremblay is basically the human Baby Groot—he makes everything better and is adorable. A good cast can take a mediocre movie far and unfortunately, with the patchwork story and dramatic tonal shifts, The Book of Henry is just that—a mediocre movie.

I found Watts’ Susan to be completely unbelievable. I don’t doubt that there are immature parents in the world like her, but the level of her incompetence is staggering. We’ve seen several stories where the child is the parent and the parent is the child, but this film takes it to a new level. Also, I couldn’t get past the fact that Susan would just wholeheartedly embrace the idea of murdering another person just because her genius kid said it was the only way to stop the abuse. Both Susan and Henry witness the abuse, as Henry’s window looks right into Christina’s room, so they totally could have video recorded the abuse and taken it to the authorities. The only explanation I can think of as to why that was not done in this film is because the characters have witnessed how video doesn’t always seal the deal in criminal cases, but there’s no real way to explain away child abuse. So, the murder plot doesn’t really jibe with the rest of the story, especially when the story that was developing about Henry’s illness and how Susan and Peter would go on without him was compelling enough without adding a thriller element that ultimately feels out of place. What results is half of a good movie that feels like two different films were smashed together. Hurwitz is also a novelist and The Book of Henry definitely has the feel of a novel adaptation that couldn’t cram all the story of the novel into 105 minutes.

Lieberher and Tremblay are great, while Watts does her best with the material. Ziegler does well with her limited dialogue, but she’s supposed to be traumatized and withdrawn, so she nails that perfectly. Norris is also good as the abusive father. He’s gruff enough to be intimidating, but not so much that he becomes a cartoon character. Sarah Silverman does a nice job as Susan’s alcoholic friend and I would have loved more of Lee Pace as Henry’s doctor. I think his role might have been expanded if the murder plot didn’t dominate the second half of the film.

Ultimately, The Book of Henry has to be marked as a disappointment. I had high hopes for this film considering the cast and the fact that Trevorrow is in charge of Star Wars Episode IX. Unfortunately, Hurwitz’s script is too muddled to make the film a satisfying whole. The possibility exists that the script was much longer, made a bit more sense, and was ruined in editing, but I’m not sure that’s what happened here. I wasn’t the biggest fan of Trevorrow’s Jurassic World and now with this film out there, let’s just say that I’m worried about Star Wars in 2019.