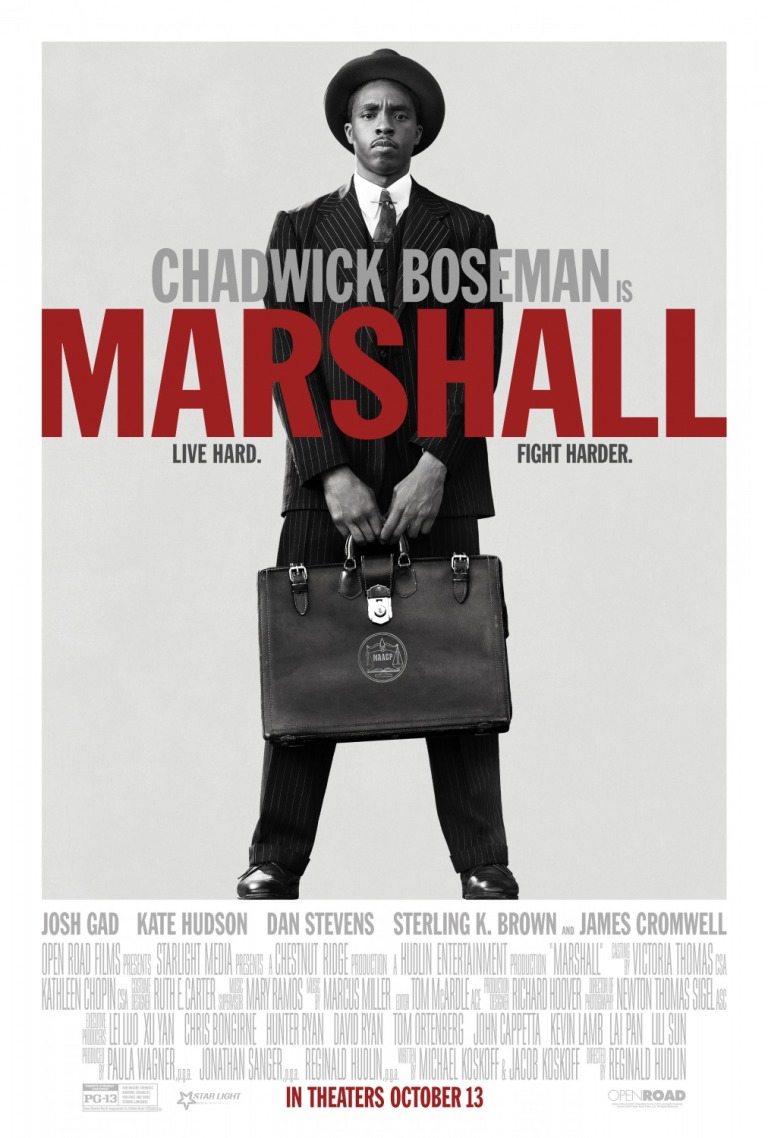 Directed by Reginald Hudlin, Marshall tells a story from the life of Thurgood Marshall prior to his becoming a Supreme Court Justice. However, would this great man have been better served by a film about his entire life?

It is 1940, and Thurgood Marshall (Chadwick Boseman) is the lone lawyer for the NAACP. He travels all over the country, defending African-Americans who have been arrested for crimes simply due to their race. He is sent to Connecticut to defend Joseph Spell (Sterling K. Brown), who is accused of raping his employer’s wife, Eleanor Strubing (Kate Hudson). Marshall is prevented from directly defending Spell, because he is not a member of the Connecticut Bar Association, but let’s be honest, it’s because he’s black and racism was not simply confined to the South. So, the NAACP tracks down a local attorney, Sam Friedman (Josh Gad), to serve as Spell’s attorney of record. Friedman is a lawyer that deals in technicalities in order to win cases for big clients, so he’s not happy about having to take on a criminal case. Throw in a prejudiced judge (James Cromwell) and the uphill climb to exonerate Spell is that much more difficult. However, is Spell actually innocent or is the story altogether different?

While the story was an interesting legal case, it didn’t feel like it has enough meat on its bones to serve as a biopic for Thurgood Marshall. This is especially the case since Marshall was forbidden from even speaking in the courtroom, so he has to have Friedman try the case by proxy. So, while the movie has some good personal moments for both Marshall and Friedman, the film becomes much more about the case in the second half and less about Marshall the man. Very odd choice considering the title of the film. A lot of recent biopics have taken this approach—telling one story from a subject’s life as opposed to a wider view. Because of who Marshall was and his impact on history, I think a more expansive scope would have worked better.

The strongest aspect of the movie is the cast. Chadwick Boseman has shown himself to be a consummate performer in all of his roles. He’s also become a kind of go-to actor for biopics like this. He’s a fantastic actor and one that I look forward to seeing in any role he’s in. Gad, who is traditionally a comedic actor, does very well with the dramatic elements of this film. Also, he and Boseman make a great odd couple. Sterling K. Brown is very good, but I felt that a man facing a life sentence might have been a bit more passionate and demonstrative in his defense. Brown played Spell a bit too subdued for my taste. While James Cromwell’s character is completely infuriating to anyone who isn’t a racist, he does a great job with the part. I would have liked to have seen more of him, though. Hudson also does a really nice job here as the alleged victim of Spell’s alleged crime.

Overall, Marshall is a fine film and a nice courtroom drama, but it’s a subpar biopic of Thurgood Marshall. This is a man who broke barriers in this nation and the film with his name as the title boils down to little more than a Law & Order episode. The performances are great, but you’re better off catching this one on cable.