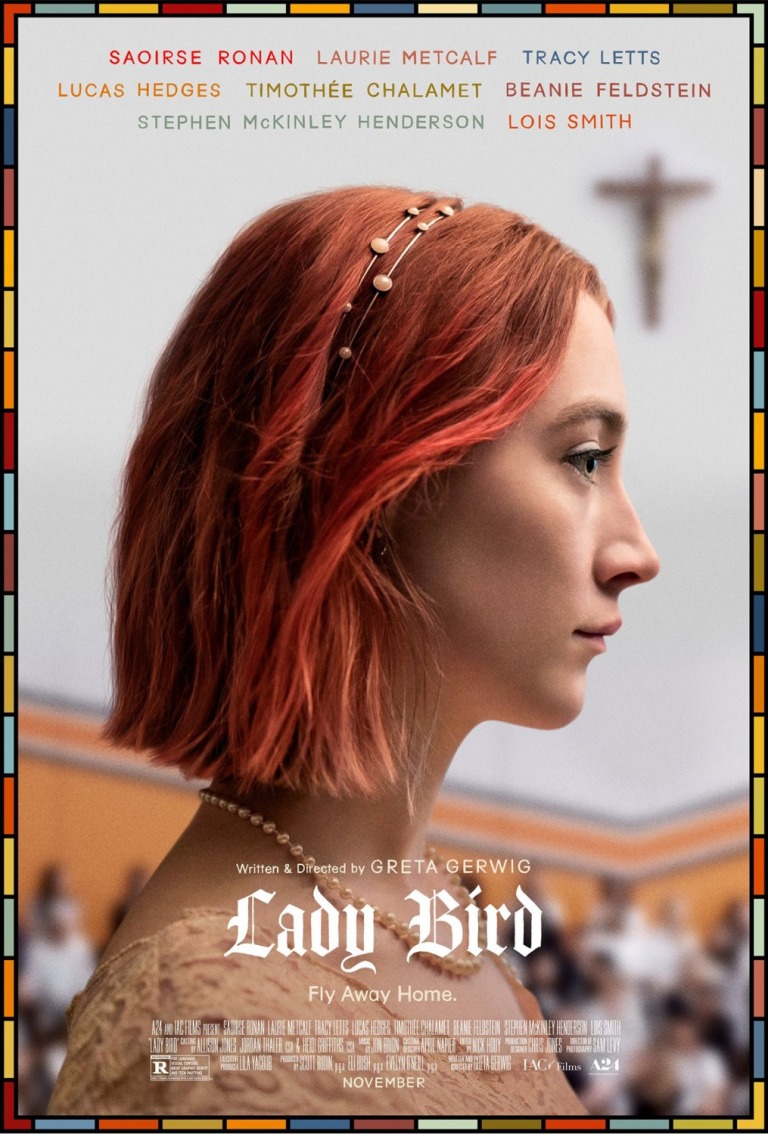 Written and Directed by Greta Gerwig, Lady Bird is another in a long and storied history of coming of age films. Does this one stand out from the pack or is it an also ran?

It’s the early 2000s and Christine “Lady Bird” McPherson (Saorise Ronan) is a senior in Catholic school, looking forward to leaving Sacramento for college—preferably on the east coast. Her parents, Marion (Laurie Metcalf) and Larry (Tracy Letts), can’t afford that, so Marion tries to sell Lady Bird on local colleges. Lady Bird—the name Christine gave herself—does not exactly fit in at her school. She and her best friend, Julie (Beanie Feldstein), are pretty much outcasts, but Lady Bird longs for acceptance from the more popular kids. The film follows her through the final year of high school and the ups and downs she experiences as she discovers who she really is, despite being supremely confident in her identity.

With Lady Bird, Greta Gerwig has crafted a hilarious, but heartwarming coming of age tale with a distinct heroine at its center. It is also a nice meditation on class and the struggles most working families face. There’s a scene where Larry discovers that he and his son, Miguel (Jordan Rodrigues), are going for the same I/T job that is absolutely heartbreaking. And that’s how Lady Bird is, you’ll be laughing hysterically, but then it hits you with poignant dramatic moments that reduce you to tears.

The main conflict in the film, aside from Lady Bird fighting with herself about who she wants to be, is between Lady Bird and Marion. They have a contentious relationship as Lady Bird wants to dream big and shoot for the stars, but her mother tries to prepare her for the realities of life, at times a bit too harshly. However, Lady Bird isn’t always the easiest character to like, so you find yourself hating some of the things she does or says, but still rooting for her to make the right decisions. That’s the sign of a great character.

The cast is fantastic and elevates Gerwig’s already great script. Ronan is magnetic as Lady Bird and proves equally adept at handling both the comedy and drama of the piece. Metcalf is equally great as Marion. We see Marion from various angles, allowing Metcalf to really dig into this wholly-realized character. Tracy Letts is a goddamned national treasure. The deft subtlety he applies to this role is incredible. I’ve enjoyed him in most everything I’ve seen him in and his performance in Lady Bird is no exception. Lucas Hedges and Timothée Chalamet do really nice work as the boys in Lady Bird’s life and Beanie Feldstein has several amazing scenes as Julie.

Overall, Lady Bird is an absolute delight. Just when I thought it was going to chuck some great dramatic material aside for laughs, it came back and tugged at my heartstrings. Definitely check it out.