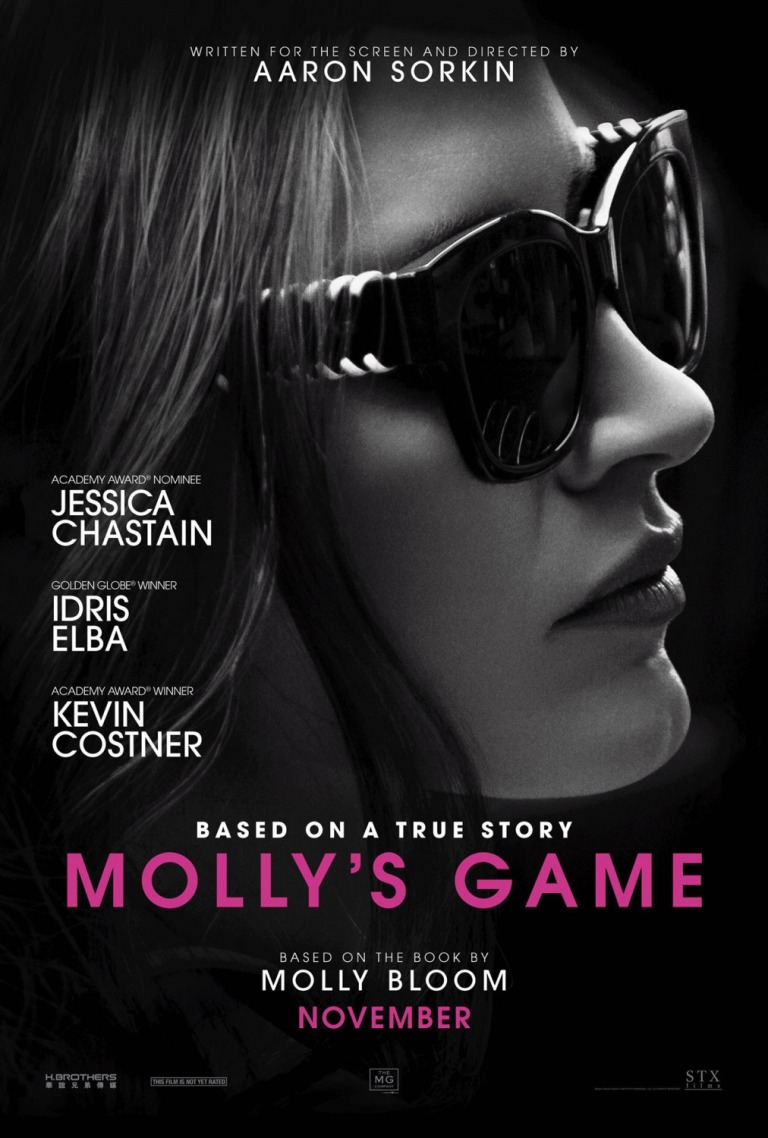 After decades of handing over stellar scripts to other directors, Aaron Sorkin finally steps behind the camera himself to direct Molly’s Game, a true life story of high stakes, high living, and the consequences that come with that.

Molly Bloom (Jessica Chastain) was a world-class skier planning to head off first to the Olympics and then to law school. However, a freak accident on the slopes causes her to reassess her future. She decides to take some time off and head to Los Angeles. While in L.A., she takes a job with Dean Keith (Jeremy Strong), who, on the side, runs a high-stakes poker game filled with rich and famous people like “Player X” (Michael Cera), whose real name is never revealed in the film. Molly plans the game for Dean for quite some time, but when he crosses a line with her, she takes over the game herself, eventually moving it to New York. However, when Molly gets caught up in a larger FBI sting operation, she must turn to Charlie Jaffey (Idris Elba), a former prosecutor-turned-defense lawyer, to defend her against charges she believes to be unjust.

If there’s one thing that’s clear from Molly’s Game, it’s that Aaron Sorkin is not only a fantastic screenwriter, but a competent director in his own right. Molly’s story is compelling, for sure, but my one issue with the way the story is told is that most of it is told in past tense. So, while many of the things that happen to Molly are shocking, it may have worked a bit better if the audience didn’t know that she’d make it through all right. Then again, since the film is based on her memoir, I guess that could be considered a moot point. It was also interesting how in Molly’s book, she named names, but in the film, Sorkin shied away from doing that, (a minor bit of research will reveal that Cera’s “Player X” is essentially Tobey Maguire. He…does not come off well). It’s possible that the studio got antsy about that, but by keeping the players’ identities secret, it allows Sorkin to focus on Molly herself, and that really is the best decision.

Molly is a complex character, unafraid of accepting the fact that her own weaknesses and mistakes helped bring about her downfall. However, much of her character is rooted in her past where her psychologist father, Larry (Kevin Costner), would relentlessly push her to excel at skiing or would interview her in videos, which revealed that even at a young age, Molly was able to see through much of society’s bullshit. It’s a fascinating character study with a magnetic actress at the top of her game.

The entire cast is fantastic here. Idris Elba makes the most out of his role, where he’s really the sounding board for Molly to tell her story, and he has some great scenes with Chastain. I also really liked Michael Cera as “Player X.” Although he’s been in several high profile projects, he still feels like a very underrated performer. The supporting cast is incredible with actors like Bill Camp and Chris O’Dowd putting in memorable performances as their characters pass through Molly’s life and add to her story. Of course, though, this film completely belongs to Jessica Chastain, who is absolutely magnetic in her performance. She’s one of my favorite actresses working today and her great capacity to completely dominate a film is very much on display in Molly’s Game. You won’t be able to take your eyes off of her.

Overall, I really enjoyed Molly’s Game. Sorkin’s script is great with punchy dialogue and Jessica Chastain just owns the role. I can’t heap enough praise on her. The story is compelling, but it fell just short of me loving it. Still a really fine film and one that you should definitely check out, though.