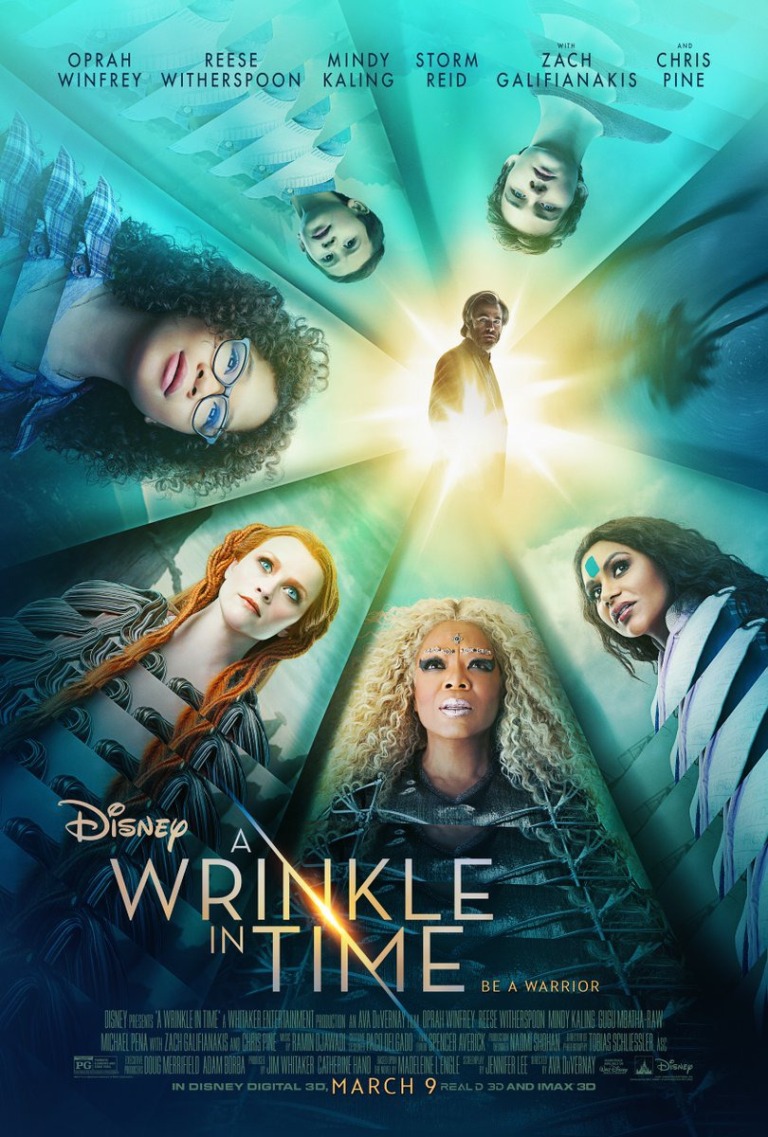 Meg (Storm Reid) is a brilliant, but introverted girl who has been adrift in life since her father, Alex (Chris Pine), disappeared several years ago. An astrophysicist along with his wife, Kate (Gugu Mbatha-Raw), Alex was studying how to travel between worlds using frequencies and the power of one’s mind. Meg’s adopted brother, Charles Wallace (Deric McCabe), is even more brilliant than Meg and has a rather unique way at looking at the world. Somehow, Charles Wallace has befriended three powerful beings – Mrs. Which (Oprah Winfrey), Mrs. Whatsit (Reese Witherspoon), and Mrs. Who (Mindy Kaling). These ladies keep and defend the light of the universe from the IT (David Oyelowo), a dark entity that is essentially the source of evil in the universe. The IT has imprisoned Alex on its home world, Camazotz, and Meg is determined to get him back no matter the cost.

If there’s one thing you can say about A Wrinkle in Time, it’s visually spectacular. DuVernay and her team have crafted some stunning visuals to bring the story to life. So, you will definitely enjoy looking at it if not enjoying the movie itself. That’s not to say I didn’t enjoy A Wrinkle in Time, I did, but I also never read the novel, so I’m sure there were things that I missed that the book’s lovers either delighted in seeing or lamented their exclusion. For me, though, the story felt too small, lacking the grandeur of the visuals. It was like the plot didn’t fit the scale of the film. Also, the film seemed to be going along fine until Meg, Charles Wallace, and Calvin (Levi Miller) get to Camazotz. At that point there was a weird shift where everything started happening too quickly and it made the story feel truncated. It’s possible that that’s the way the novel goes, but everything on Camazotz felt very abrupt. Oh? What’s that? Who’s Calvin? Oh, well I guess I didn’t mention him in the plot summary. Calvin is a classmate of Meg’s who comes along on the adventure because of…reasons. He clearly has a crush on Meg, but when three magical beings appear out of nowhere and start talking about leaving the planet, that’s a decision you may want to weigh a little more heavily than Calvin does here. Clearly, Calvin is connected to Meg and Charles Wallace somehow, but his role is pretty much reduced to standing around and staring at Meg lovingly. The underdevelopment of Calvin aside, there are some very nice emotional moments throughout the film that may make certain audiences get a little misty. Those were the parts I enjoyed best.

The cast assembled here is absolutely incredible. Storm Reid is great as Meg, even though the script doesn’t do her a lot of favors in some spots. Reid manages to convey all the emotions going through Meg’s head expertly and you really feel for her. I also really loved McCabe as Charles Wallace. Little kids are so hard to cast right and DuVernay nailed this choice. McCabe really does a great job delivering precocious, but not obnoxious. Despite the script letting him down, Miller is also good as Calvin. I just wish he’d had more to work with. The three ladies guiding our young heroes are all great as well. Oprah has the presence and gravitas to carry the load as Mrs. Which, who is the de facto leader of the group, while Witherspoon expertly captures Mrs. Whatsit’s innocence and whimsy. Kaling does well with Mrs. Who, but the role  is quite bizarre as she only speaks in quotations, most of which weren’t even around when the book was published. So, her part felt a little out of place. I also really liked Zach Galifianakis and Michael Peña in their supporting roles as Happy Medium and Red. Again, though, because the story feels a bit truncated, they didn’t get nearly as much time on screen as I would have liked. Pine and Mbatha-Raw have good chemistry when they’re on screen together as Meg’s parents, but they also shine when they’re apart. Pine is becoming quite the go-to actor, while I’ve loved Mbatha-Raw in pretty much everything I’ve seen her in.

Overall, I enjoyed A Wrinkle in Time, but I couldn’t help feeling that it could have been much better. Again, I never read the novel, so I don’t know how faithful the film was to the novel, but it constantly felt like the scope DuVernay was going for was just out of reach. It’s not a bad movie by any stretch, but it can’t help but be disappointing when you consider that it could have been great.