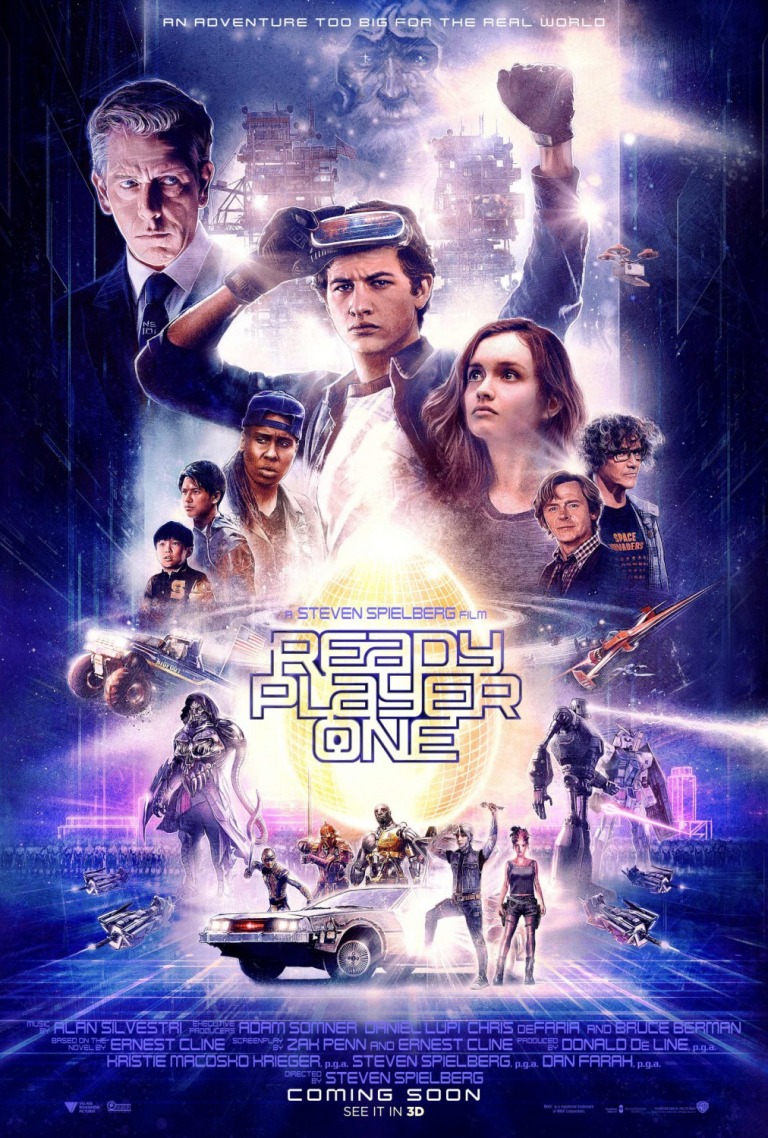 Director Steven Spielberg delivers an adaptation of Ernest Cline’s sci-fi novel, Ready Player One. Is the film a game-changer or just a re-hash of movies you’ve already seen?

It’s 2045 and life on Earth is hard. The only way to escape is to go into the virtual reality world of the OASIS. The OASIS was created by James Halliday (Mark Rylance), who upon his death, offered a challenge to all those who used the OASIS. If any user can find an “Easter Egg” in a game Halliday created within the OASIS, that person would become the sole owner of the OASIS and enjoy all the spoils that would entail. Enter Charlie Bucket…I mean, Wade Watts (Tye Sheridan), a teenager living in a Columbus, OH slum called The Stacks—because it is, essentially, a bunch of motor homes stacked up on one another. Wade is a Gunter—a player hunting for Halliday’s Egg—and has made friends in the OASIS where he goes by the name Parzival. His friends include Aech (Lena Waithe), Daito (Win Morisaki), and Sho (Philip Zao). While attempting to complete Halliday’s first challenge, Wade meets Art3mis (Olivia Cooke), a skilled and famous Gunter. Wade is instantly smitten with her, even though, as Aech points out, she could literally be anyone. Along with all the eager players, the corporation IOI is also seeking the egg. Led by their ruthless CEO, Sorrento (Ben Mendelsohn), IOI forces debt-laden users to work for them in the OASIS until they’ve paid off their debt, which, of course, they never will. For Wade and his friends, the quest for the egg soon becomes a fight against IOI and its power in the real world.

In case you missed my not-so-subtle dig in the synopsis, Ready Player One is essentially a digital Willy Wonka and the Chocolate Factory right down to featuring a cover of “Pure Imagination” from Gene Wilder’s 1971 film. Of course, this is exactly how the blurb on Cline’s novel describes it: “Willy Wonka meets The Matrix.” Ah yes, except in The Matrix there are actual consequences for those who perish in the simulation. In Ready Player One, a person “zeroes out,” which means that they lose all their digital possessions and progress. However, that was what confused me a bit about the OASIS itself. Is it a VR Internet or is it a game? The two seem to bleed together, but the fact that there don’t seem to be any real world consequences made the whole thing feel hollow. Many scenes felt akin to watching someone else play a video game, which I found to be boring. So, because I wasn’t completely clear on the details of the OASIS, I was never sure what the rules were in the digital world. This isn’t like The Matrix where everything is lifelike and those in the simulation can’t tell the difference between what’s real and what’s not. It’s important to understand the distinction between whether the OASIS is a VR world or a game, though. While users can definitely play games in the OASIS, they exist and appear as themselves, or at least their personal avatar. So, it is Parzival fighting, not a separate avatar. Does this mean that someone could shoot and “kill” Parzival outside the confines of a game? If so, what are the consequences for the killer? These are the types of questions I had, because I wasn’t clear on what exactly the thing was.

While Willy Wonka meets The Matrix is an easy description of the story, a closer comparison would probably be Willy Wonka meets The Goonies, as Wade and his friends are on a similar treasure hunt that requires them to obsess over the one responsible for the quest. In Goonies, that’s One-Eyed Willy, while in Ready Player One, it’s James Halliday. Wade is obsessed with Halliday as is much of the world at large, which is what forces all the 80s references into this film. Halliday was an 80s pop culture nut and for some reason, that means everyone in 2045 has to also be obsessed with 60-year-old songs, movies, video games, etc. Nostalgia is a nice thing that may get a reaction from an audience, because they recognize something that more closely connects them to the movie they’re watching. In this age of superhero films and re-launching old franchises like Star Wars, there are many opportunities to throw in familiar elements that connect on a nostalgic level, but in those situations, the nostalgic elements fit into those worlds, because they were created for those worlds or, in the case of superhero films, are callbacks to the original source material. With Ready Player One, though, all the references are random and create a kind of nostalgia pornography that turns out to be just a bunch of crap that’s supposed to make audiences clap simply because they recognize the reference, even though it has no impact on or relation to the story. Also, while it makes sense the characters would obsess over Halliday to win his challenges, it makes zero sense why people in 2045 would be attached to things like Back to the Future. Like the OASIS itself, the random references feel hollow and more like pandering to the audience. There are so many references hurled at the screen, I grew weary of them. In a film like Wreck-It-Ralph, where all the video game characters live in the same place when the games are shut down, it makes sense—here, not so much.

That’s not to say that everything is bad about Ready Player One. The cast is likable and there is some nice CGI throughout. There are some really nice sequences here and there—though I had no idea what the hell was going on in the race at the start. Everything blurred together. However, the story felt a bit like it had been done before. This isn’t helped by the fact that the major selling point of this thing is, “Hey, remember this thing from your childhood?” Everything in Ready Player One feels recycled and the characters aren’t strong enough to make me forget how familiar this all is. Yes, we see Wade’s living conditions and hear Art3mis’ sad story, but I felt no real connection to the characters—don’t get me started on how ridiculous it is that all these people that met on the Internet all happen to be in the same physical location.

Overall, Ready Player One is pretty to look at, but it’s ultimately hollow—a popcorn flick through and through. There’s a nice message about getting out an living life, but it’s tough to decipher over the other message which is, “Obsess over this dead guy and get rich.”