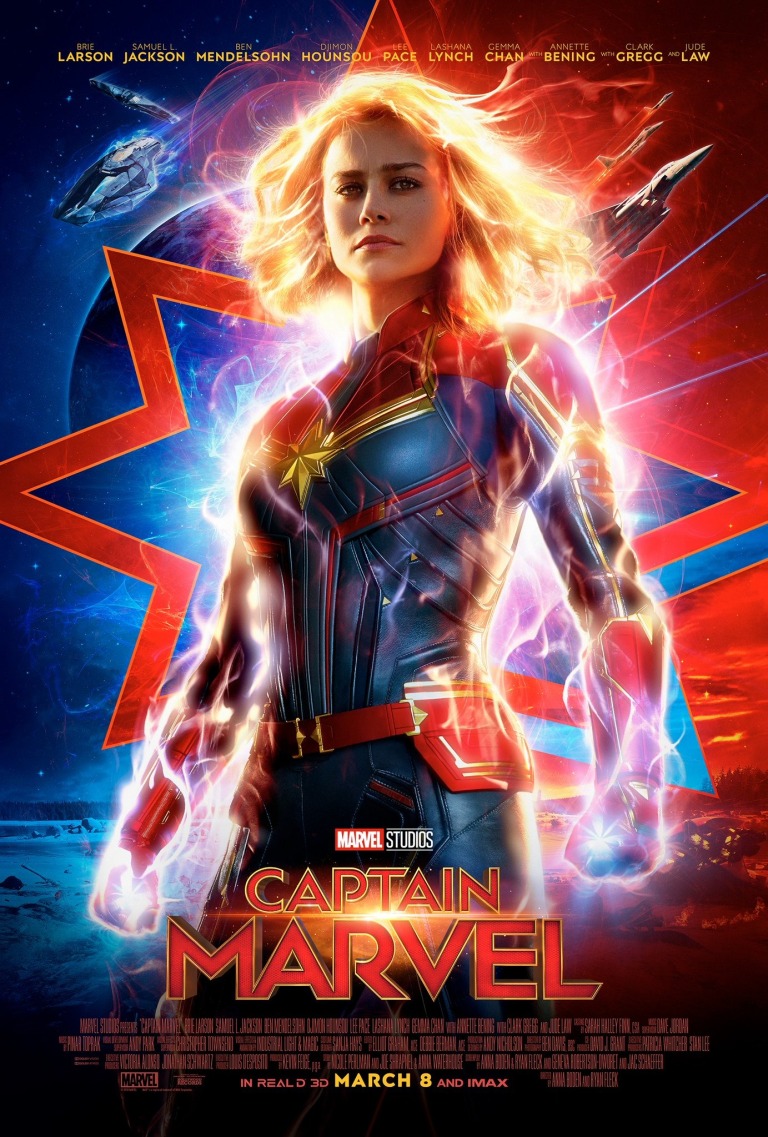 After over a decade and twenty-one films, Marvel finally delivers a film with a female headliner in Captain Marvel. Does the Captain soar high or crash to Earth in her first cinematic adventure?

Captain Marvel (Brie Larson) the character is great. Captain Marvel the movie is just good. The script is a little messy and it spends a lot of time setting up plot points for other Marvel films, which is probably my biggest gripe with the film. It’s a better than average Marvel origin film that does a great job of streamlining Captain Marvel’s convoluted origins from the source material. It also does a nice job of keeping the layperson up to speed with the comic book fans, as it changes a lot of what comic fans might have been expecting, which is refreshing—there are quite a few surprising twists for those who know the comics. Most importantly, though, much like Captain America: First Avenger, the film leaves the audience anticipating Captain Marvel’s future adventures more than celebrating her first film.

Captain Marvel really is a tale of two films, as much of the first half documents her cosmic life living as a Kree soldier in the middle of the Kree-Skrull War, the second half details her other life on Earth. The character is quite similar to DC’s Green Lantern, but believe me, Marvel makes a much more satisfying film, because aside from Ryan Reynolds and a few of the other characters, Green Lantern is straight garbage. As for the alien races mentioned above, the Kree—introduced in both Guardians of the Galaxy and Agents of SHIELD—have been warring with the shape-shifting Skrulls for what feels like eternity. So, that’s the backdrop that you need to understand as you go into the film: long-standing alien war and Captain Marvel is in the thick of it. The film gives you the broad strokes and that’s enough to get you through this story, but there is so much more that can be mined from this conflict. I hope that Marvel explores it later.

I kind of felt that given how important Captain Marvel is going to be to the future of the Marvel Cinematic Universe, they should have given her the same treatment that Black Panther received in that, she shows up in an ensemble movie first to get her introduction out of the way so that her first movie could be a great, great film. However, they decided to go the Captain America route and I have a feeling that the best is yet to come for Captain Marvel. Since the film is set in 1995, the filmmakers may have felt that putting the character in an ensemble first might not have worked, because it is in essence a prequel to almost every other Marvel film. An interesting way to go, but I hope we’re going to see more of the characters and relationships established in this film since it takes place almost twenty-five years ago. The film also reminded me a bit of Wonder Woman in that it’s a good film, but the character transcends the movie and is far more important in the overall scheme of things. Representation matters, people. If you want more heroines like Wonder Woman and Captain Marvel, go see their films—in the theater.

The cast really elevates the proceedings here. Brie Larson is fantastic as Captain Marvel. She really nails her steel and determination, while still being likable and relatable, which is tough when a character is as powerful as the good Captain. The chemistry between Larson and Sam Jackson is phenomenal and it stems from the fact that this is their second or third film together. Jackson, of course, reprises his role as Nick Fury, but a much younger Nick Fury than we’re used to. The de-aging effect they use on Jackson is pretty seamless and it never took me out of the movie. Clark Gregg’s effects work as Coulson was good too, but he’s not in the film nearly as much as he should be, so we don’t get as much of a sample size for the technology as we do with Jackson. Lashana Lynch does a stellar job as Captain Marvel’s best friend on Earth, Maria Rambeau and Akira Akbar is adorable as her daughter, Monica—yes, comic fans, you read that name right. I really wish I could have seen more of the family dynamic they form with Captain Marvel, and hopefully we’ll see more in the inevitable sequel. Jude Law is great as Captain Marvel’s mentor, Yon-Rogg, but that’s about all I can say about his character without delving into spoilers. Annette Bening gives a great performance as the Supreme Intelligence and in a common theme for many of the actors in this film, it would have been great to see her have more screen time. The same goes for Gemma Chan, who plays Minn-Erva—a character that is important in Captain Marvel lore, but is underused here. However, the actor that steals every scene he’s in is Ben Mendelsohn as Skrull leader Talos. His delivery is so light and breezy that he makes a great villain. Mendelsohn is a fantastic actor and it’s nice to see him finally get a blockbuster film role that he can sink his teeth into, as I felt he was wasted in both Rogue One and Ready Player One. And I would be remiss in not mentioning that you will absolutely fall in love with Goose the Cat.

The special effects are really good for the most part. Captain Marvel is the most powerful hero in the Marvel Cinematic Universe and the filmmakers did a nice job depicting her powers. There were a few wonky bits when Captain Marvel is flying, where Brie Larson clearly looks digital, but this is a problem that has cropped up in other movies as well where characters fly. The score by Pinar Toprak is very good, even if it hedges a little too close to Star Wars at certain moments, but if you’re going to pay homage Star Wars here and there, this is the movie to do it. Also, while the 90’s soundtrack is fun, maybe check the dates on songs to make sure that they fit within the context of the movie—there is one scene where the song fits, but there is no way Captain Marvel could know that song given the film’s timeline. Directors Anna Boden and Ryan Fleck do a decent job, but the end result feels very yeoman in nature. There definitely is not the same connection to the source material that Ryan Coogler had with Black Panther and it shows.

Overall, Captain Marvel is a solid entry into the Marvel Cinematic Universe that excels thanks to its fantastic cast. It’s a good, fun film that leaves the door wide open to future, more compelling adventures and I for one, can’t wait.