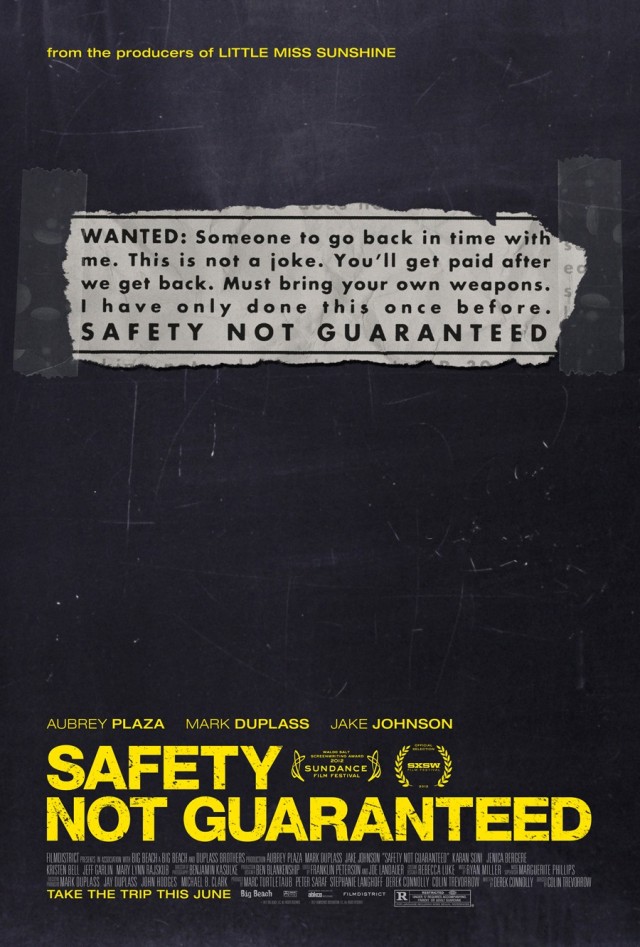 I’ve been trying to make an effort and catch up on some movies I missed on the first go-around when they were in theaters. So, with that in mind, I finally gave Director Colin Trevorrow’s Safety Not Guaranteed a spin. I’m glad I did.

The story centers on Darius (Aubrey Plaza), an intern at a Seattle magazine who is worried about her future. She’s also fixated on the past and the death of her mother when she was just a girl. At a story meeting, staff reporter Jeff (Jake Johnson) puts forward a story about a person in Ocean View, Washington who put in a classified ad seeking a time-traveling companion, “safety not guaranteed.” Bridget (Mary Lynn Rajskub), the magazine editor, agrees to let Jeff pursue the story and he takes Darius as well as another intern, Arnau (Karan Soni) with him to check it out. Unfortunately, Jeff’s reasons for investigating this story are not completely on the up and up and it falls to Darius to take the initiative and get the answers from the alleged time-traveler, Kenneth (Mark Duplass). Is Kenneth just nuts or is there something to his story after all? Darius aims to find out and she may find some answers to her own issues in the process.

The film is both hilarious and sweet at the same time. I just loved the interactions between all the characters. Plaza and Duplass have great chemistry and Johnson demonstrates his knack for comedy, but also shows a vulnerability that might not show up in a bigger budget comedy. It’s just a lot of fun and it’s always great to watch a movie with heart, which Safety Not Guaranteed has in spades. You’ll laugh at some of the crazier ideas Kenneth has, while worrying if Darius should be spending as much time with him as she does. The film does a great job of laying breadcrumbs and keeping you guessing right up to the end, which is a credit to screenwriter Derek Connolly—both Connolly and Trevorrow are now working on Jurassic World for Universal.

Plaza is fantastic in this film and while I love her in the indie films she does outside of Parks and Recreation, I’m just waiting for her big budget comedy break. She’s not for everyone, of course. If you aren’t a fan of sarcasm, Aubrey Plaza probably isn’t going to be your favorite actress, but I think she’s great. Duplass is also completely committed here. He goes into his role all the way and holds nothing back. Johnson is great here too and is also one of those actors who seems on the verge of something big. Unfortunately, according to Dirty A, it won’t be Let’s Be Cops. Jeff Garlin also puts in a nice appearance as Darius’ father.

Overall, Safety Not Guaranteed is definitely worth your time. Even if indie films aren’t your thing, you’ll probably enjoy this one. It’s smart, funny, and has a lot of heart. In a landscape of bigger budget films that have none of these things, it’s a refreshing tonic. Check it out.

Safety Not Guaranteed is now available on Netflix Streaming