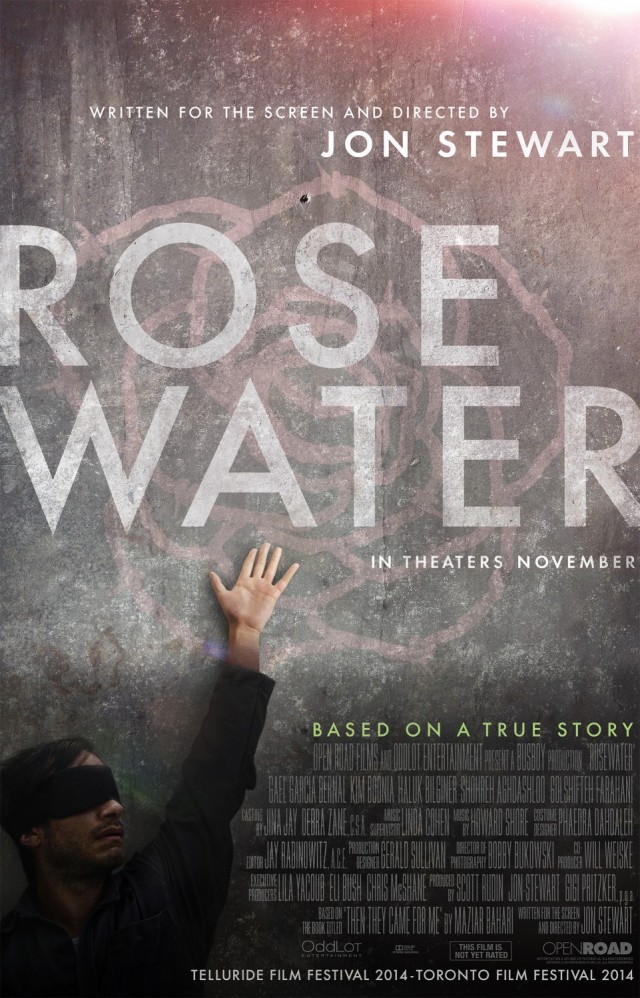 Rosewater is the first feature film written and directed by The Daily Show’s Jon Stewart. And while there are several humorous moments, this is far from a comedy. However, is it an engaging story?

The answer is yes and no. The film focuses on Iranian-Canadian journalist Maziar Bahari (Gael García Bernal), who goes to Iran to cover the elections in 2009. He befriends some anti-establishment activists and then participates in a sketch for The Daily Show, all of which is used against him when he is arrested by the Iranian government as a suspected spy. The film tells a bit about Bahari’s family history and his activist father (Haluk Bilginer) and sister (Golshifteh Farahani), both of whom he hallucinates while in solitary confinement. His interrogator (Kim Bodnia) is distinguished by the scent of rosewater and it is mentioned at the start how Bahari used to associate the scent with good things, but no longer. Bahari is to be made an example of, but he resists his captors.

The problem with Rosewater is that Bahari’s story is well-documented and it robs the film of any real suspense. He’s the only one in danger although his mother (Shohreh Aghdashloo) lives in Iran and his captors constantly make reference to the fact that he’ll never see his wife (Claire Foy) and unborn child again. However, it is stated early on that Bahari is not to be hit in the face or hurt badly because he needs to be on TV as a propaganda tool. They definitely torture him psychologically, but he seems to overcome it. I never got the feeling that they were truly breaking him. So, when you know how it all turns out, it robs the story of impact. I almost would have preferred Stewart tell the story of Bahari’s anti-regime friend, Davood (Dimitri Leonidas), whose fate we never learn.

One thing that Stewart does excellently is showing how absurd Bahari’s situation is. Though he is being held captive, his jailors are incredibly inept. They ask him ridiculous questions and Bahari even toys with them at one point, making them think he is cooperating. These are the most entertaining moments in the film and I would have liked to have seen more of this, but since the story is pulled from Bahari’s memoir, Stewart only has so much leeway.

The cast does a great job here. Bernal is fantastic, capturing all the different facets of Bahari’s life. He shows the love, pain, despair, and joy Bahari experiences during his ordeal. Leonidas is extremely likable as Davood and I would have liked to have seen more of him. Bodnia is both sinister and hilarious in his role as the interrogator. But again, you never really feel that Bahari is in danger. That’s not Bodnia’s fault, though.

Overall, Rosewater is a solid film and a nice first effort for Jon Stewart. The story is definitely interesting, but not entirely engaging. I found myself hating the Iranians for confining Bahari without cause, but the absurdity of their actions made them weaker as villains of the piece. It’s worth a watch, but there are definitely better films out there right now.