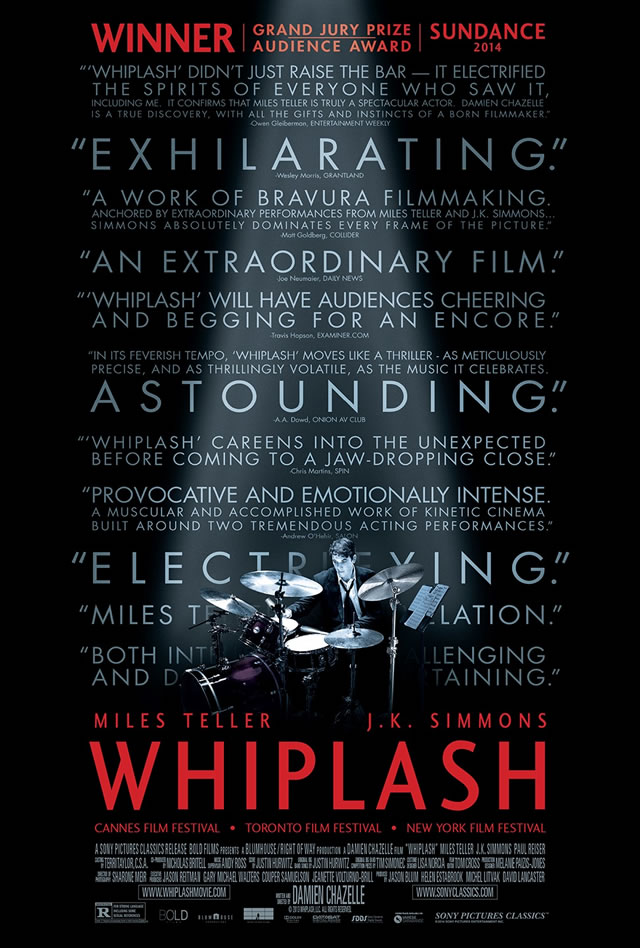 Ever since it hit the festival circuit earlier this year, I’ve heard nothing but good things about Writer-Director Damien Chazelle’s Whiplash. Even the poster is heaped with quotes of praise from various critics. The question is, does the film live up to the hype? Yes, and then some. In fact, Whiplash may just be the best film of the year.

Andrew Neiman (Miles Teller) is an aspiring jazz drummer at a prestigious music academy. While practicing his drumming one day, he is visited by the school’s most respected instructor, Terrence Fletcher (J.K. Simmons). After feeling that he failed to impress the teacher, Andrew is invited to join Fletcher’s studio jazz band that plays in competitions and is the crème de la crème at the school. What Andrew discovers is that Fletcher is an unforgiving taskmaster who often resorts to bullying and insulting his students in an attempt to get the results he wants. What develops is a battle of wills between Andrew, who hopes to be one of the “greats,” and Fletcher, who will stop at nothing to see his vision fulfilled.

It sounds like a very non-descript film, but Whiplash is intense. I was riveted to the screen the entire time. It’s a very interesting film in that the conflict between Fletcher and Andrew drives the film, but there is also a thread in there of self-discovery as Andrew strives to figure out what makes a musician great. I don’t want to go into too much detail because I don’t want to spoil all the ways Fletcher tortures not only Andrew, but the other musicians as well. The guy is absolutely merciless. The music is also fantastic as well, which makes sense considering the subject matter and setting. The film’s title is taken from the musical piece “Whiplash” composed by Hank Levy and I’ve had that on repeat more than a few times since I saw the film. It’s just a dynamic soundtrack.

My only minor complaint with the film is that I wanted to see a little more depth in the romantic subplot between Andrew and Nicole (Melissa Benoist), a college student who works at the movie theater Andrew goes to with his father (Paul Reiser). There isn’t much meat there and Nicole really only serves as a plot device to show the lengths that Andrew will go to be one of the best. However, his sacrifice when it comes to her doesn’t seem that great, because we’re never really given a specific length to their relationship. Andrew is a loner and finds it hard to meet people, so the fact that he asks Nicole out at all is a victory, but I think it might have worked better if they had been high school sweethearts and he chooses the music over her. We could have seen her for the same amount of screen time, but that one wrinkle in the narrative would have said volumes.

The supporting cast does an excellent job here—let’s hear it for a Paul Reiser sighting!—but the film truly belongs to Teller and Simmons. I don’t know how much of the actual drumming Teller performed on this film—if any—but his performance is great beyond the spectacular drumming. I’ve enjoyed Teller in his last few roles that I’ve seen and look forward to seeing him in more films, but I still think he’s wrong for Reed Richards in Fox’s upcoming Fantastic Four reboot. After years as a solid character actor and supporting cast member, Simmons finally has his breakthrough with Whiplash. He is a fantastic villain and you can’t take your eyes off of him. The intensity he brings to his performance is unmatched. He was really scary as Vern Schillinger on Oz, but he’s played so many nice and funny characters since then, people have forgotten. Whiplash will remind them what a sadist J.K. Simmons can be—and that’s a high compliment.

Aside from my minor quibble, I absolutely loved Whiplash. As of right now, it’s at the top of my list for year’s best and you should really see it if it’s in your area. Just a really well-made film with fantastic lead performances. If Simmons isn’t nominated for an Oscar, I’ll be shocked. Highly, highly recommended.