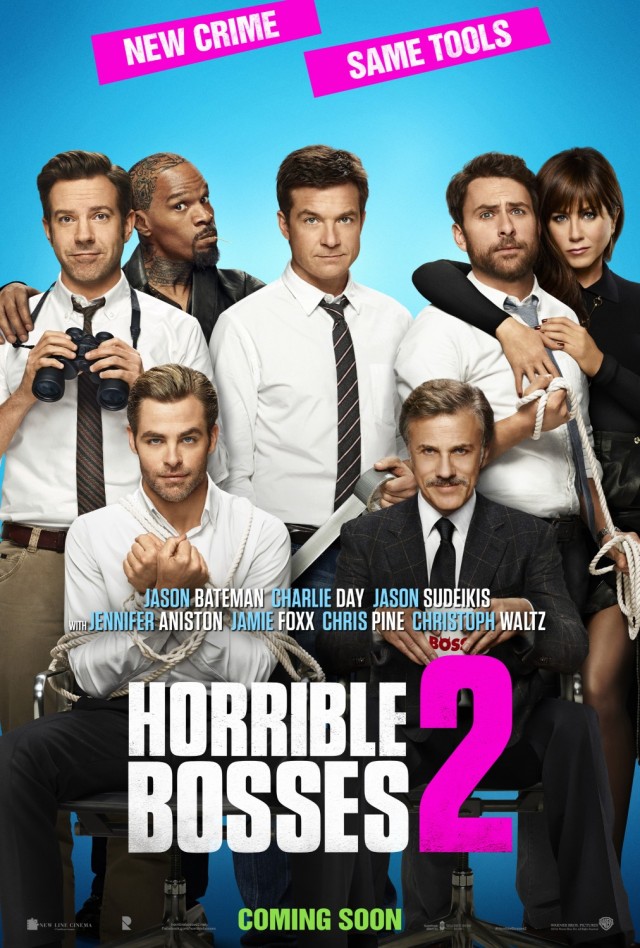 In 2011, Horrible Bosses was released to the tune of over $100 million at the box office. So, a sequel was inevitable. The first movie was pretty funny, but for me, the premise was flawed. I mean, three disgruntled employees immediately jump to murder to solve their HR problems. Comedy sequels usually suck. Would Horrible Bosses 2 do any better?

The short answer is: yes. Horrible Bosses 2 is at least as funny as the original, with a plot that is a little more reasonable than instant murder. Our three protagonists from the first film, Nick (Jason Bateman), Kurt (Jason Sudeikis), and Dale (Charlie Day), have decided to go into business for themselves by creating an all-in-one shower device called the “Shower Buddy.” They are approached by Bert Hanson (Christoph Waltz), an executive of a Skymall-type retailer, and his son, Rex (Chris Pine). Hanson wants to be the exclusive distributor of the “Shower Buddy” and cuts a deal with the three guys. Predictably, the slick businessman swindles the boys and they are on the verge of losing their business. They decide to get even and plot to kidnap and ransom Rex. As usual, though, they screw it up, but the twist is that Rex wants to join them in their plot in an effort to stick it to his father. Hilarity ensues.

Many of the gags in Horrible Bosses 2 are predictable, but hilarious nonetheless. Jennifer Aniston and Jamie Foxx return and put in very funny performances, while Kevin Spacey is also back with a humorous cameo. The best part about the film, though, is the premise. The kidnapping plot is much more feasible than a triple homicide and ripe for comedic opportunities. I’m all for dark comedies, but the first film didn’t go far enough with the premise. The sequel is a bit lighter in its approach and suits the performers better.

Overall, Horrible Bosses 2 was an enjoyable time at the theater. Thought the comedy telegraphs its punches at times, it’s still hilarious. I don’t necessarily want to see Horrible Bosses 3, but I’d like to see Bateman, Sudeikis, and Day work together again some day. If you want a good laugh, check it out.