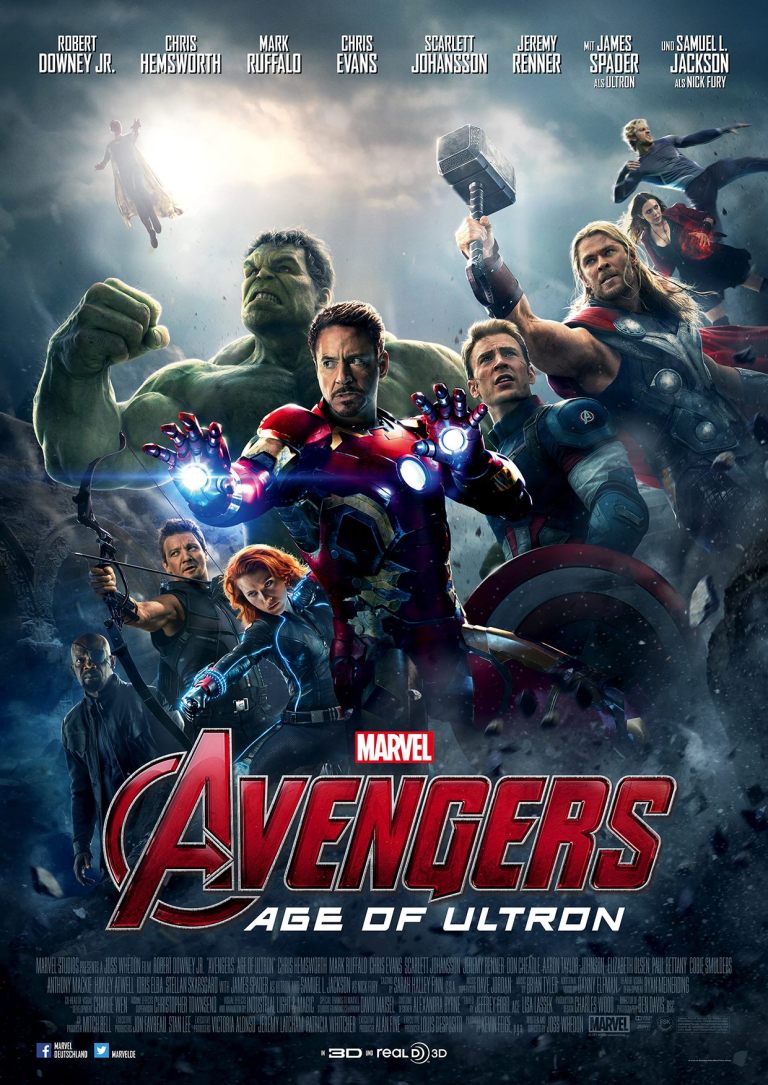 The Summer Movie Season has begun and The Avengers are back! Is Age of Ultron the best Marvel movie yet or just another cog in the Marvel Machine?

Well, the answer is actually a little from Column A and a little from Column B. Age of Ultron is not the best of the Marvel films, but it is far from the worst. It is a very good entry in the series, but it makes me worry about future installments. Why is that, you ask? Because even though this film clocks in at 141 minutes, it still feels like everything is very rushed. Writer-Director Joss Whedon wanted to further develop his core Avengers – particularly Black Widow (Scarlett Johansson), Hawkeye (Jeremy Renner), and Hulk (Mark Ruffalo) – while introducing three new characters – Scarlet Witch (Elizabeth Olsen), Quicksilver (Aaron Taylor-Johnson), and Vision (Paul Bettany) – oh, and if we can squeeze some development of our villain, Ultron (James Spader), in there, that would be great too. But don’t forget to set up the nine other films Marvel has already announced, ‘kay thanks. There’s just too much going on to keep it confined to a film under three hours, but I applaud Whedon for his efforts because he did the best that anyone could do under the circumstances. It’s also clear after seeing the film why Whedon has announced he’s stepping away from Marvel movies for a while. To pull this thing off, he must be completely exhausted. I don’t envy the Russo Brothers, who will be directing Captain America: Civil War as well as the two-part Avengers: Infinity War, but at least they’re two guys instead of one and they even have help in the writing department. Whedon pulled all this off by himself, so kudos to him. So, let’s get to the review, but beware, there will be SPOILERS THROUGHOUT.

The movie begins, honestly, with the greatest example of synergy yet in this connected Marvel Universe. We catch up with the Avengers mid-mission to retrieve Loki’s staff from the previous film. You want to know how they got the intel on where it would be? Better watch last week’s Agents of SHIELD. It was quite impressive how effortless the episode of the television show flowed into the new film. So, the Avengers are looking for Baron von Struker (Thomas Kretschmann), as he has been using the staff to experiment on people to try and give them powers. His two prize pupils are “The Twins,” Pietro and Wanda Maximoff, or as we come to know them, Quicksilver and Scarlet Witch – please don’t call them “Mutants.” After a battle sequence that made my eyes roll in my head because the editing was so quick it gave me whiplash, the Avengers win the day, but the audience gets to see a taste of Wanda’s power as she makes Tony Stark (Robert Downey Jr.) see his worst fear: The Avengers dead and him unable to help. That fear powers the rest of the film as Tony discovers that within the staff is something akin to a super intelligence. He begins to plan to put his Ultron plan into effect – an Artificial Intelligence that would control robots to protect the world when the Avengers can’t or to take over from them entirely. Of course, once Tony initiates his scheme, it immediately goes sour as Ultron deems that the problem with Earth is humanity itself. So, free from his shackles, Ultron sets out to fix the Earth his way. He recruits the Twins and uses them to destroy the Avengers from within, but it’s not nearly as cool as it sounds, but it does lead to the much-teased Iron Man/Hulk fight. While Ultron’s plans unfurl, he’s also busy creating the being that will inherit the Earth, Vision – a sort of living android. The Avengers must overcome their doubts and differences to come together and stop this world threat.

The story is certainly big enough for the Avengers to tackle, but not for a single film. All the narrative elements either feel rushed or kind of shoehorned into the film. There is a romantic subplot between Black Widow and the Hulk that kind of comes out of nowhere and felt like it was inserted just to give Black Widow something to do. Contrast that with the instant connection between Scarlet Witch and the Vision, which felt natural and organic as it flowed out of the story. We learn much more than we ever thought we would about Hawkeye, but I don’t know if that was a good or bad thing. The life he lives outside the Avengers seemed about right for Jeremy Renner, but having read Matt Fraction’s great Hawkeye comic book series, I know it’s not Hawkeye’s life. All this rushed storytelling also shortchanges all of our new characters, especially Ultron. He’s an enjoyable villain with a pretty nasty plot – very comic-booky, which was nice – but while we get hints of dimensions within him, they’re really glossed over. One of the less interesting things about the story was how as soon as Ultron was turned on, he immediately broke bad. There was no time where he was good, learned to resent humanity, and then turned against them. Of course, in order to do that plot, Ultron would have had to have been pretty much the only new character. I liked the Twins, but they are also underserved by the story – they blame Tony Stark and his weapons for the deaths of their parents. The Vision was one of the best parts of the film, but again, his final creation left a lot to be desired, as in, Tony Stark didn’t learn his lesson with Ultron, so he goes and does the same thing he did 90 minutes previously. I know comic book characters don’t change much, but that was tough to swallow. And, as mentioned previously, some of the editing in the action scenes was atrocious. I found myself not being able to follow what was going on because the cuts were so quick. Thank God I didn’t see this in 3D.

All gripes aside, Age of Ultron is a really fun film overall. The giddy excitement of seeing these characters all together is gone, but it is replaced with the joy of seeing them interact as a team that has been working together for some time. This was never really established in the X-Men films over at Fox because each of the first three came right after the other narratively with almost no time passing in between them, so kudos to Whedon and Marvel for that aspect of the film. The tone is much darker than the first film, but Whedon keeps things light with his trademarked humor. I will say, though, that his overly quippy script did get on my nerves here and there. I know that’s his thing, and he does it well, but I also think he needs to learn a little restraint. I’m also not sure if this is a good movie for kids. The dark tone is accompanied by more adult themes that may leave kids bored or asking you questions about what “sterile” means.

The cast is great as always with the actors really inhabiting these roles. It’s going to be tough for Marvel to replace these people when the time comes to recast. Though Whedon keeps the focus on the Avengers without their own solo films, Captain America (Chris Evans) and Thor (Chris Hemsworth) really shine during their screen time. As I watched the film, I thought about how Thor could probably take care of any brute force problem on his own since he has comparable strength to the Hulk, but a mind to use it. That’s probably why they shunt him away in the middle of the film to set up future entries in the franchise. Captain America, as I said in my review of the first Avengers film, just does not quit. No matter the odds, he keeps going and Evans does a good job being the “adult” of the team. Paul Bettany is great as Vision. I was happy to see that he was actually on set with the other actors and not a completely CGI character. He’s a fantastic addition to the series and I can’t wait to see more of him as he is far more important to the story than anyone realizes. Olsen and Taylor-Johnson are also good additions, but of the two, Olsen is the most desperately needed – the Avengers need some gender balance, stat. Spader is great as Ultron and if comic purists are concerned that he doesn’t speak like they expect Ultron to speak, Whedon explains that away very easily early on and it works.

Overall, Avengers: Age of Ultron is a blast. Fans of the franchise will enjoy it, but don’t be disappointed if some elements stick in your craw at the end – if they’d made this one perfect, where do they go from there? It’s becoming apparent that these movies are much more like comic books or episodic TV than ever and we as an audience will have to deal with stories feeling incomplete and some overstuffing of films as the Marvel machine rolls on into the future.