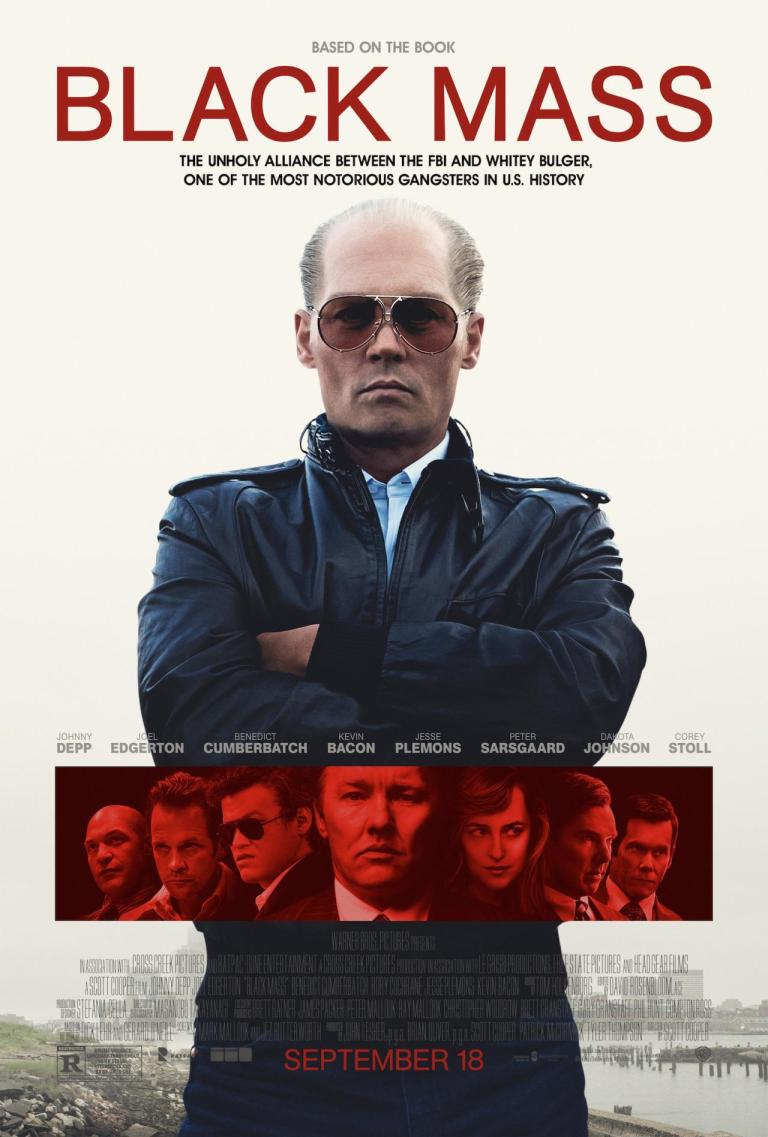 Director Scott Cooper’s Black Mass tells the unbelievably true story of Boston mobster James “Whitey” Bulger. It features great performances from its cast, but is the film, as a whole, sound?

James “Whitey” Bulger (Johnny Depp) was a notorious and sociopathic small-time gangster in Boston’s South End in the late seventies. He was in conflict with the Italian Mafia that was trying to horn in on his territory. So when his childhood friend and newly-minted FBI agent John Connolly (Joel Edgerton) makes overtures about Bulger becoming a federal informant in order to take down the Mafia, the gangster jumps at the chance. The FBI has stipulations to attempt to limit Bulger’s criminal activities, but they’re worth less than nothing. Connolly is intent on making his name and using his old buddy to do it, while Bulger is intent on letting the FBI crush his enemies for him. The film documents Bulger’s rise in power as well as Connolly’s as the information Bulger supplies helps propel him through the ranks of the FBI. Ultimately, Bulger’s status as an informant gets out and his world comes crashing around him as he has to go on the run.

Black Mass is definitely an engaging film, most of which comes from Depp’s magnetic performance as Bulger. He’s a larger than life character and it was crazy to see how brazen he became—killing people in broad daylight—but of course, that’s what brought him down in the end. He thought he was invincible. However, the problem with the film lies in the fact that it doesn’t really delve into any of the characters to any degree. All we really get is a sequence of events that tells a story to be sure, but we never learn the why of things. This is because we don’t really have a point of view character to tell us the story. There is a framing device Cooper uses in the form of Bulger’s former mates informing on him, but it doesn’t gain the audience any insight into any of the characters’ motivations or thinking as events happen around them. Yes, Connolly saw Bulger as a childhood hero and wanted to be in with his gang, but we never see why he’s still going to bat for Bulger with the FBI when Whitey is so obviously using him. There are speeches about loyalty, but I’m not loyal enough to anyone to flush my life down the toilet just so he can get away with murder—literally. So we never really understand why Connolly lets Bulger run roughshod all over him and his agency.

There are better ways to tell this story. Take Goodfellas, for example. Scorsese’s crime epic told the story of a particular guy, Henry Hill (Ray Liotta), and let him narrate the story. Now, we also got other characters’ point of view, but the main story was Hill’s. Scorsese also used this device in Casino to great effect. With Black Mass, there’s no real arc for Bulger. He’s clearly brilliant, but at his core, he’s a murderer and a thug and we never see him as much more than that. We don’t really get into his head at all. This seems to be a current trend with “True Story” films in that the producers make sure that their facts are unimpeachable, but they forget how to tell a really good story. Black Mass feels like a bunch of jailhouse confessions from Bulger’s cronies all strung together to paint a picture, but there’s no narrative flow to it. There are some dates thrown in to ground the viewer, but those disappear halfway through the film and when the final date was revealed at the end, I hadn’t realized just how much time had passed in the tale. Also, while a film like this definitely needs levity, I felt that a few of the scenes were a little too humorous. Bulger was a straight-up psychopath and some of the scenes he’s involved with were played for laughs, which struck an odd tone.

All that being said, the cast does stellar work here. Depp is unrecognizable as Bulger. His ice blue contact lenses give the actor a completely different look than we are used to seeing from him. Honestly, he reminded me of Ray Liotta when I tried to place why Depp’s look was so familiar to me. He does great work here, even if the screenplay doesn’t allow him to show all sides of Bulger. Edgerton also does a fine job here as Connolly, but like with Depp, we never get into his head to see how he really felt about aligning himself with such a despicable man. Maybe the story presented is totally accurate and Connolly had no qualms at all with what Bulger did as long he found success as well, but somehow, I can’t believe that. Benedict Cumberbatch does well as Bulger’s State Senator brother, Billy and Peter Sarsgaard gives a twitchy performance as Bulger associate Brian Halloran. Rory Cochrane, Jesse Plemons, and W. Earl Brown all put in great work as Bulger’s crew—and the guys who snitch on him while in prison—and Julianne Nicholson has a great, creepy scene with Depp, but is ultimately underused as Connolly’s wife. David Harbour plays Connolly’s conflicted colleague John Morris very well and Kevin Bacon and Adam Scott are good as fellow FBI agents.

Overall, Black Mass is a basic retelling of the events of Whitey Bulger’s story, but it’s all surface work for the most part. The story plays out and you marvel or recoil at Bulger’s actions and that’s about it. It’s a decent mob tale with Depp’s transformation making it better than it probably is.