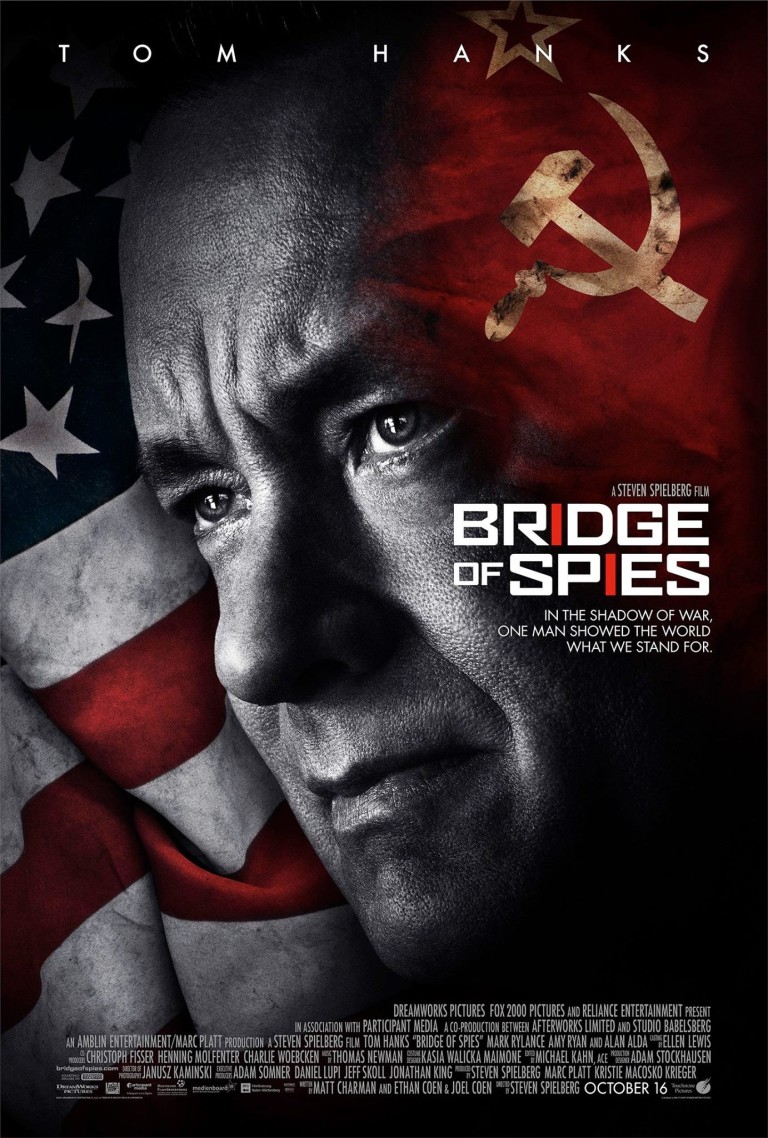 Director Steven Spielberg and Tom Hanks team together for the fourth time with Bridge of Spies, a historical pic set during the Cold War. Is this their greatest collaboration yet?

It’s 1957 and Jim Donovan (Hanks) is an insurance lawyer who is tapped to defend Rudolph Abel (Mark Rylance), a Russian spy who has been arrested by the FBI. No one in America’s legal system wants to see Abel get a real fair shake in his trial, except Donovan, who goes against the wishes of his boss, Thomas Watters (Alan Alda), and argues an appeal for Abel after he loses his trial. Many people do not see things Donovan’s way and both he and his family are threatened by disgruntled Americans who feel he is trying to defend a “traitor.” Meanwhile, several pilots are recruited by the CIA to begin flying spy missions over Russia. One pilot, Francis Gary Powers (Austin Stowell) is shot down and captured by the Soviets. Donovan receives an odd letter from Abel’s wife in Russia, but Abel claims it is not authentic. The CIA comes calling and points out to Donovan that the false letter is a backchannel overture from the Soviets for a prisoner exchange. The CIA hatches a plan to use Donovan as a go-between with the Soviets in order to get their pilot back. The exchange will take place in Berlin. However, a complication arises when an American student, Frederic Pryor (Will Rogers), is wrongfully arrested on the wrong side of the Berlin Wall. The CIA wants only to get Powers back, but Donovan concocts his own strategy to try and get Powers and Pryor back. Will Donovan succeed or will he himself become victim to the posturing of two superpowers?

Bridge of Spies is a solid historical film. It has all the elements that make a good film—great direction, good cinematography, a solid script (co-written by the Coen Brothers, no less), and an excellent cast. However, I found myself enjoying the film more as a history lesson and less as a story. I didn’t know the story of Jim Donovan prior to seeing the film, so I had no idea where the plot was going to go, but at the same time, I never really felt that Donovan was in any real danger. I kind of trusted that the whole thing would work out in the end. So the history buff in me loved the film, but the storyteller in me felt a little cheated. This may have also had to do with the fact that the film’s trailers had no idea how to sell this thing. I’d never want to accuse a Steven Spielberg film of a bait-and-switch, but the trailers paint the film as a real Cold War thriller, when that’s not what we get in the slightest. It really is just a simple cut and dried historical pic that tells its story and moves along. The first half is one hundred percent a legal drama, while the second half is a warmed over spy film. It’s not Spielberg’s best nor is it his worst. It’s just a good film that the majority of filmgoers will probably really like.

The most shocking thing to me about this film was how many production companies were involved in making it. Seeing all their title graphics made me think back to Spielberg’s recent comments about superhero tentpole films and how difficult it is for even Steven Freakin’ Spielberg to get a film made. The guy is only one of the greatest film directors of all-time and a living legend. It was sad to see all those production companies listed when it should have been only Dreamworks and Touchstone (a division of Disney). Crazy.

Back to the film, the cast is beyond excellent here with Hanks doing a phenomenal job as Donovan. When you look back at how Hanks started in the business, it really is amazing the career he’s had. He makes Donovan a likable point of view character throughout the film and really brings the audience into this shadow world of spies and global politics. Rylance is also excellent as Abel. He has a few funny moments in the film and you find yourself really sympathizing with him, especially with the way Donovan argues his case. I also enjoyed Mikhail Gorevoy as Schischkin, the KGB operative whom Donovan deals with and Scott Shepherd as Donovan’s CIA handler, Hoffman. Amy Ryan and Alan Alda also turn in nice performances, but are not in the film much as the majority of the action takes place in Europe.

Overall, Bridge of Spies is a good solid film that tells an interesting part of history from the Cold War. Hanks is great as usual and those seeking a decent time at the movie theater will enjoy it. Some are calling this film Spielberg’s best film since Saving Private Ryan, but those people never saw Catch Me if You Can, Munich, Lincoln, etc.