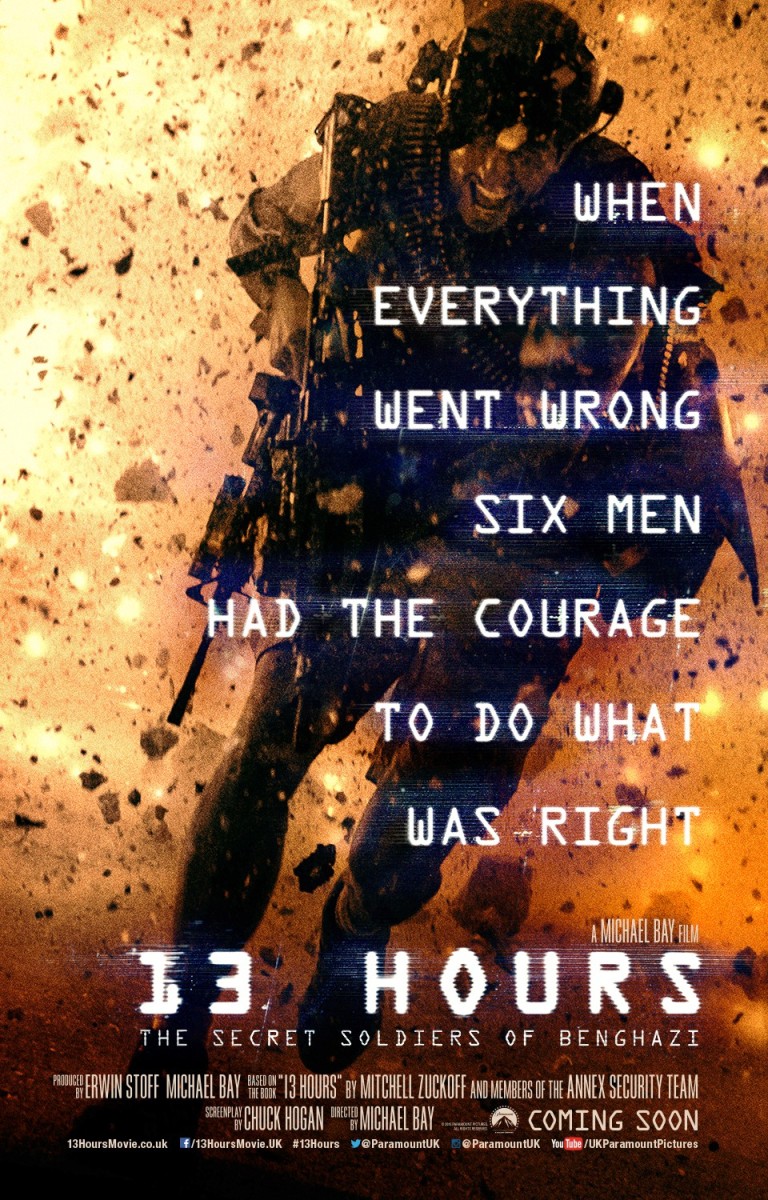 Michael Bay. His name alone usually elicits disdain from critics and moviegoers alike. So, when the trailers surfaced for the director’s latest film, 13 Hours, it was easy to write it off as his latest masturbatory military and explosion fest. But what if it wasn’t that? What if it was actually…good?The film centers on the men of Global Response Staff, a private military contractor, that were stationed in Benghazi, Libya in 2012. The men of GRS were tasked to defend a CIA outpost less than a mile away from a Special Mission Embassy. The story picks up with the arrival of Jack Silva (John Krasinski) to the GRS team, which is led by Tyrone “Rone” Woods (James Badge Dale). The rest of the team includes Kris “Tanto” Paronto (Pablo Schreiber), Dave “Boon” Benton (David Denman), John “Tig” Tiegen (Dominic Fumusa), and Mark “Oz” Geist (Max Martini). During Jack’s time in Benghazi, the team grows into a close-knit unit and as his tour is coming to an end, it is announced that U.S. Ambassador Chris Stevens (Matt Letscher) is going to visit Benghazi, despite the threat level being “critical.” When militants attack the embassy, the men of GRS must decide whether to help with the defense or follow the order of their CIA station chief (David Costabile) and remain at the CIA station and defend that from any blow back.

13 Hours is, surprisingly, not overly rah-rah in its depiction of the military – or in this case, ex-military. It celebrates the former soldiers’ commitment and courage, but doesn’t feel fawning. Of course, as is usually the case in “based on true events” films like this, the character development is a little light. We only get a minor detail or two to tell all these guys apart. The actors’ personalities really carry the day and make the characters likable. The action is realistic, well done, and brutal. The film depicts just how fucked up the situation in Benghazi was and how it seems like everyone dropped the ball. However, the bureaucrats, especially the CIA station chief, all come off as cartoonishly incompetent, which borders on unbelievable.

The cast does a fine job here with Krasinski and Dale leading the way. Like I said, it is really the actors’ charisma that makes these characters likable, because we know next to nothing about all of them. I think the focus here was more on what the men did over who they were, but one could argue that their response to the attack showed who they really were anyway. Plus, Bay seems to want to keep the camera on what he does best, which is action. That’s why the bulk of the nearly two and a half hour film is taken up by the attack on the embassy and subsequently, the CIA station. However, some quiet Saving Private Ryan moments would have been nice to get a little more background on these guys. It was still nice to see Jim and Roy meet again, though.

Overall, 13 Hours is not a great film by any stretch of the imagination, but it may just be Michael Bay’s best. I’ve never been a big fan of the guy, but when I was watching this film, I forgot he was the one directing it, as many of his signature touches were nowhere in sight. The action is solid and I liked how it wasn’t overtly political – you can probably see whatever you want in the final product, though. Take a look at this one. It’s not the Michael Bay film you’re expecting.