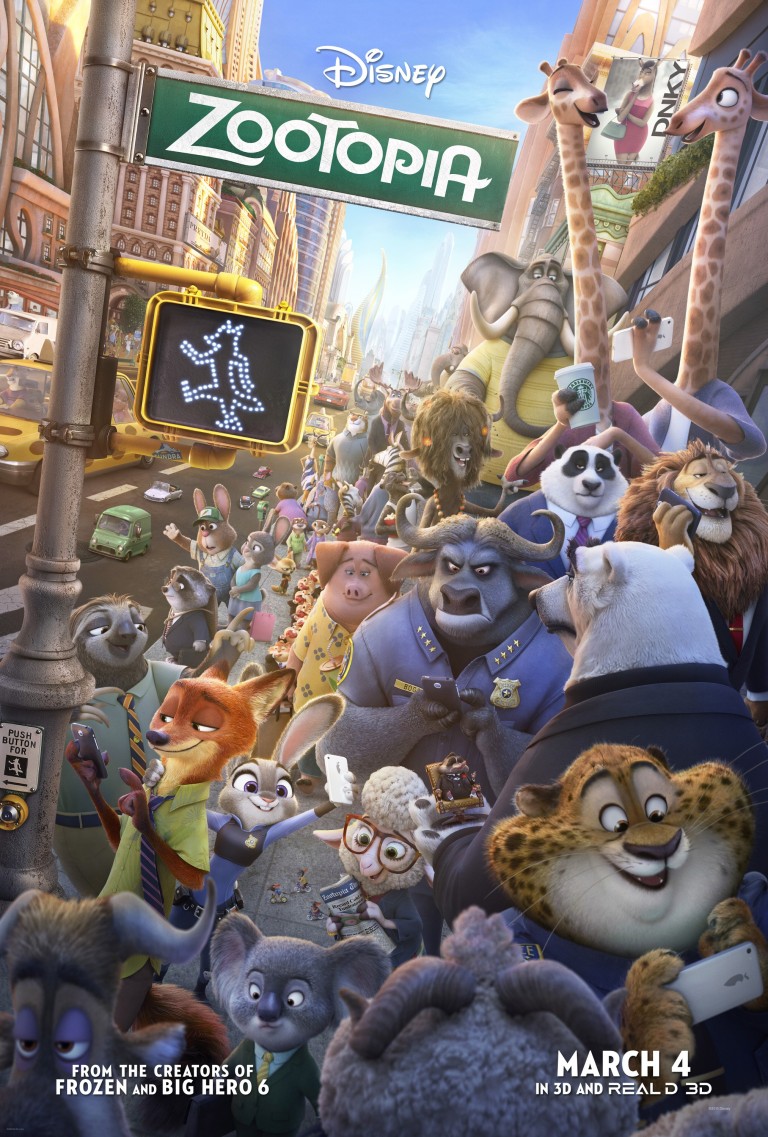 Recently, Disney has been proving that they don’t necessarily need Pixar around in order to craft topnotch animated features. I’ll always take a Pixar offering over Disney, but that may be changing with Zootopia.The story centers on Judy Hopps (Ginnifer Goodwin), a farm bunny who wants to grow up and become the first bunny police officer in Zootopia, the great animal city where mammals of all shapes and sizes live in harmony, except when there’s crime. As the film explains at the start, predators and prey have evolved to the point where they can co-exist with one another peacefully, hence, Zootopia. Despite the warnings of her protective parents (Don Lake & Bonnie Hunt), Judy heads to the police academy and graduates at the top of her class. She is sent to the big city where all the cops are big animals. In the midst of a rash of missing animals, Judy’s boss, Chief Bogo (Idris Elba), assigns her to parking duty. Judy wants to make her mark as a cop, while Bogo just wants her to go away and sees her as a publicity stunt for Mayor Lionheart (J.K. Simmons) and his assistant, Bellweather (Jenny Slate). However, when Judy makes the acquaintance of slick con man Nick Wilde (Jason Bateman), and discovers that he was a witness in the missing persons case, she is thrown headlong into a mystery that could destroy Zootopia.

There is a ton to like about Zootopia. It’s funny enough for adults to be entertained and cute enough to keep the kids engaged. What co-Directors Byron Howard, Rich Moore, and Jared Bush have created here is a kiddie noir combined with a buddy cop film. The film is very funny with highly likable characters, but it also has eight credited writers on it and all those cooks in the kitchen show in a few key scenes. The biggest problem for me, and what kept Zootopia from being an instant classic, was a major plot hole as we enter the third act. I don’t want to give everything away, but let’s just say that at some point, Judy stumbles upon a huge lead and then proceeds to…not tell the cops. She just runs off on her own into God knows what to crack the case. It felt like an homage to L.A. Confidential in that she thought the crime was solved, but something didn’t fit. Of course, L.A. Confidential handles that plot twist far better than Zootopia. The film is still very well-crafted, but that major plot hole rankled me. Also, some of the internal logic of the world the filmmakers create doesn’t make much sense. I like how the city is divided up into different temperate zones to accommodate all the different animals, but if all the cops are big, burly animals, who patrols Rodent Town? Things like that that are cute when first seeing them, but then after thinking a bit about it, you start to think, “Hey, that really didn’t make much sense.”

On top of the cop story, Zootopia is also a great lesson for kids to learn “don’t judge a book by its cover.” There is a very strong undercurrent of anti-racism running through the film and while that is definitely a fantastic message for kids, it felt a little too heavy-handed as an adult viewer. By the end, I was almost saying, “We know, we get it.” However, the hilarious homage to The Godfather more than makes up for it.

All the voices cast are perfectly suited to their characters, as is usually the case in Disney cartoons. Goodwin brings a lot of spunk and can-do attitude to Judy, while Bateman is absolutely perfect as Nick the sly fox. Originally, Bateman’s character had been intended to be the main character of the film, but the story was rejiggered and he became more of a supporting character to Judy’s story. The chemistry between the two works well and I wouldn’t mind seeing a sequel featuring the two of them. Elba is really good as the no-nonsense police chief, but probably the best voice actor outside of the two leads is Nate Torrence as the desk cop leopard, Clawhauser. He generates a lot of laughs.

Overall, despite my gripes about the plot, Zootopia should definitely top your must watch list. It’s a delightful film for both kids and adults and unless you have a heart of ice, you’ll be entertained by the characters. I was surprised at how much I enjoyed it considering the only trailer I really enjoyed was the one with the sloths at the DMV – still a hilarious scene. So, check this one out as soon as possible.