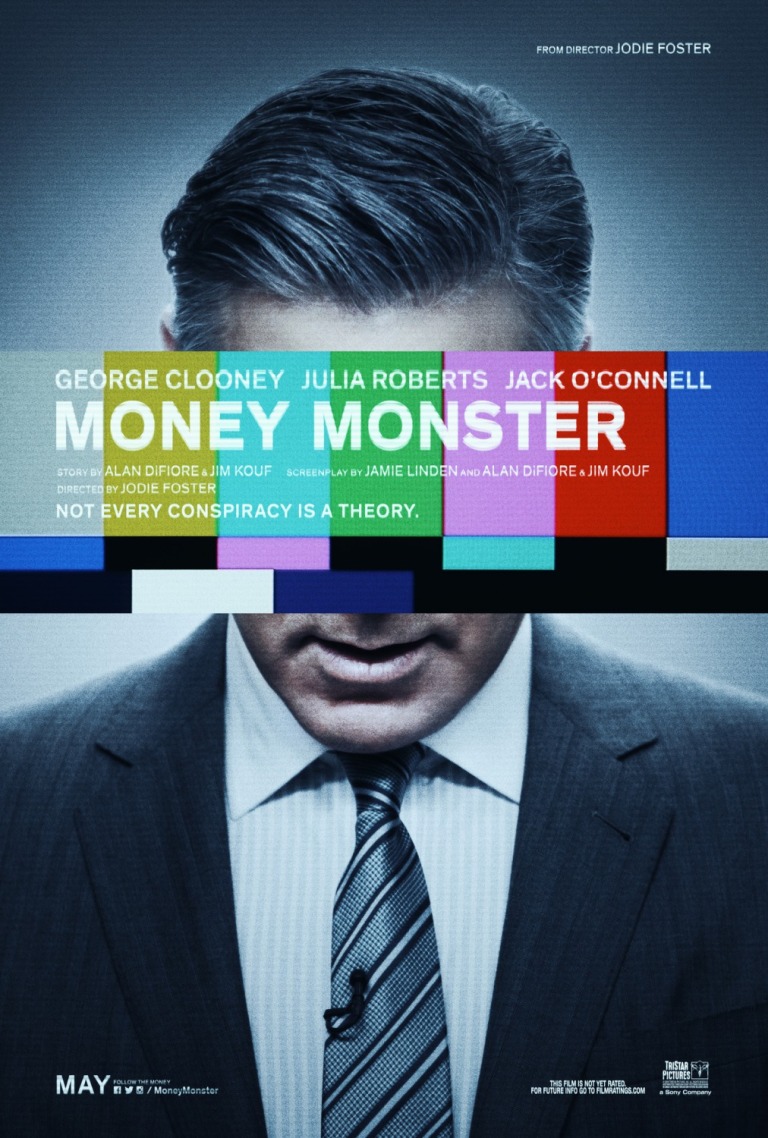 Money Monster, the latest feature from Director Jodie Foster, features an all-star cast and tackles corruption on Wall Street. However, does it make an effective political statement while also serving as an entertaining thriller?

Lee Gates (George Clooney) is the host of Money Monster, a cable financial show in the vein of Jim Cramer‘s Mad Money. Patty (Julia Roberts) is Lee’s longtime and long-suffering director. She’s about to take a job at another network. Why? Because Lee is a vapid and oblivious boss who really only cares about himself. The top stock Lee’s been high on for the last few months is for a company called Ibis, which is run by Walter Camby (Dominic West). However, when Ibis’ stock tanks for fishy reasons, an investor who lost everything, Kyle (Jack O’Connell), decides to take matters into his own hands and sneaks onto the Money Monster set with a handgun and two bomb vests. Patty and Lee work to keep Kyle calm while investigating Ibis to find out what really happened.

While Money Monster has some good tension throughout, it also treads on some very familiar ground. There are no real surprises here, leading to the film to being the strange mix of both entertaining and fairly predictable. I did enjoy the film for the most part, but not nearly enough to totally recommend it. If there had been a novel twist to make it stand out from a sea of other thrillers, that would have helped. The filmmakers probably thought that the Wall Street vs. Main Street angle was an interesting spin on the formula, but we just got an excellent condemnation of Wall Street in the Oscar-nominated The Big Short – and that was about something that really happened. So, even as a diatribe against Wall Street, the film comes up short. That’s also because the criticism is too on the nose here. Kyle is a straight up blue collar worker rebelling against the fat cats. There’s no real subtlety to the whole thing. However, there is a lot of dark humor throughout the film, which was very welcome. Clooney is good at that stuff, which can be seen in his directorial efforts.

The cast does very good work here for the most part. Clooney crushes the role of the confident, but ultimately pathetic Gates, while Roberts does well as the director trying to hold everything together while protecting her people from an apparent lunatic. O’Connell delivers another nice performance and covers a gamut of emotions as the gunman. Aside from the leads, though, the rest of the cast is hit and miss, but that’s mainly due to the shortcomings of the script. West is barely in the film, but he’s fine when he’s in it. The meatier part in Ibis goes to his Communications Officer, Diane, played by Caitriona Balfe. She does well with the role, but some of the writing for the part is wonky. Considering what is revealed in her interactions with West, her desire to get to the bottom of the truth is both understandable, but also a little unbelievable. Giancarlo Esposito is completely wasted in his role as Police Captain Powell, but Christopher Denham does some nice work as Ron, a producer on the Money Monster show.

Overall, Money Monster is a decent film that you should probably just catch on cable. It is neither an innovative thriller, nor a pointed enough social commentary to warrant a visit to the theater.