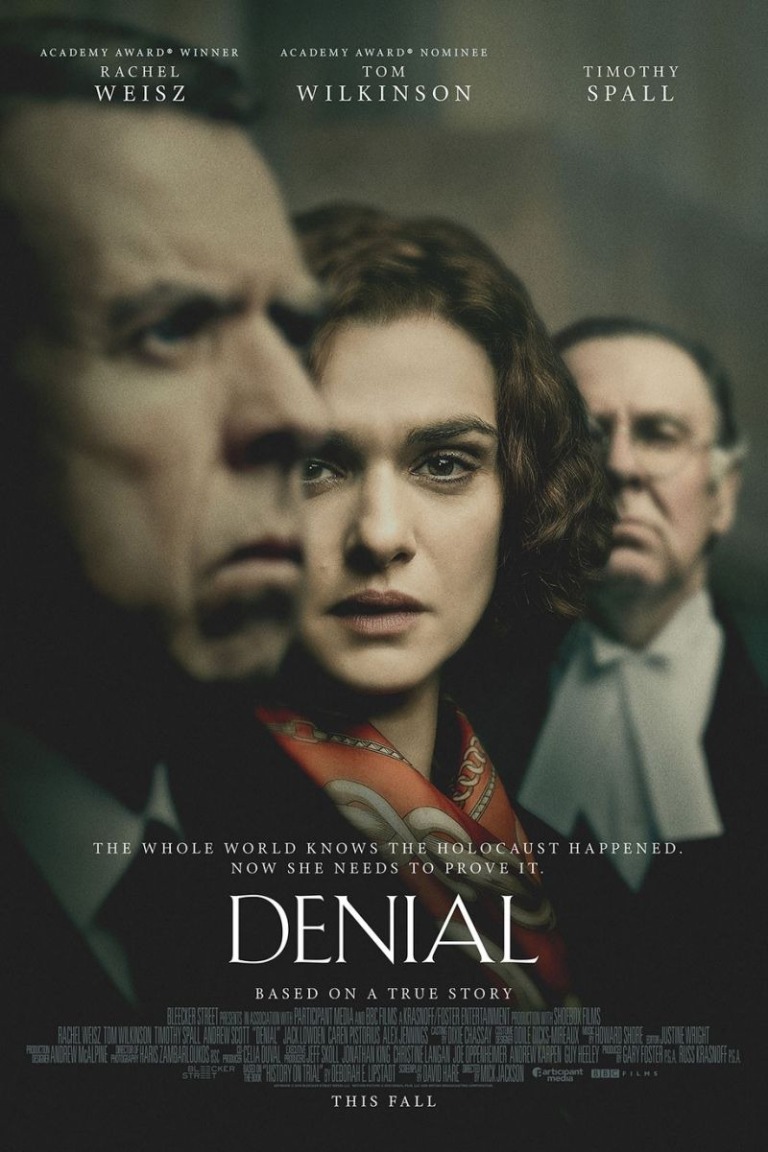 Denial, directed by Mick Jackson, is a legal drama with very high stakes. Losing the case will legitimize Holocaust denial. Does the film entertain as well as inform?

The film takes place in the mid-to-late 1990s and is based on the true story of writer and historian Deborah Lipstadt (Rachel Weisz). Lipstadt is a scholar on the Holocaust and when she calls out a prominent Holocaust denier David Irving (Timothy Spall) as a liar in one of her books, he sues her for libel. The trick is, he sues her in British court, which is the opposite of the American courts system in that the burden of proof is on the defense instead of the prosecution. Basically, if Lipstadt loses her case, then denying the Holocaust becomes totally okay. She assembles a high caliber legal team including Anthony Julius (Andrew Scott), who worked with Princess Diana on her divorce, and Richard Rampton (Tom Wilkinson), who will actually argue the case in court. There are some deeply emotional moments, like when Lipstadt and Rampton take a fact-finding trip to Auschwitz and when Lipstadt has to tell Holocaust survivor Vera Reich (Harriet Walter) that survivors will not be able to testify at the trial—Lipstadt’s legal team wants to keep the focus on Irving and to make him prove his case. The majority of the film is on the legal drama, but is it compelling?

Well, yes and no. The biggest issue with this film is that it all hinges on the fact that Irving sued Lipstadt in British court—her publisher had an office in London—and it is the quirk of British law that drives the drama. In America, the case might have been thrown out from the get go, but because Lipstadt has to essentially prove that Irving willfully lied in his own books about Hitler and World War II, it makes the case a lot riskier. However, the story is definitely interesting and quite emotional in parts. Also, the film really resonates today with the glut of fake news that trolls around the internet getting people of all walks of life worked up about one thing or another. So, the film really spoke to me on that level, especially after dealing with all the fallout of the most recent presidential election here in the United States.

The cast is fantastic here and really drives the film. While Weisz’s accent grated on me a bit—not because she did a bad job, but just because the accent was annoying—she does a magnificent job dealing with the hurt, sadness, anger, and confusion that Deborah goes through throughout the case. Wilkinson is great as Lipstadt’s foil. She’s constantly questioning the way her lawyers are doing things and Wilkinson is the quiet resolve. Once she sees him in action, she realizes just how skilled a lawyer he is. Scott is also good as the smarmy, overconfident member of the legal team. He’s a rock star lawyer and he acts like it. However, Timothy Spall has all the heavy lifting here as he has to play the despicable Irving. You really have to wonder how these actors play such stomach-turning roles without letting it change them. He was a great antagonist.

Overall, Denial is a solid film, but it won’t blow anyone away. The outcome is never seriously in doubt, but if it is, it’s mainly due to the quirks in British law. The real treat here is an interesting chapter in history with fantastic performances across the board.