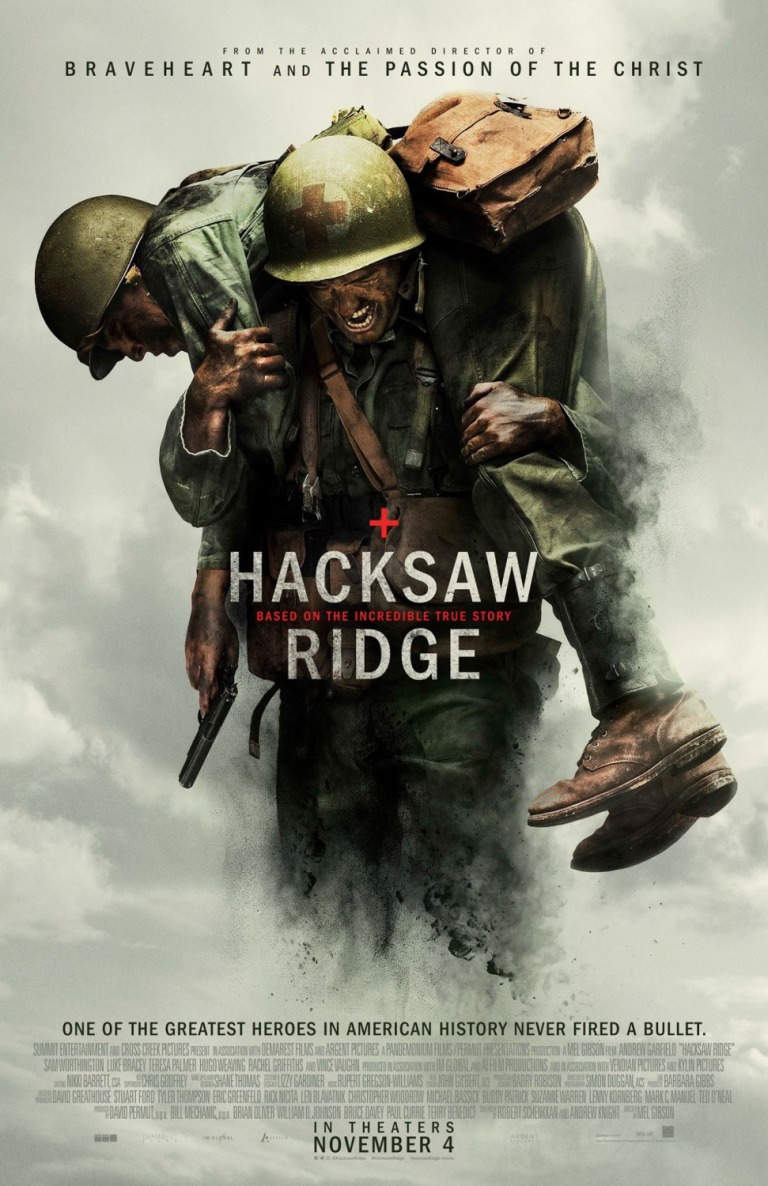 From Director Mel Gibson comes Hacksaw Ridge, the amazing true story of World War II Medal of Honor recipient Desmond Doss. Is the film good enough to spring Gibson from Movie Jail or will he rot there forever?

Desmond Doss (Andrew Garfield) is a deeply religious young man who believes it is his duty to serve in World War II. The problem? Doss is a pacifist who will not even touch a weapon. This causes quite a dilemma for an individual going off to war. His drill sergeant (Vince Vaughn) and captain (Sam Worthington) both try to persuade him to quit, but Doss is adamant that he’ll serve, without a weapon, as a combat medic. The idea to serve as a medic has some of its roots in the fact that Doss falls in love with a nurse, Dorothy Schutte (Teresa Palmer). The guys in Doss’ unit aren’t too happy about his stance either. Those who wish to drum him out of the service are led by Smitty (Luke Bracey), who sees Doss as a coward. When Doss finally reaches the battlefield as a conscientious objector, he more than proves his worth. However, will the challenge of taking Hacksaw Ridge from the Japanese be enough to finally break him?

Hacksaw Ridge is a fascinating story that has, at its core, a deep emotional element. Grown men will be reduced to tears. What was really nice about this film is that Doss never tries to push the beliefs on anyone, but he defends those beliefs staunchly. The same could be said about Gibson for that matter. You feel for Doss and his struggle to do what he believes to be right. The love story is also sweet without being treacly. One thing that may turn off some audience members is the extreme and graphic violence that even made me wince quite a bit. However, this is a war movie and since Saving Private Ryan, it’s to be expected. However, the action is expertly done. Gibson is a master at choreographing action scenes and he blocks it in such a way that the audience is never lost or confused at what’s going on. It’s refreshing in this age of shaky cam and quick cuts. Another issue is that the film feels a little long in parts, but not enough for the audience to lose interest.

The cast does a spectacular job with Garfield leading the way. His accent is flawless and he gives himself over to the role. He really is a talented actor and it kills me that he wasn’t given better material in the Amazing Spider-Man films. Hugo Weaving nearly steals the movie with his scenes as Doss’ alcoholic, PTSD-afflicted father. Rachel Griffiths is also great as Doss’ mother. I really enjoyed Palmer as Dorothy too. She brings a lovely humanity to the film which becomes a lot about man’s inhumanity in the second half. I liked all the soldiers in Doss’ unit, especially Bracey as Smitty, but some of them felt like caricatures at times, especially when we first meet them. Though this is based on a true story, all the guys felt like a “movie” army unit with all of their outsized personalities. Vaughn is very good as the Sarge and hey, we finally got a performance from Sam Worthington that I didn’t absolutely hate! Good for him!

Overall, Hacksaw Ridge is both a thrilling war movie and a touching film about courage and conviction. We need more films from Mel Gibson. Despite his troublesome past, Gibson is a fantastic film director. When it comes to art, sometimes you have to separate the art from the artist and this is one of those instances. The film is easily one of the year’s best and I can’t recommend it enough.