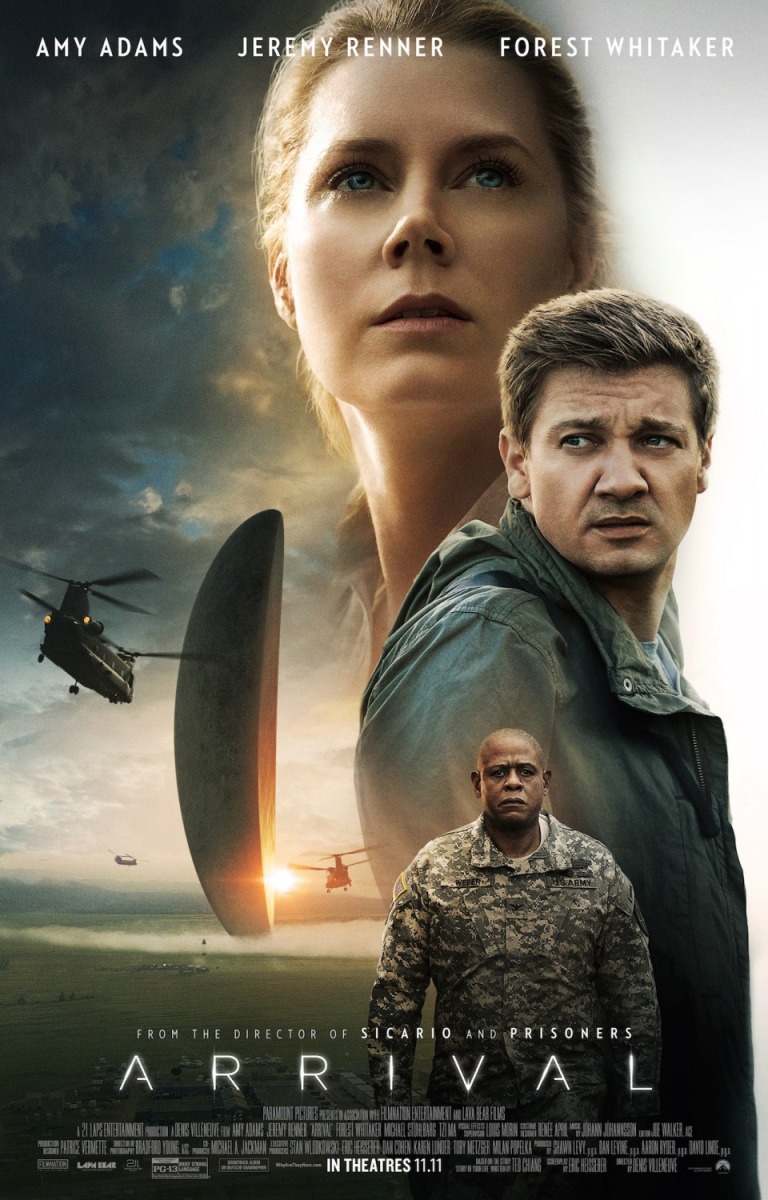 Director Denis Villeneuve is back with the hard science fiction drama, Arrival. Is it up to par with his past work or is it a misstep in his filmography?

Louise Banks (Amy Adams) is a linguist teaching at an American university and dealing with the loss of her daughter. She is approached by Colonel Weber (Forest Whitaker) when twelve unidentified flying objects show up all around the world. Weber, who knows Louise from a previous military consultation, needs her help to try and decode the language of the aliens on board the spacecraft. Louise is teamed with theoretical physicist Ian Donnelly (Jeremy Renner) and the two have to work together in order to figure out where the aliens come from and why they have arrived on Earth. They are on the clock too, as they are reminded by CIA Agent Halpern (Michael Stuhlbarg) that the other countries trying to communicate are not as patient as the United States. The biggest threat comes from China’s General Shang (Tzi Ma), whom the CIA calls “The Big Domino,” if Shang moves, other countries will move with him. Will Louise and Ian succeed or are they simply looking at the start of an interplanetary war?

Arrival is, quite simply, the best film I’ve seen so far this year. It is a very sober and adult take on a first contact story—the screenplay is by Eric Heisserer and based on a story by Ted Chiang. The film avoids a lot of alien movie tropes and maintains an even keel by keeping everything logical and science-based. Also, all the human reactions feel real and well-thought out by the filmmakers. There is a lot of great tension throughout the film as the characters deal with the unknown and work toward really communicating with the aliens. The film shows all the impossibly hard work that would go into such a task. There is no magic wand or translator box that the characters invent—they have to stumble around in the dark like all scientists do when trying to solve a problem. Villeneuve shows just what a skilled filmmaker he is by setting up the puzzle and showing how the characters solve it. A second viewing also showed me how he hints at the twists and turns that crop up in the plot. His work here is Christopher Nolanesque and he has proven himself to be one of the modern masters of filmmaking. The cinematography by Bradford Young is breathtaking and the original score by Jóhann Jóhannsson is both moody and haunting. There is a real eerie quality to the music that will creep you out as you watch the film. The design of the aliens is also very cool and very simple. There are more than a few moments where I was reminded of Villeneuve’s mind-bending Enemy, but Arrival is much more accessible and a better story. This is just an expertly made film on every level.

The film also proves highly relevant to the problems we have in both America and the world and how it seems that no one is able to work together. It is very realistic in that the scientists are eager to work with their counterparts in other countries, but then the governments much everything up.

The cast is simply fantastic. Adams shows why she is one of our greatest actresses working today as Louise deals with her grief as well as the confusion and frustration of trying to solve the aliens’ language. Renner brings his usual cocky swagger to the role of Donnelly, but it is tempered by a calm analytical approach to the character’s problems. I really enjoyed Whitaker as the out-of-his-depth colonel and Stuhlbarg has become one of our most reliable—and one of my favorite—character actors. Tzi Ma perfectly captures quiet dignity in his scenes as well.

Arrival might be the best film of the year. I only say “might,” because I haven’t seen all the other films slated for release this year. The premise sounds like it would be really boring, but the film honestly kept me on the edge of my seat. It deftly mixes science fiction with heartfelt drama and it just works. This is what we need from our science fiction films, NOT Independence Day: Resurgence. I’ve loved Villeneuve as a director since I saw Prisoners three years ago, and Arrival cements him as one of the greats. See this film. You won’t regret it.