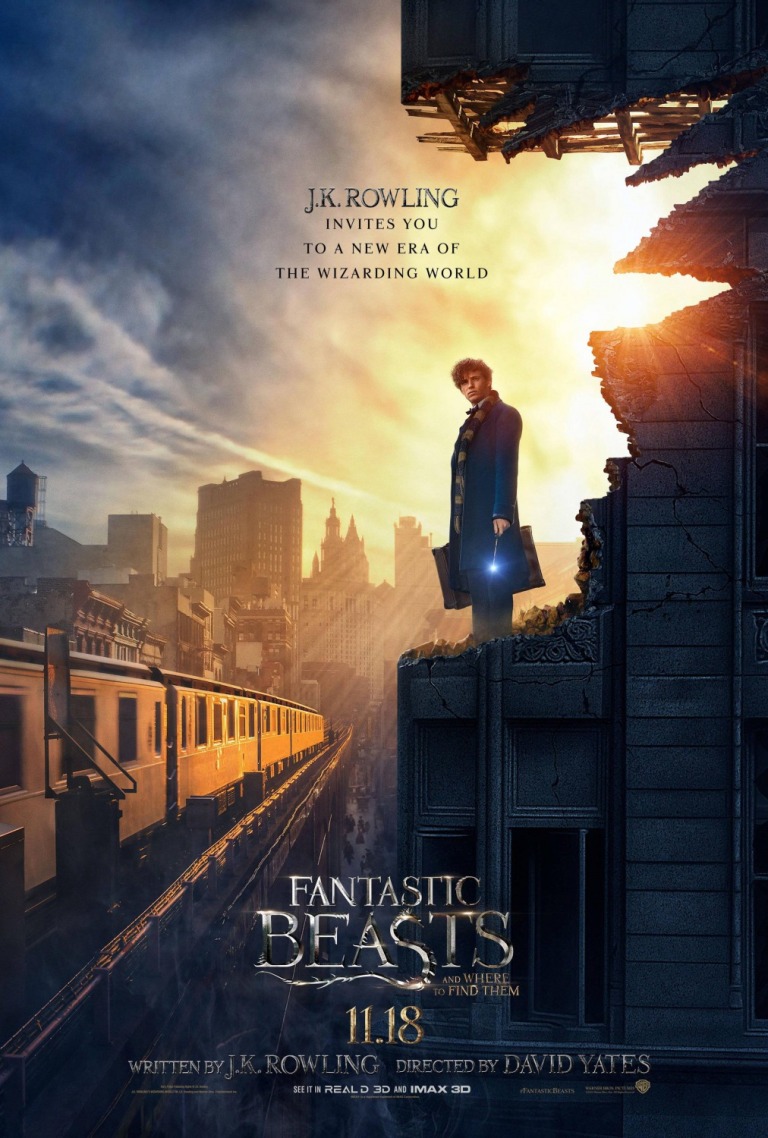 A new saga in the Wizarding World begins as Screenwriter J.K. Rowling and Director David Yates bring audiences Fantastic Beasts and Where to Find Them. Does the film recapture the magic of the Harry Potter series or will it make you long for Harry, Ron, and Hermione?

Before Voldemort, there was Gellert Grindelwald and he is on the loose in the Wizarding World, stirring up trouble and threatening to upend the International Statute of Secrecy that protects those who can wield magic from those who cannot. Grindelwald is especially feared in America, where the statute is taken very seriously. This is the situation that Newt Scamander (Eddie Redmayne) waltzes into when he arrives in New York in 1926. Newt has been travelling the world, collecting all manner of magical creatures in order to study them and teach others in the Wizarding World not to fear them. He keeps them all in his magical case, but he runs into a problem when some of his Fantastic Beasts escape and his case gets switched with another belonging to aspiring baker Jacob Kowalski (Dan Fogler). As Newt bumbles around New York trying to fix the situation, he draws the attention of Tina Goldstein (Katherine Waterston), a former auror with the Magical Congress of the United States of America (MACUSA). Tina and Newt go off in search of Jacob, who has been bitten by one of Newt’s creatures. Newt doesn’t want to erase Jacob’s memory and neither does Tina, who needs him as a witness to Newt’s law-breaking. So, she takes the two of them into her apartment where they meet her sister, Queenie (Alison Sudol), who can read minds. Now, the quartet must find Newt’s escaped creatures before they reveal the magical world to the “No-maj” (the American version of Muggle) community. Meanwhile, a MACUSA auror, Percival Graves (Colin Farrell), is in search of a child he foresaw having great power. He enlists the help of Credence (Ezra Miller), whose adopted mother, Mary Lou (Samantha Morton), is a anti-magic zealot. Will Newt succeed in finding his Fantastic Beasts or beyond that, escape prison? And what of this mysterious child? Will his/her power expose the magical community or worse, destroy New York City?

Pardon the luggage pun, but that’s a lot to unpack for a single film. And it’s even more difficult when you have a first-time screenwriter. Some of the problems Fantastic Beasts has come from these two aspects of the filmmaking. While the world that Rowling creates here is deep and overflowing with imaginative elements around ever corner, the character development suffers as a result. While it’s definitely important for Rowling to establish this new arena in the Wizarding World, it cannot be forgotten that what made people all over the world fall in love with her Harry Potter novels and subsequent films was the characters. People cared about Harry, Ron, Hermione, and the rest, so going forward with this new film series, (there are supposedly going to be five films in all), much more attention needs to be paid to the characters and their relationships. I’m sure she and Yates will get there, but in this aspect, Rowling’s lack of screenwriting experience showed. Another place it showed was in the pacing of the film. Because she and Yates are juggling so many balls – I didn’t even get into the underdeveloped Shaw family and how they figure into the story – the first half of the film feels a bit herky-jerky as the mammoth endeavor lurches forward. As the story starts to streamline about halfway through, things get a lot smoother. I also rolled my eyes a bit at how coincidental the initial meeting of Tina and Newt is. One final problem I had with the script was that the threat Grindelwald poses is front-loaded into the first five minutes of the film and then kind of dropped as the rest of the plotlines take over. The villain’s reveal is very telegraphed and I called it immediately. The film would have been better served in just mentioning Grindelwald throughout the film to keep him constant in the audience’s collective mind, but never showing too much. However, if you were writing a novel, the way Grindelwald is introduced to the audience – in a kind of prologue – is actually perfect. So, again, if Rowling had been paired with a more seasoned screenwriter, some of these pitfalls might have been avoided.

Unfortunately, these missteps with the script take away from what is a very enjoyable film. The biggest selling point here is the return to the Wizarding World that Rowling introduced audiences to in the Potter novels. The world itself is just so imaginative and immersive that it’s easy to forgive some mistakes that would sink lesser films. Newt’s creatures are fun and, in some cases, hilarious. It was also great to see this world through the eyes of an all-adult cast too. I loved seeing skilled wizards and witches using their powers for once as opposed to seeing a classroom setting and children fumbling through their lessons. If the Fantastic Beasts series is the success Warner Brothers hopes it will be, don’t be shocked if we get an adult-aged Harry Potter series in the future. Despite the overall lack of in-depth character development, I liked most of the characters. I absolutely loved Queenie and Jacob and they pretty much steal the film. Newt is interesting, but he’s also very awkward and shy, which leads to Redmayne mumbling a lot of his lines. I felt like I needed subtitles for some of his scenes. I actually expected him to be more gregarious since he’s kind of an adventurer, but alas. Tina is fine, but she is the main character who suffers the most from the lack of character development. There is a scene where she gets a little weepy over Newt and I was like, “Wait, are they even friends?” So, again, a couple of nice quiet scenes between them might have helped smooth that over. Despite any gripes, though, I definitely look forward to seeing these characters again. I’m also a little afraid that compared to Voldemort, Grindelwald might feel redundant in retrospect. I mean, there’s a reason why all the Siths before Darth Vader are basically clods. However, while Voldemort is Magic Hitler, Grindelwald seems more like Magic Magneto, so we’ll see how Rowling and Yates handle it. There was also an issue with some of the characters coming across a little blasé about everything going on around them. I couldn’t tell if that’s because these wizards and witches have seen everything before or if the actors are just terrible acting with the CGI. If it’s the latter, we can only hope they get better, but again, I’ll mention the Star Wars Prequels – Natalie Portman never looked comfortable on those imaginary sets. There are also a ton of Harry Potter Easter eggs throughout the film that will delight fans, so be on the lookout for those.

The cast does a good job here. I liked Redmayne quite a bit as Newt, but again, he does mumble some of his lines. This is something you can get away with in a novel, but in a film, you’ve gotta enunciate, man. He is a likable character, though, and I look forward to going on more adventures with him. Waterston does a fine job with what she’s given, but Tina is kind of the straight man character and not a lot of fun. She’s very much like an adult Hermione – all into rules and such – while Newt is very much the adult Harry – you discover that Newt is kind of an outcast, much like our Mr. Potter. So it may be that in this situation, familiarity breeds contempt, though that’s far too strong a word. Fogler and Sudol are fantastic as Jacob and Queenie. The two of them have great chemistry together and the screen lights up when they appear. Kudos to the actors for bringing the characters to life, but also kudos to Rowling for crafting such a likable pair. Morton is practically terrifying in her role, but Farrell could have shown me a little more. I think his performance suffers from the fact that we as an audience never really know what Graves wants. Is he a villain or an antihero? We’re never sure and Farrell’s performance is hindered by this indecision. Miller is very good as the abused Credence, which is different from any other role I’ve seen him in before. Carmen Ejogo is very good as U.S. Magical President Picquery, and it says something about her performance when I mention how much I despised the character. She’s a mean lady.

Overall, the verdict on Fantastic Beasts and Where to Find Them is: good, but not great. There’s a lot to like in this film, but there is an equal amount of missteps that probably should have been worked out prior to filming. Rowling and Yates get a lot of leeway considering their past output and I definitely look forward to seeing more of these characters. Hopefully going forward the script issues will be resolved and we can see something truly magical in theaters.